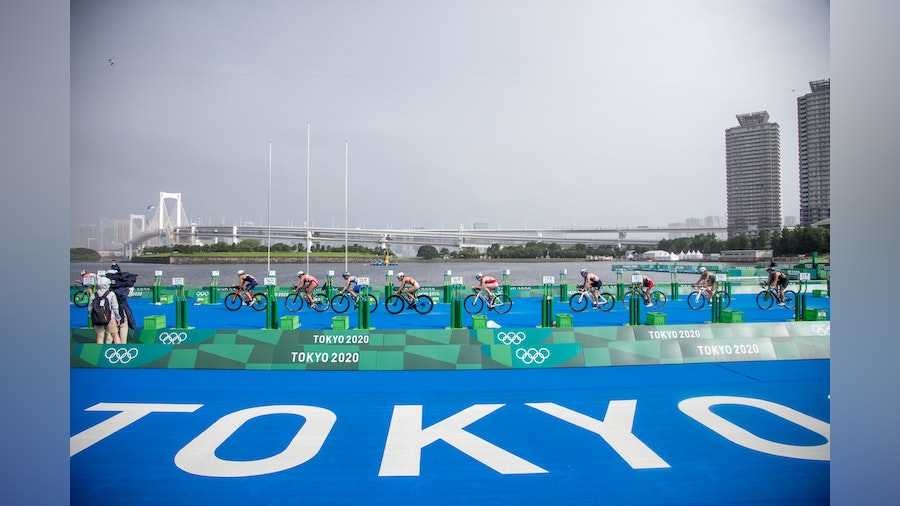 Tokyo 2020. Postponed by a pandemic, constrained by Covid but, ultimately another inspirational Olympic Games and another unforgettable chapter in the history of triathlon. It may have been a year late, but hosts Japan stepped up and delivered all the excitement and exhilaration that the world so badly needed, including two individual triathlons and one Mixed Relay Olympic debut in and around Odaiba Bay that you couldn’t take your eyes off for a second.

—
MEN’S RACE
The men were up first, and on a hot and humid early morning their podium looked wide open with at least a dozen serious contenders for the biggest title in sport. Among the favourites was Frenchman Vincent Luis, and it was he who led the field out of the water and into the first transition. By the end of a technical 40km bike, and after a couple of dice rolls by Jonas Schomburg (GER) and Stefan Zachaus (LUX) had mixed things up temporarily out front, only 10 seconds separated the top 39 athletes.

The front pack was then slowly but surely whittled down across the 10km run so that by the closing stages the medal places were to be decided by just three men, Norway’s Kristian Blummenfelt emerging triumphant after a devastating final surge took him clear of Great Britain’s Alex Yee and New Zealand’s Hayden Wilde over the final lap of the 10km run. Blummenfelt’s victorious bellow said everything about the 10-year journey he had been on to becoming the first man touching the Tokyo 2020 tape.

“It really felt like all the years of work was coming down to one race and it made it all the more satisfying to pull it out,” Kristian Blummenfelt told the World Triathlon Podcast. “Coming through the last aid station before the beach I knew it was time for the last push… but it was a really strange feeling over the last hundred metres knowing it was really happening. Touching that tape was something I’d been dreaming about for so many years.”

—
WOMEN’S RACE
The women woke up to a Tokyo typhoon the following morning, and took to the pontoon ready to face down the testing conditions to chase their Olympic dreams. Britain’s Jessica Learmonth led the way through the water with teammate Georgia Taylor-Brown and USA’s Katie Zaferes for company, Flora Duffy delivering a brilliant swim to ensure she made the front pack of seven out onto the bike course.

The slick surface made the 40km bike a huge test of concentration and skill, and while several came off further behind, the leaders were able to safely carve their way through it and out to the run, only a late puncture for Taylor-Brown upsetting her rhythm. Duffy seized the moment and put the hammer straight down, never letting up the pace for the full 10km to land the Olympic gold she and the whole of Bermuda craved, and with the kind of dominant performance we have come to know and love. Georgia Taylor-Brown bounced back bravely over the final lap to win silver, and USA’s Katie Zaferes took a fine bronze.

“A lot of emotions came up down that final straight,” Flora Duffy told the World Triathlon Podcast. “Everything from the past few years, the pressure and expectation of being Bermuda’s only medal hope is quite something to manage. All of that and knowing that on the one day that mattered I executed one of my best race performances was really special and I was thrilled for Georgia and Katie.”

—
MIXED RELAY
The build-up to the Mixed Relay debut had been intense, the anticipation huge and the action did not disappoint as Great Britain’s Alex Yee hung on to the tightest of leads for the final 2km run and bring home the first ever Mixed Team Relay Olympic golds. It was a grandstand finish after Vincent Luis had brought France right back into the hunt, but it was to be the USA and Morgan Pearson eventually passing the Frenchman to earn USA the silver.

Jess Learmonth had got GB off to a great start only for Laura Lindemann to thrust Germany into the lead as she handed over to Jonas Schomburg, Kevin McDowell taking up duties from Katie Zaferes for USA. It was then that Jonny Brownlee hit his stride, delivering the fastest leg to leave Georgia Taylor-Brown in a great position as she took control. Cassandre Beaugrand ran France right into contention as she tagged Luis, Taylor Knibb handing to Morgan Pearson and the two were giving chase to Britain’s Alex Yee.

Luis was motoring and eventually caught and passed Yee at the bell on the bike, but the young Brit responded, stuck on his rear tyre, and a slick T2 saw him out with daylight behind him once more. That was all the advantage he needed to ensure gold was going to GB, while Pearson eventually took Luis to earn USA silver, France scooping the bronze.

“It was probably the most clinical relay performance there has been,” said Brownlee on the World Triathlon podcast. “Everyone’s transitions were perfect, it all worked really well. I don’t know if it was practice, mindset a bit of luck or all three, but we put together a brilliant race and what we needed to do.”