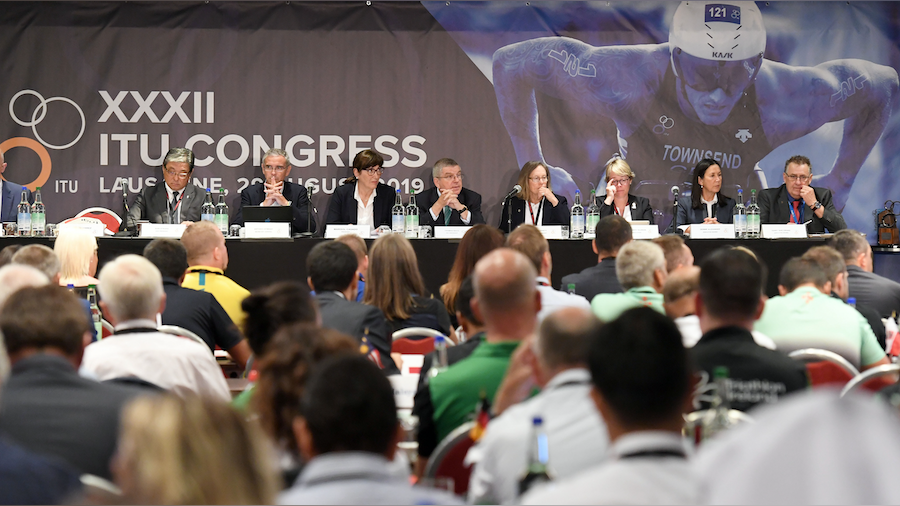 Thursday in Lausanne, Switzerland, saw the 2019 ITU Congress held in the Olympic capital, bringing together 73 member Federations to the latest annual gathering of the World Triathlon family. Among the points of business were the announcement of the new World Cup and Paratriathlon calendars for 2020, in-depth reports from the 2019 Tokyo Test Events, a new mentorship programme and the approval of American Samoa as the 172nd member of the International Triathlon Union.

Among the guests were IOC President Thomas Bach, who spoke of his admiration for the modern, values-based thrust of ITU as an organisation under the leadership of Marisol Casado. The ITU President expressed her gratitude for Mr Bach’s commitment and guidance, and for his admiration for the sport of triathlon and its athletes: “The athletes are at the heart of every decision we make as an organisation and their commitment to the sport is incredible, so I am very proud of the support Thomas Bach has shown to ITU,” she said.

The final selection of the company chosen to deliver the ITU mentorship programme was also announced on Thursday. Helmed by Norman Brook, who has worked with Olympic coaches and received an MBE for his services to social development through sport, Brook Sport Consulting will deliver a mentorship programme across all areas of the sport, from coaches to Technical Officials, including a specific focus on women in the sport.

“ITU is maybe the International Federation that has most embraced the Olympic agenda 2020,” said Thomas Bach in his address to Congress. “The IOC is proud of the close cooperation it has with the ITU in respect of good governance as well as gender equality, which is in the interests of every organisation. So I thank Marisol Casado for all she is doing with ITU.”

Julie Duffus from the IOC gave a presentation on sustainability in sport, while IOC Sports Director Kit McConnell also followed Thomas Bach onto the stage to reflect on the success of the Tokyo Test Event and look ahead to next year’s Olympic Games.

The organising committee of the Edmonton 2020 Grand Final gave a preview of their plans as hosts of next year’s World Championships as the triathlon family prepared for three days of racing in the Olympic capital of Lausanne.