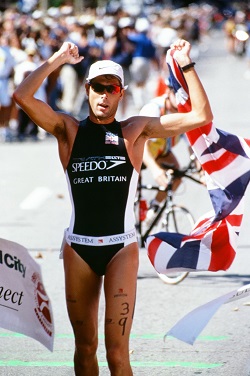 In the first 25 years of International Triathlon Union events, some athletes might have competed in more races, but none had more success than Simon Lessing. As the only athlete to capture four ITU World Championship titles, as well as two silver medals and one bronze, Lessing has been the most consistent performer on race days.

Lessing was born in in Cape Town in 1971. According to Boulder Coaching, he had an early love of outdoor sports and by the end of his fifth year at school had won provincial honours in swimming, sailing and biathlon and was a successful cross-country runner. When Lessing was nine, his family moved to Durban.

In the 1980s in apartheid ruled South Africa, Lessing rebelled against the status quo. One time he and a friend removed all the duplicate books from the storeroom of the school library and gave them to a nearby black school that had none. He also made sporting sacrifices; in 1987 he pulled out of a prestigious athletics meeting in protest for a black student who was not allowed to compete.

As a talented athlete, Lessing was pressured to take up South Africa’s No.1 sport, rugby, but stayed true to his other loves. At 14, his triathlete swim coach suggested he give a new sport a go.

“I pretty much fell in love with triathlon the first time I tried it,” he told Triradar. “Triathlon complimented the foundation that I’d set myself as a youth with regards to swimming and running. People often ask me how I found triathlon. I actually think triathlon found me. I found what I was good at, quite honestly. When you’re good at something it motivates you and creates an interest. It was just the element of something completely different and new, but bringing in elements of two sports which I was pretty good at.” 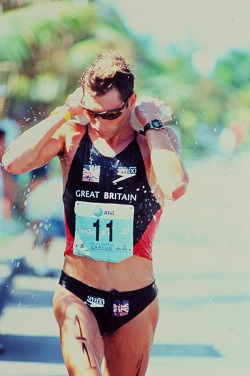 In 1988 Lessing was South African national champion, but after he finished high school he wanted to compete internationally, he made the decision to represent Great Britain, his mother’s home nation. At the time South Africa was banned from competing in all international sporting competitions due to apartheid.

Of all of those memories, it’s the consistency across his career that he is most happy with.

“The one thing I would say I’m proudest about is not a particular race or result, but my consistency – the fact that I could race from 1989 through to 2007 being as consistent as I was,” Lessing said in a 2010 interview with triradar.com. “For me, triathlon is about who you beat and what position you came. If you can prove your consistency in that, that defines who you are as an athlete and whether you are a success or not.”