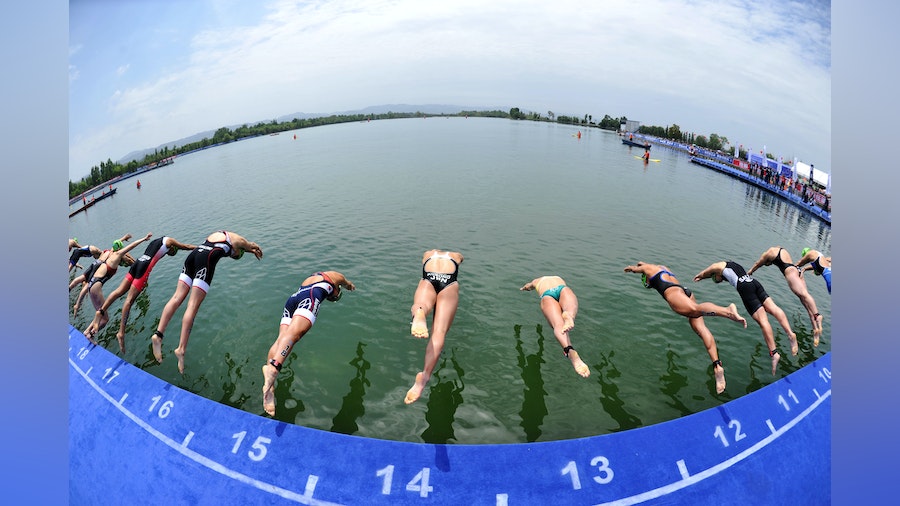 Heat 1
Russia’s Dmitry Polyanskiy proved he still is a master of the multi-round triathlon as he took the top honour in the men’s semifinal round one. Polyanskiy, who won the semifinal race and final in last year’s Tiszaujvaros event came out on top and earned his way to reclaim another title in Sunday’s “A” Finals. Taking second place was Hungary’s Gabor Faldum, while Joao Silva of Portugal took third.

Starting off the semifinal rounds, the men’s first heat dove into the water and after a quick 750-metre lap, China’s own Zheng Xu exited the swim as the leader. While he tried to get a lead on the bike along with Korea’s Seung Hun Seo, they were eventually caught.

Onto the run, a small group of men ran through the two laps together, and while the finish was a tight race, it was Polyanskiy who pushed through to take the win.

Polyanskiy said, “I am feeling very good, for me it is like a warmup. But on the last run I had to give a little push because there was a lot of people. I like racing in China, I was here about 7 or 8 years ago and the people are always very nice, nice people and nice organization. Tomorrow will be an experience for me, but we will see, I think it will be a great race tomorrow.”

Heat 2
A Photo finish was needed to see the winner of the second semifinal, with Lukas Hollaus (AUT), Luke William (AUS) and Tyler Mislawchuk (CAN) crossing the line together, and the victory finally going to the Austrian.

The Canadian, along with Chinese favourite Chen Liu, was leading the group out of the water but the frentic chase on the bikes led to a big group going for the run together, including also Makoto Odakura (JAP), Rostislav Pevtsov (AZE) or Stefan Zachaeus (LUX).

Hollaus, who started his season brilliantly with a sixth place in Cape Town, showed his skills on the bike and managed to keep a bit of a distance until the final meters of the race, enough to let him fight with William and Mislawchuk for the win.

Mislawchuck said after the race: “It was a very interesting race, we all saved some energy for tomorrow, but it will be interesting how the final, with the super sprint, will go. It’s great to experiment with different formats. I love Olympic distance, but is also great to have some sprints and this semi final and final format, and it will be great to have also relays. It’s great for our sport to have different and new formats”.

Heat 3
Mexican Rodrigo Gonzalez showed that he knows well the circuit in Chengdu, where he won his first ever World Cup event last season, to win again his semifinal, guaranteeing himself a great spot on the pontoon for the A final tomorrow.

Two of the best swimmers of the circuit, Russian Igor Polyanskiy and Slovakian Richard Varga, led the group during the swim, slightly different tan last year, but the three laps of the bike course were enough to form a big group of 18 triathletes and gave some time for the strategies, with most of the athletes saving some energy for the finals and keeping an eye on their direct rivals to make sure that no one would have a great lead and would break the group.

“Today was supposed to be a day to just keep on with the group and not pushing too hard, but at the end I was feeling very strong. I could have gone much faster, but it was all about controlling the situation” said Gonzalez after the semifinal. “After winning last year, for me Chengdu has a special meaning and to cross the finish line first again was very special, but I know that tomorrow is the day that counts”.

The final three spots to make up the 30-man roster for the “A” Final race on Sunday were earned by Mingxu Li (CHN), Xavier Grenier-Talavera (CAN) and Zheng Xu (CHN), who finished over a minute ahead of the finallists from the second heat.

The remaining men who finished in the 31st-60th position will compete tomorrow in the “B” Finals pool.

Heat 1
In a sprint to the end that required a photo finish, Australia’s Emma Jeffcoat claimed the women’s semifinal heat one race. Coming in second by only a nose was Great Britain’s Jessica Learmonth, while her compatriot Sophie Coldwell took third.

Learmonth led out of the water alongside her fellow Brit and training partner Lucy Hall, while USA’s Kirsten Kasper was just behind. The three joined forces on the bike along Jeffcoat and some others and made a gap that carried out into the run.

The ladies stuck together throughout the whole race and it was on the blue carpet where the race heated as a group dashed to the line, but ultimately it was Jeffcoat who inched ahead.

“It went well, we all went well really. We kept a little chain gang going with the six of us and it was a nice tempo and then after the bike we knew we had a gap going, so we just kind of tempo-jumped the run. It was quite nice, game on tomorrow,” said Learmonth of finishing and making it into the finals.

The women’s second semifinal was again a demonstration of caution and saving some energy for the Final, to be held tomorrow, with Belgian Claire Michel crossing the finish line first, folowed closely by Yuka Sato (JAP) and local hero Chunyan Xiong (CHI).

The three of them ended up leading a big group of athletes controlling all their movements, with one of the big favourites, British Non Stanford, keeping the race under control to assure herself a spot on the Final A spending too much energy.

“I felt really great during the whole race, and I’ll be ready for tomorrow as well”, said Michel after the race. “I had a pretty good swim, and we kept the control on the bike so we could all see where we were on the run, keeping an eye on everyone”, she said.