Top triathletes meet in Kitzbühel for the European Championship crowns 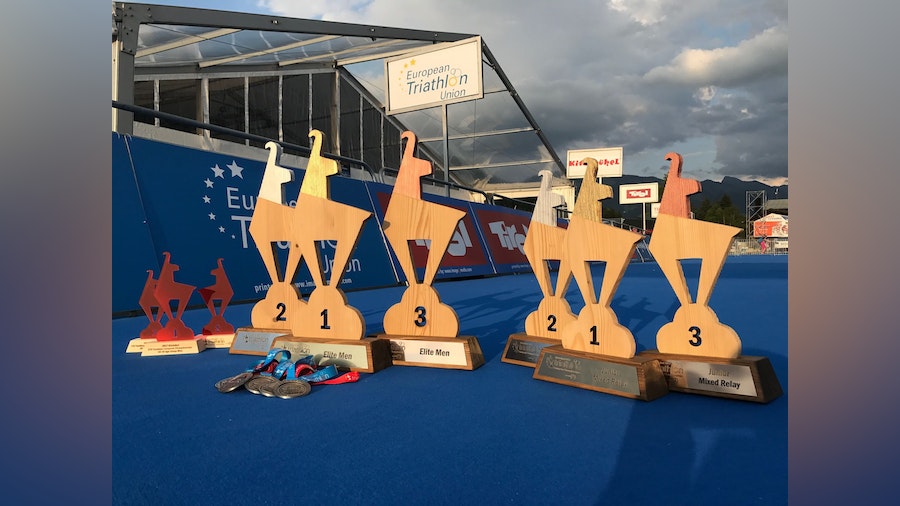 Kitzbühel has filled with cars carrying bikes, with athletes riding bikes and with mechanics working on bikes as Europe’s best athletes have moved to this delightful Austrian town for the ETU Triathlon European Championships. With Elite, Juniors, Para and Age Group athletes gearing up to race over Standard and Sprint distances (The Elite and Age Group Sprint events take place soon in Dusseldorf), it all starts on Friday with the Para Races.

Kitzbühel may be famous for its legendary downhill race, the Hahnenkamm but for this week, it is once again the triathlon capital of Europe with up to 1,000 athletes, supported by their families, team managers and support teams. The athletes were welcomed by the schoolchildren of the city. The many national uniforms were visible as we walked around the town last night and the lake, at a comfortable 24C, was the place to be in the glorious sunshine.

Women’s Preview
India Lee GBR, reigning European Champion, was spotted out and about, in the company of Sophie Coldwell and Jessica Learmonth. Lee had a bumper year in 2016, with victories in Cagliari and Lisbon, where she took the European title. Coldwell has raced exceedingly well this year with a victory in Quarteira and a 4th in Yokohama. The British women are really to be feared as they are so strong in the water and then, once out on the bike, have shown again and again that they can really tear the race apart with text-book attacking riding that creates a huge gap between them and the chase group. With a likely non-wetsuit swim this weekend, then this is surely a tactic they will be aiming to use.

Swiss hopes will rest upon the shoulders of Jolanda Annen who raced so hard over the immensely difficult Cagliari course a couple of weeks ago. Annen, more used to the climate here that the Brits may have the advantage and can be looking forwards to at least a top 5 finish. Belgium’s Claire Michel had a great victory in Rotterdam last year and with a bronze in New Plymouth and a top ten in Yokohama, she is in good form.

Russia will field three athletes and each of them, one a good day, is able to get to the podium. Mariya Shorets, as current World Aquathlon Champion needs to find just a little more speed on the bike to ensure a good finish here and against Anastasia Abrosimova, with a bronze in Quarteira earlier this year and Elena Danilova who won the Sharm El Sheikh ATU Sprint Triathlon African Cup and Pan Arab Championships race in April this year, the Russians are definitely in with a medal chance.

The local cheers will be loudest for Sara Vilic who has already raced to the podium in Abu Dhabi this year and for Lisa Perterer. Zsófia Kovács HUN won the bronze in Lisbon will be racing and, following Cagliari, will be hoping to get closer to the podium. Vendula Frintová CZE will be also hoping for a better result than Cagliari where she DNF’d.

Italy will be pinning its hopes upon Alice Betto whose bronze last weekend in Leeds is a sure sign that she is on form.

The Elite men have 24 nations racing and amongst them are some of the biggest names on the circuit. Fernando Alarza is in fine form at the moment and has been on the podium in his last three top level races. Accompanied by both Vicente Hernandez and Uxío Abuín Ares the Spanish will be seeking to create an early lead. They will be racing against Azerbaijan’s Rostislav Pevtsov whose victories in Gran Canaria and Rabat and a silver in Chengdu over the super-sprint distance, suggests that he will have the ability to kick hard if it goes down to a sprint finish.

Denmark’s Andreas Schilling has mixed and matched the distances in the past two weeks with a solid race in both Cagliari and Leeds but will have to dig deep to keep ahead of the Russians, who are fielding a big team of immensely experienced athletes. Alexander Bryukhankov is joined by both Polyanskiy brothers. Dmitry is currently playing catch-up to his younger brother Igor whose results so far this year have been better but knowing that neither brother is one to give up, we can expect to see them push all the way home. For Vladimir Turbaevskiy three of his last four races have seen him on the podium. His mind may well be elsewhere as in the next few days he is due to become a Dad … what a great present a medal here in Kitzbühel would be !

We can all expect Richard Varga to lead the swim. Current ETU Aquathlon Champion, following the great success of Bratislava, he will be there at the front of the swim and bike and with a 32;34 10k to finish in Leeds, he may well make the top five here. Watch out for Switzerland’s Adrien Briffod. His gold in Cagliari, where he kicked on the run and dropped the Rio Bronze medallist showed not only his pace but also great timing.

Junior Women’s Preview
The Junior Women will have 25 nations racing for medals along with a visiting athlete from Bermuda. Russia’s Ekaterina Matiukh put together some good results in 2016 and raced some sprint events against Elite athletes, notably Tønsberg, where she won silver against some strong competition. From France comes Jessica Fullager who started the season with a great victory in Quarteira and from just over the water comes Britain’s Olivia Mathias who won the Junior race in Holten last year but who struggled in Cozumel. But all had better watch out. Austria has a secret weapon. Her name is Pia Totschnig and she had a hugely successful 2016, with victories in Tulcea and Zagreb and a silver in Bled. Her pace off the bike is amazing and on home soil, she is the one to watch.

Junior Men’s Preview
The Junior Men give us the biggest start. A massive line-up of athletes from all over Europe will thrill the spectators. The course is tight and the chance to accelerate out of the bend, or push hard on the climbs will suit these young athletes. Still buzzing with the delight of the title, “European Champion” from his Bratislava victory and his gold last year in Alanya Gergő Soós will be looking to add another title to his collection. The Russian Antipov twins,  Grigory and Mikhail will do their best to work together either alone or in the pack. Of the two, Grigory has had better results and his final run off the bike in Soria, shows he has pace. Youri Keulen NED raced an open event last week in Weert as a warm-up for this weekend. He looked good and can start in Kitzbühel with confidence. Vasco Vilaça has been training much more in the Northern part of Europe than in the warm south and might find the heat a problem but in the heat of Cozumel, his top ten place put him in good form for the bronze in Quarteira at the start of the season. Keep an eye open for Spain’s Alberto Gonzalez García  who took gold there and for Slovenia’s Matevž Planko; a silver in Bled, a 7th in Cozumel and a bronze in the duathlon in Soria put him is a good position for a medal.

Para races Preview
There will be a huge Para line up. With the PTHC category racing first we have, from Spain, the 2016 Duathlon World Champion and the 2017 Duathlon European Champion, Eva María Moral Pedrero. She will be up against GB’s Karen Darke who returns to racing after her 2014 Kitzbühel silver. She will have teammates, Jade Jones who placed second in Yokohama and reigning European Champion, Lizzie Tench. Ireland’s Fiona McCormack took bronze in Lisbon so the battle for the podium is going to be exciting as these women race each other over this testing course.

In the PTVI Category, amongst the women, we have more Olympians. From Great Britain, we have reigning ETU Champion, Alison Patrick. Her silver in Rio was added to her Rotterdam gold and this year she started in Yokohama with gold. Melissa Reid was just behind her in Lisbon to take the silver and came away from Rotterdam with bronze. They will be racing against Spain’s Susana Rodriguez who won bronze last year in Lisbon and who is the reigning ETU Duathlon Champion.

For the men we have the defending European triathlon and duathlon Champion from Spain, Héctor Catalá Laparra. With a gold in Geneva, and then silvers in Chicago, Lisbon and Rotterdam, Ukraine’s Vasyl Zakrevsky will be wanting to put the misery of a DNF in Besançon behind him and, if back to his usual pace, will be in with a good chance for a medal. Jose Luis García Serrano ESP took the world title in Rotterdam and could also edge towards the podium.

In the PTS2 Category, Veronica Yoko Plebani ITA comes with a Besançon gold still fresh in her memory but with silver in Lisbon and Rotterdam and a 4th place in Rio, it is Finland’s Liisa Lilja who looks strongest.

For the men, clear favourite is Great Britain’s Andrew Lewis. The reigning European, World and Olympic champion will face, amongst others, Michele Ferrarin who took silver in Rio and bronze last year in Lisbon.

In the PTS3 category, Anna Plotnikova RUS won gold in quite difficult conditions in Otepää at the ETU Winter Triathlon Championships and most recently gold in Yokohama. She will face the powerful Elise Marc FRA, who won in Besançon and who will seek to defend her title, won last year in Lisbon. Due to the reclassification process, Germany’s Nora Hansel will face Marc. Ever so slightly slower over the Lisbon course, this could be the inspiration needed to push that bit harder.

Spain has two athletes racing against each other in the Men’s PTS3 category. Daniel Molina, who won in Yokohama will go head to head against Quini Carrasco, reigning ETU and ITU Duathlon Champion.

PTS4 sees one female competitor, GB’s Cassie Cava. As reigning British Champion she has the European title in her sights now. For the men, a silver in Lisbon last year for Denis Kungurtcev RUS was followed by gold in Rotterdam. Fellow Russian, Mikhail Kolmakov placed 2nd in Yokohama but was ETU Middle Distance Triathlon Champion after his great race in Walchsee last year. All will be aware that from France, Alexis Hanquinquant is reigning World Champion and that he followed that title-winning race with golds in Gold Coast and Besançon.

In the final category, PTS5, the Olympic silver medal-winner, from Great Britain, Lauren Steadman returns after a rest. Defending European Champion, she will be keen to secure this title after crashing in Rotterdam. One of the youngest athletes on the Para circuit comes from Ukraine. Alisa Kolpakchy had a top-ten finish in Rio and in Lisbon but a top 5 finish in Rotterdam but Anna Bychkova RUS and France’s Gwladys Lemousssu could be the challenge to Steadman in this race.

Amongst the men, it is going to be a delight to watch Germany’s Martin Schulz race. He holds more titles, European, World and now Olympic than anyone else and is so immensely powerful across all three disciplines that he has to be race favourite. Silver medal in Lisbon went to Spain’s Jairo Ruiz López. He then went on to win bronze in Rio and will surely be one to watch. Coming to this race after taking gold last weekend in the ETU Challenge Middle Distance Triathlon Championships, is Hungary’s Péter Boronkay.