ITU recently held a youth development camp for athletes and coaches in Rio Maior, Portugal, with the aim to build the future triathlete stars of tomorrow. While athletes received a week of specialized instruction, coaches served up some advice that’s applicable to us all. Whether you are starting out in the sport of triathlon, or just starting up another thrilling season, these words of wisdom work for everyone.

It takes passion
Spain’s Andreu Alfonso was on site to offer the athletes cycling tips as the head bike coach of the camp. As the longest discipline in a triathlon, developing the biking part of a triathlete’s race is integral to their overall success. But as Alfonso cautions, hard work had to be done to become a good biker.

“It takes many, many years. It’s not easy to reach a good level for running or swimming, but especially for cycling it takes a long, long, long time. So athletes and coaches must have passion.”

Blend it up
Triathlon is a sum of three disciplines whose individual coaching philosophies range far and wide. With triple the sports, comes triple the fun but also triple the training advice. If you’re anything like us, that’s a formula for seemingly endless confusion on best triathlon practices. But it doesn’t have to be that hard, just take it from mentor coach Otto Wafia.

“From just a group of two to three people you get so many ideas. You put them together and sorta blend them up and you get what you want.”

So here’s one recipe for success: Ask, listen, evaluate. Then blend. Repeat when necessary. 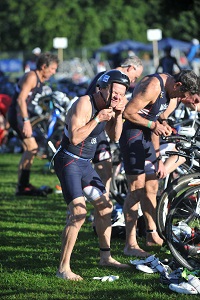 Don’t forget your transitions
“The transition is a very important part of triathlon. People work for months to shave a few seconds off the swim and then they just lose them, or even more,” said Zeljko Bijuk, who was in charge of instructing the youngsters on their transitions while in Portugal.

There’s no doubt about it, completing a triathlon requires endurance. To get the endurance, you have to do work. But going for a personal best might be as easy as working on your skills as opposed to another long run day. You’ve got two transitions in a triathlon, which means two opportunities to either blow past your competition or fall behind based completely on your ability to switch from one discipline to the next. So next time you don’t feel like a two-hour ride, just hop in the shower and practice taking off a soggy wetsuit a few times. Then pat yourself on the back for completing a solid practice.

Triathlon is a philosophy
Something special happens to you when you complete a triathlon. Sure, there are people who run marathons and others like going for a spin, but not many can combine three unique sports into one grueling race. But be warned, when you do it the first time, there’s no going back.

“Triathlon is a sport, but more it’s a way of life,” said Sergio Santos, who served as the overall head and run coach. “What you learn in triathlon changes your life for all the other situations. After triathlon you are different people with your families and different with your job. We are not only making better triathletes, we are making people better for life, for society.”