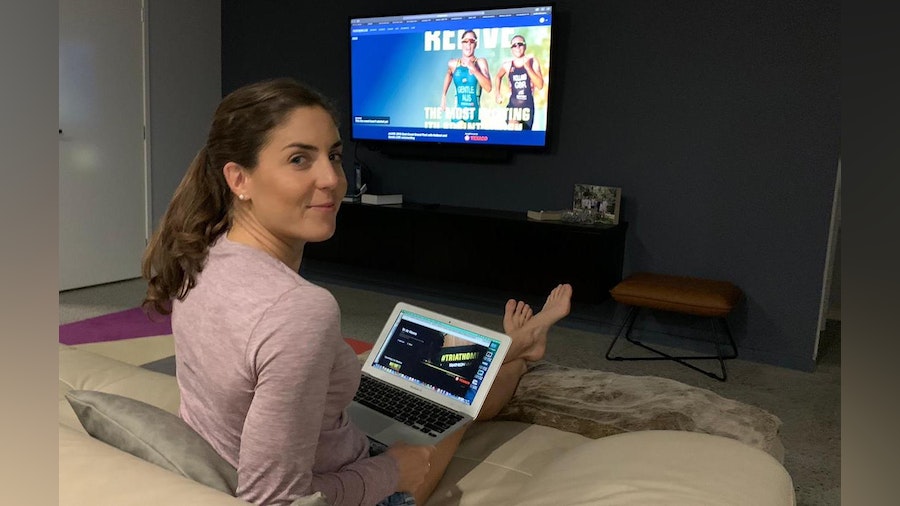 “Hello everyone, here we go! Is it weird that I’m a bit nervous?!”

Well, kind of, but Great Britain’s Vicky Holland was ready to take a trip down memory lane on Sunday as she and Ashleigh Gentle, aided and abetted by Jessica Learmonth and Emma Snowsill, gave their own brilliant take on the 2018 World Triathlon Grand Final Gold Coast on TriathlonLIVE.

The rollercoaster season reached its apex with Holland and Katie Zaferes knowing whoever finished ahead between the two of them would be going home as World Champion. For Gentle, a difficult season would finish on home turf with thousand of Australians roaring her on down the blue carpet. Here’s how they relived the race…

—
From the outset, it was clear there would be nothing predictable about what was going to unfold, the wind and chop adding to the pressure.

AG: It was so windy before race start! I remember feeling a bit cold, but happy I knew so many of my friends and family were there to cheer :) How were you Brit ladies feeling about the course, and the choppy swim ?
JL: Don’t think I saw the buoy until about 100meters before it. While bodysurfing Vix.
VH: I definitely inadvertently got in your way Jess! The chop was crazy - it felt so much worse than it looks now watching it back!

AG: Glad the coverage can pick you ladies out already, I’m somewhere in the middle of that whitewash ;)
VH: I remember focussing so hard on staying tucked in between Jess and Katie and not letting them go. I don’t think I had ever focussed so hard in a swim! I had a habit of messing up my swims in the 700-900m area that season and I was so determined to get it right on this day!

Out of T1 and onto the bike, Zaferes and Holland were both joined by a handful of teammates and strong bikers to push the pace.

VH: At this point I remember recognising we had a small break and a couple of girls wanted to really push, but my game plan was to man-mark Katie - I didn’t actually care too much if we got caught by the big group.
JL: I found the bike very strange from an outsider, with all the tactics. Tactics is probably not the right world, but basically the overall standings affecting the race more than usual.
VH: I nearly crashed on that corner - head down and I forgot there was a turn coming haha!

AG: Hold up ladies, I’m 23secs back and want to join you ;)
VH: Ashleigh being only 23 seconds down after lap one meant she was still very much in the game and a threat! You had some team tactics going on, didn’t you Ash?
AG: It was a big group at this stage!! I do remember trying to stay near the front and out of trouble.
VH: Biggest issue getting caught was that we were now a group of 30 on a technical course - things can get a bit sketchy in a group of that size! Now it became a case of staying safe and getting to T2 in a good position.

With a big group of athletes pouring in to T2 together, Holland knew that she needed a clean transition and to keep the momentum on her side.

VH: Best T2 I’ve ever done I think - exactly what I wanted to do.
AG: Damn girl, you went out fast! I’m trying to find my legs…

VH: DROPPED!!! As you can see, I yoyo-ed a bit before I popped off the back, but I simply knew I couldn’t sustain the pace with Ash and Katie! I remember thinking there was a long way to go, then thinking ‘ah second in the series wouldn’t be so bad’, and then thinking, ‘no! fight! just catch your breath and find your rhythm’!

Holland’s deficit never got overly stretched and she was soon able to haul back to the lead pair and had enough left to push on.

VH: The gap to Katie is starting to go and I remember going around you Ash, you looked back and told me we had a gap. I thought ‘great but I have to push hard, now! Not letting Katie back in”
AG: You look good Vicky, what were you thinking? I remember trying to go early while we were still on the GC highway but you reacted straight away, stuck to me like glue. I didn’t really know if I could sprint
VH: I think I knew I had ran HARD to get back into the race and my sprint probably wouldn’t be reliable! I wanted to drag it out longer and not make it an outright sprint over the last 200m

The noise down the blue carpet was deafening as Gentle took the tape and Holland celebrated her first World title.

VH: I was trying so hard to get to you Ash, but you wouldn’t be beaten - you were so classy!
AG: Congrats on your World Title Vicky!! I was so happy to see the blue carpet and I just sprinted for my life. The home crowd was incredible. The most memorable race of my career.

—
Watching the race together, but on opposite sides of the world, the pair gave a unique slant to the race… next up there is more reLIVE action to come with some fast and furious Mixed Relay high drama on 2-3 May on TriathlonLIVE!