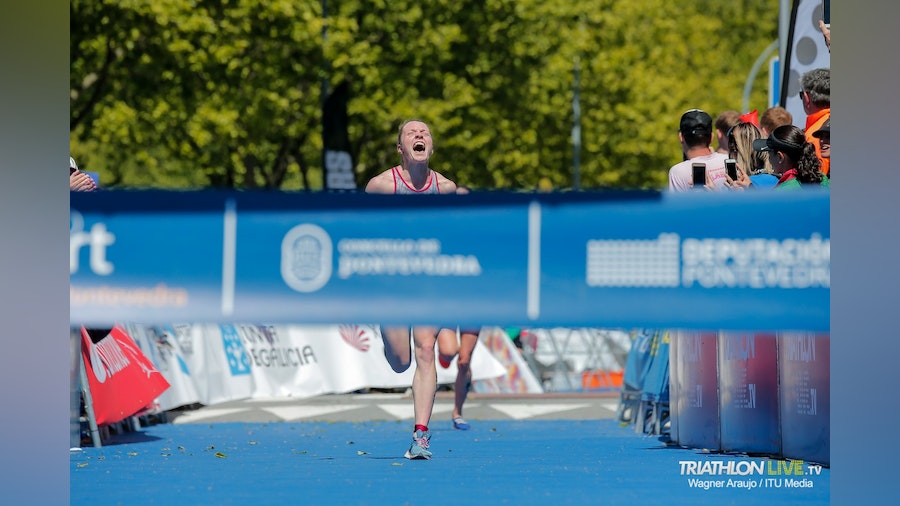 Stacked fields lined up in Pontevedra for the 2019 ITU Aquathlon World Championships across elite, U23 and junior races.

Headlining the elite men’s race was Emmanuel Lejeune, however the Belgian didn’t have a good start to the race and came out of the swim in 22nd position.

Kevin Tarek Vinuela from Spain, spurred on with home crowd support, produced a brilliant swim to lead the field into transition and out on the run.

Vinuela, who claimed 8th position earlier this week in the 2019 Pontevedra ITU Cross Triathlon World Championships, was running well in front but he had a string of strong runners motoring behind.

Rostislav Pevtsov, from Azerbaijan, pushed the pace and overtook the Spaniard on the final stage of the race. Pevtsov comfortably hit the blue carpet and took the tape to be awarded with the 2019 aquathlon title.

Vinuela produced a striking race combination to be presented with the silver medal in front of immense crowd support.

“Very happy with my race. I led through the swim, it was very very fast,” Vinuela said.

Russia’s Dmitry Polyanskiy, who recently competed in the 2019 MS Amlin World Triathlon Bermuda, rounded out the men’s podium with the bronze medal.

“I am not so happy with my swim today. It was difficult, my swim today. The Spanish guy was so strong here and I could not swim with him,” said the Russian triathlete.

In the women’s race Hungary’s Zsanett Bragmayer led the field out of the 1km swim and into the first transition of the day. Poland’s Alicja Ulatowska, Hungary’s Márta Kropkó and Bianca Seregni from Italy.

Bragmayer was the first woman to charge out of transition to commence the 5km run. The Hungarian set the pace and had Ulatowska, Kropkó hot on her heels.

On the final stretch of the course Bragmayer was running strong out in front but a slight look over the shoulder which was enough to edge Ulatowska to move swiftly and take the lead. The Hungarian held onto the confidence of her sprint, hit the blue carpet and stormed home to victory. The Polish athlete claimed the world title across both U23 and elite categories.

“I was all the time on the back of my friend from Hungary. I decided to go in her shadow, just to save my legs. In the final stage when I saw her turning her head around, I decided to sprint. I believe in my sprint and that was my tactic.

Bragmayer held strong in second position to run across the line and be awarded with the silver medal. A surprising burst of power enabled Mexico’s Itzel Arroyo Aquino to take the final spot on the podium in bronze.

Spain’s Esteban Basanta Fouz and Italy’s Bianca Seregni were awarded with the gold medals and world titles in the junior duathlon categories.