Early in the men’s race, pre-race favourites took control of the event when a small group of three athletes broke away on the swim led by Patraeus. Hamish Hammond (NZL), who made his debut in long distance racing in Wiehai was also a threat early on.

The trio carried their lead onto the bike. Although Denmark’s Allan S. Olesen and Esben Hovgaard clocked some of the fastest bike splits of the day, it wasn’t enough to overtake the original three. Despite 28-degree temperatures, the three pushed on and couldn’t be overcome. Petræus crossed over first, followed by Graham O’Grady (NZL) then teammate Hammond.

O’Grady said, “I ‘m happy with my race, for a return on the circuit I could not ask for more.  I had a small failure during running, which cost me the victory.”

In the women’s race, Bugdol quietly won the race without much contest. Although Dan Wang (CHN) challenged Bugdol on the swim, the Polish athlete took off on the bike and never looked back. With a bike split 12 minutes faster than the competition, Bugdol wrapped up her win while cycling.

While Wang maintained her second place position on the bike, South Africa’s Caroline Koll was too tough on the run, sailing past Wang for silver and leaving bronze for Wang.

“I am happy and I thank the organization for giving me the opportunity to run a race that I like a lot,” said Bugdol. “It’s a great first for me, I hope to return to Weihai in 2014.” 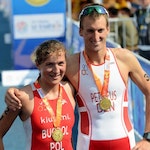 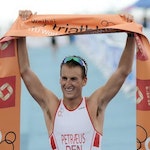 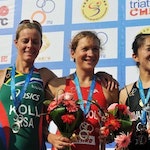