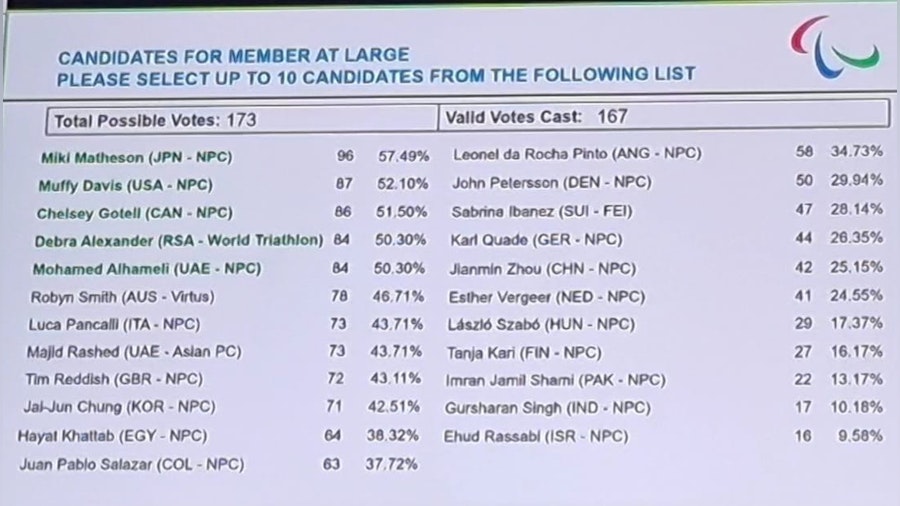 World Triathlon Vice President Debra Alexander (RSA) has been elected Member at Large of the International Paralympic Committee Governing Board. At the IPC General Assembly, held virtually this weekend, Dr Alexander was elected in the first round, with 84 votes out of 173 possible ones. This will be the second term for the World Triathlon First Vice President serving on the Governing Board of the IPC.

IPC President, Andrew Parson, has also been re-elected for an additional four-year term, receiving 98% of the valid votes at the General Assembly, while Duane Kale from New Zealand was re-elected IPC Vice President for a second successive term, with the support of 97% of the IPC membership vote.

Dr Alexander is the only Member representing an International Federation, and one of the five females elected as Members at Large.

“I want to express my gratitude to all the IPC members that have honoured me with their confidence and their vote, as well as to the entire team that helped me to get to this point. I promise to serve the Membership loyally and diligently and to be a strong voice for members on the IPC Governing Board. I remain committed to empowering Para Athletes from grassroots to the Paralympic Games and beyond sport and to supporting the delivery of World Class Para Sport events. Finally, I will continue to put athletes first, to ensure their health and safety and equity remain at the forefront of everything we do”, she said.

“We are extremely proud that Debbie Alexander has been re-elected, and that our sport will continue to have a presence at the top management level of the Paralympic movement”, said World Triathlon President and IOC member, Marisol Casado. “Debbie has been working tirelessly in the last years for the development of Para Triathlon and also to take the voice of the International Federations to the IPC, which has proven to be a great pathway for para sport to continue growing. I am convinced that being the great leader and team player that she is, she will continue to shine at the IPC during the next four years”, she explained.