If San Diego hinted at it, Yokohama has well and truly confirmed the USA’s Gwen Jorgensen as the leading contender in 2013, as she took back to back ITU World Triathlon Series titles and the overall series lead in Japan on Saturday.

Conditions played a huge part with constant rain and cooler temperatures making for a treacherous race at times, with numerous crashes on the bike. But it was Jorgensen who reigned supreme, first running down Emma Moffatt (AUS) and Jodie Stimpson (GBR) and then simply flying off into the distance to win by 14 seconds in a time of 1 hour 57 minutes and 5 seconds.

Jorgensen initially stayed back after the first lap of the run, but pulled out another negative split 10km to pull back in the difference in the final lap and said it played out to her race plan.

“I wouldn’t say it was a repeat of San Diego, there were different conditions out there today, a choppy swim and the rain on the bike, but it was an exciting race for sure,” Jorgensen said. “I just started the run and to be honest I was a little worried those girls really took it out fast and I just tried to focus on my race. I just tried to maintain pace the whole way.”

In overcast conditions with light rain at the start, Mariko Adachi (JPN) led out the swim, taking Moffatt (AUS) with her as they established a lead of 10 seconds out of the water. Moffatt immediately pushed the pace on the bike, dropping Adachi as Stimpson (GBR) closed quickly, aware of the danger Moffatt would pose should she break away solo.

That urgency soon dissipated however as the chase group caught and formed one group of 13 athletes, with all the favourites in attendance including Jorgensen (USA), Moffatt, Stimpson, Kate McIlroy (NZL), Maaike Caelers (NED) and former junior ITU world champion Kirsten Sweetland (CAN), who was racing her first WTS event in two years.

Caelers, who won bronze in Yokohama in 2012, didn’t have a great start to the bike as she took a tumble early on but the brave Dutchwoman quickly remounted though and joined the chase, 30 seconds down on the lead group.

Aside from that crash, not many other major moves happened across the next 25 km with the leaders keeping a gap of between 45 and 55 seconds from a chase group of seven being led by Great Britain’s Katie Hewison. But it all quickly changed in the final two laps, just as the chase managed to cut that to about 30 seconds, the rain started to pour and another crash splintered that pack, putting Caelers, Natalie Van Coevorden and Ai Ueda off the back.

But Hewison kept pushing the pace and on the second last lap of the bike leg, bridged to the lead group bringing a few others, including Caelers and Charlotte McShane, with her. It meant that T2 suddenly became busy, with 18 athletes hitting it together.

From there, Stimpson and Vendula Frintova went to the front and were quickly joined by Moffatt. While Frintova dropped, Stimpson and Moffatt kept pushing and for most of the run it looked the podium would be between them. However behind them Jorgensen, Ashleigh Gentle and Caelers started to move through the field.

Halfway through the run it then looked like it was San Diego on repeat, as Jorgensen closed the deficit to six seconds with 5km to run and within another 400m she joined the leaders and then went past them.

The win puts Jorgensen on top of the 2012 ITU World Triathlon series rankings, with three races now completed in the season. Germany’s Anne Haug still sits in second, with Moffatt in third.

Watch what the experts had to say after the race.
Moffatt was pleased with another podium in her wonderful career.

“We were lucky for the first 6 laps on the bike and then the rain came and you had to be very careful with white lines on almost every corner, so it was a relief to get off and go running without a crash on the bike.

“I was towards the back of the bike coming into transition, probably a bit over cautious there so yeah, a lot of things to work on hopefuly to improve my position but it is never easy when you are not first out of transition.”

Stimpson too was delighted with her form, in conditions that haven’t always favoured her.

“Gwen is a fantastic runner and it was more about when is she going it wasn’t if she was going to but when. When she came I tried to with her when she surged and I did go with her for a bit but she just kept on pushing and I couldn’t stay with her and then it was a battle between me and Emma. 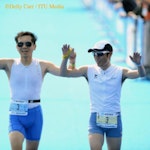 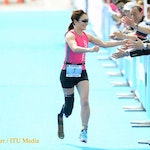 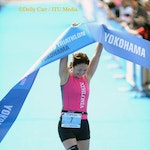 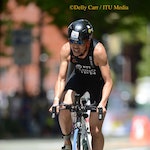 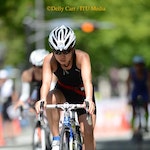 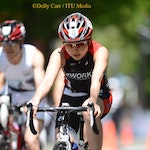 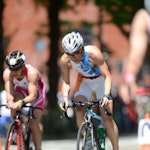 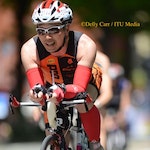 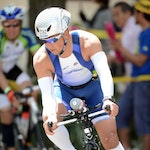 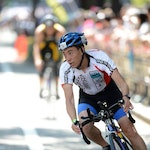 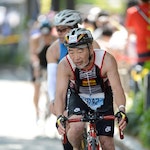 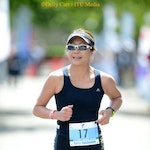