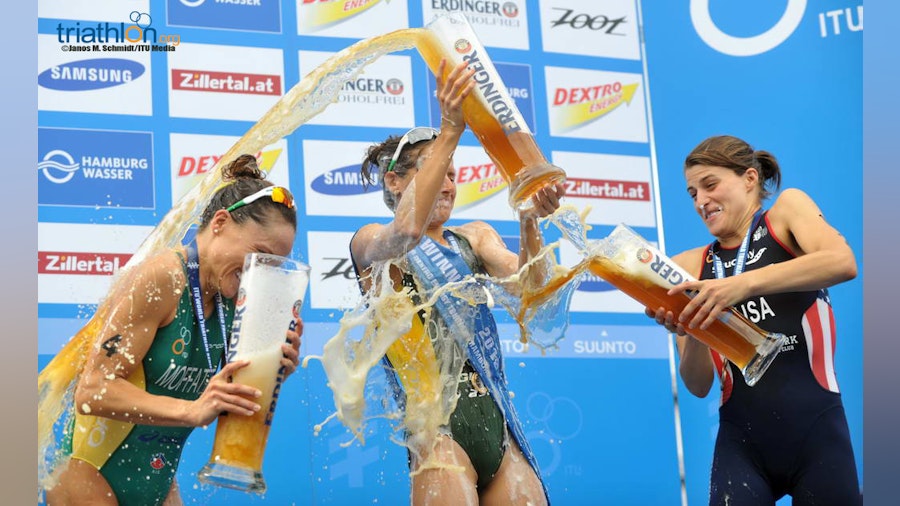 As the last race before the Olympics, Hamburg was reduced to a sprint distance. The shorter race resulted in accelerated speeds and fiery battles to the finish line, which in turn produced some beautiful shots.

Despite trailing 30 seconds behind on the swim, Erin Densham (AUS) collected her third ITU World Triathlon Series gold with a come from behind win. Athletes like Ashleigh Gentle (AUS), Anne Haug (GER) and Emma Jackson (AUS) got a head start on the run, but their lead wasn’t great enough to hold off powerful Densham. The Aussie sped to catch up to her teammates in the first two kilometers before pulling ahead for the win as the only woman to run under 16 minutes. Watch Densham’s win here.

The men wasted no time setting a blistering pace straight from the start. Javier Gomez (ESP) led out of the swim in just 8:32, but it was Courtney Atkinson (AUS), Clark Ellice (GBR), Dan Wilson (AUS) and Reinaldo Colucci (BRA) who enjoyed a 24-second lead out of T2. However, the advantage was short lived as Richard Murray (RSA) and Gomez quickly reeled them in. Murray and Gomez continued to blaze through the short 5km run, until the final lap when Murray cranked into overdrive and outsprinted Gomez to the finish. Watch Murray and Gomez go head to head here.

Vote on your favourite picture below.