After a drizzly race for the women, the rain stopped for the men’s race, giving way first to cool and cloudy conditions then warming considerably once the athletes were astride their bikes. But the weather conditions didn’t seem to faze Reinaldo Colucci (BRA) as he clutched his first World Cup title in three years. Colombia’s Carlos Javier Quinchara Forero won silver on home turf and France’s Etienne Diemunsch won bronze.

Marcus Vinicius Fernandes led at the first lap of the swim, ahead of Frederic Belaubre (FRA) and USA’s Gregory Billington, with Luciano Farias (ARG) and Colucci neck a neck in fourth place. Behind them, Tomasz Brembor (POL), David Mendoza (ARG) and Quinchará swam stroke for stroke in fifth.

Fernandes continued his lead out of the water, followed by Belaubre, Farias and Brembor, who were first away on their bikes.

Mexico’s Sergio Sarmiento showed much strength and promise in the first lap, ahead of Fernandes and Quinchará, as the riders swung through town. But the Colombian used tight cornering and, no doubt spurred on by the loud local support, powered past both riders to lead the peloton out of town.

Colucci used the second lap to steal the lead, with the Colombian in second place and Diemunsch in third. Quinchará once again showed his strength as the riders came into town, retaking the lead from the Brazilian but conceding it again as they accelerated onto the straight away to begin the third lap.

Quinchará regained the lead and maintained it into the transition, as the riders dismounted to begin the run ahead of Colucci and Diemunsch. A solid 40 seconds separated the first three runners at the first mid-lap run from the rest of the pack, which was being led by Dmitry Rostyagaev of Russia.

By the second lap, Colucci had stolen the lead and gradually increased his advantage over the Colombian, while Billington briefly held third place during the third run lap. But France’s Diemunsch put on a late surge and held third to take the bronze, while Colucci’s consistent pace kept him 10 seconds ahead of the Colombian at the finish line and secured him his second World Cup triathlon gold. 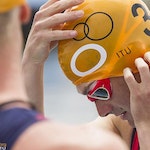 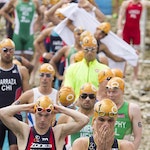 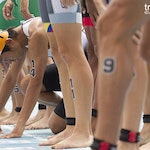 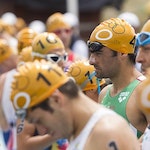 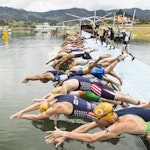 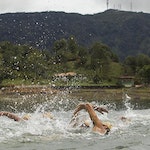 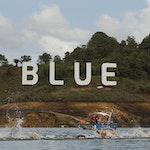 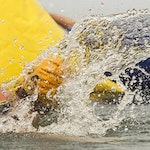 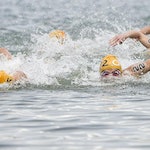 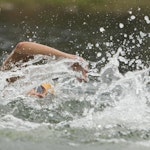 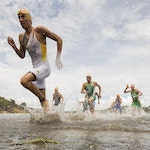