Raphael and Densham on Top in Brasschaat

Beijing Olympian Erin Densham from Australia and former Junior World Champion Aurelien Raphael from France took the victories at the ETU Triathlon Premium European Cup in Brasschaat on the weekend. Both winners demonstrated great performances in tough conditions and managed to win by large margins.

It was a hot Sunday in Brasschaat with the temperature over 30 degrees, which surprised most of the athletes who are used to moderate temperatures in Belgium. The heat was already boiling in the morning when more than 40 women dove into the lake at the local water sports centre. Carolina Routier from Spain pulled away straight from the start and managed to build a gap of about 30 seconds on the chase group, which included race favourites Radka Vodickova and Erin Densham. The Aussie and the Czech athlete were the driving forces in the lead group of 10 in the early stages of the bike, with another group including Charlotte Morel and Sarah Fladung following about one minute behind. The chasers worked hard and managed to close the gap lap by lap to the lead group, eventually catching them with two laps to go. A bunch of about 25 athletes arrived all together in T2.

Densham was the first one out on the run course, where the U-23 world champion of 2006 showed a great performance and built a gap of half-a-minute by the end of lap one. It was quite clear by then that the battle between the chasers would be for silver and bronze only, as the Aussie was just too strong on the day. Non Stanford from GBR went out hard and was running in second position until the very last lap where she was caught by Morel, who took silver for France. Stanford finished third, with ETU ranking leader Vodickova and Fladung from Germany finishing 4th and 5th, respectively.

The elite men made their start only a few minutes after the women’s finish. Raphael shared the lead with swimming powerhouse Richard Varga from Sloavkia at the swime exit. About 10 athletes, including Raphael, Vincent Luis, Josh Amberger and Dylan McNiece were the quickest out of transition and managed to break away in the early stages of the bike leg. The main group, including Mathias Zöll from Germany and local favourite Peter Croes followed about 30 seconds behind. The gap was constantly getting smaller due to the commitment of some Belgian athletes in the peloton, so it was no surprise that the chasers were able to catch the lead group with three laps to go. It was then Raphael who iniciated a counter attack with two laps to go, where only Jeremy Jurkiewicz from France and the two Belgians, Brems and Vanderhoogerstraete, could follow.

The small group arrived in T2 more than 90 seconds ahead of Croes and two minutes ahead of the chase group. The 2007 Junior World Champ went out hard straight away, not wanting any of the run specialists in the peloton to steal the victory from him. The Frenchman cruised home to take the win at the, with his teammate Etienne Diemunsch coming in second thanks to the best run split of the day. Mathias Zöll from Germany took bronze. 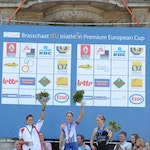 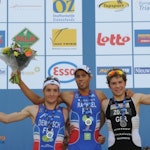 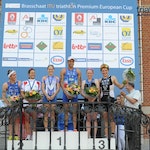 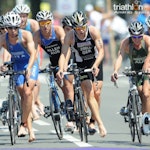 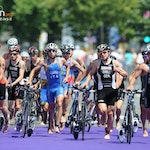 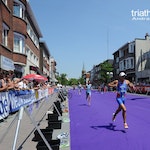 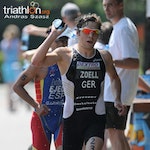 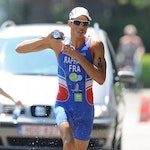 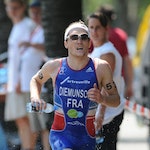 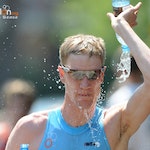 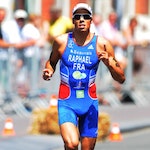 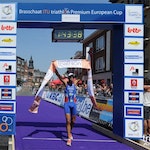