The rise and rise of Edmonton's Paula Findlay, racing at home

Her rise has already been described as meteoric, her season as perfect and her tag as one of most exciting Canadian athletes at the London 2012 Olympics – even though she is technically yet to qualify – is already assured. It’s been a whirlwind 12 months for the 22-year-old, but for Paula Findlay, her status as triathlon’s No.1 ranked female athlete this year is slowly starting to settle in.

“Findlay is the real deal heading to next year’s London Olympics and the betting is she’ll only get better.” Randy Starkman, Toronto Star’s Olympic reporter.

“They just call her Paula. You know you’ve made it when everybody calls you Paula. Everybody knows you,” Edmonton Triathlon Academy Kevin Clark said to the Edmonton Journal this week.

The amazing @PaulaFindlay does it again with an ITU victory in Austria. Dare we say #Worldsbestfemaleathlete Yes we dare. CTVOlympics twitter feed after her Kitzbühel win.

“We can’t say how many people will be there, but we’re anticipating the biggest attendance we’ve ever had because of Paula Findlay,” Brian Hetherington, spokesperson for the Edmonton organising committee.

“She loves to compete, she knows how to hurt and she knows how to race hard. That’s something that you can’t teach athletes. You can give them all the appropriate training, all the right ingredients leading into a race, but I always call that hard wiring that you’re born with. And I think she’s hard-wired to win.” Findlay’s coach, Patrick Kelly.

“Could you please slow down, just a little? Thanks.” Question posted by Liz Blatchford (GBR) on a Q&A with Findlay on the ITU Facebook page.

Findlay this week arrived home in Edmonton to race her first elite women’s race, in both the place where she grew up and where she raced her first triathlon in 2005. At the airport, she was greeted by her image on posters and a swarm of Canadian media, as the city eagerly anticipates Sunday’s ITU Edmonton World Cup. She admitted to the media like the Edmonton Sun, she did feel a bit different compared to when she flew home in 2010 after her first major race win.

“I think there was you and one or two others from the media,” she said. “And I was nervous, shy and frightened. I guess I’m a little more experienced at this now.”

“Also, that flight was from London and I was exhausted. This flight was from Victoria. And I was warned what was waiting for me. And now it’s fun for me. I know the importance to get myself in the media to do my part to help promote events and to inspire little kids. I was one of those little kids not very long ago.”

Findlay was born in Edmonton in 1989, to parents Sheila and Max, and her athletic career started in the pool before she added in a promising running career in high school. In between those, she sat in her front yard of the family’s house in Edmonton and watched the field cycle past at the 2001 ITU World Championships.

“Our house, at that time, was at the top of Groat Road, which is the bike turn-around. So it was right there, right in front of our house. I was watching the race from there,” she told media at the airport this week. “I thought it was really cool that Simon Whitfield, who had just won the gold medal at the Olympics in Sydney, was racing in my hometown and right in front of my house.”

But Findlay didn’t even think triathlon was for her until much later, her first junior competitive season was in 2006. It didn’t take long for her obvious talent to show through, she went on to win the Canadian women’s junior and elite titles in 2008. In 2009, she made her elite women’s debut in the first season of the Dextro Energy Triathlon ITU World Championship Series, finishing 15th in Hamburg and 16th in Kitzbuehel, before going on to win that bronze in the Under23 World Championships in Gold Coast, Australia. Afterwards, she revealed she had been battling stress fractures all season, which had reduced her training load.

But still, those steady results predicted a bright future. It’s just that no one thought it would happen that quickly. Simon Whitfield certainly didn’t see it coming.

“We knew Paula was going to be good, that she was going to win races; but I don’t know if anyone knew it would happen that quickly. She got to races in really good shape — but with no expectations. Fifth would have been great, tenth would have been great. And she goes off and wins those races! With no pressure, that was a perfect scenario to perform,” Whitfield told Impact Magazine after the opening Dextro Energy Triathlon Series race of 2011. It all started in London last year, where Findlay made her 2010 Dextro Energy Triathlon ITU World Championship series season debut. Wearing No.53, the rest of the field didn’t know what had hit them as she powered home for the win. She then followed it up in Kitzbühel, and was the only woman in the series to win two races in 2010. In the 2010 Budapest Grand Final, Findlay finished fifth as the Aussie Emma’s, Emma Snowsill and Emma Moffatt owned the day, Snowsill winning the race and Moffatt her second consecutive ITU world championship title.

In her first race of the 2011 season, a World Cup in Mooloolaba, Findlay finished fourth in a strong field. Therefore she started next week’s Sydney race as a contender, but not the favourite. But at the end of the day in Sydney, even with a lost contact lens, Findlay proved that her 2010 wins weren’t a fluke when she beat Barbara Riveros Diaz and Andrea Hewitt. But what has confirmed Findlay’s status as triathlon’s leading lady right now is that she did start to feel the pressure, it just didn’t force her to crack.

She posted on her blog after Madrid, “I still sat in the pre-race meeting thinking, “Cool, there’s Gomez! And Emma Snowsill! And the Brownlees!” I did have a minor panic attack when I opened my envelope and saw my “1” stickers and realised I had a bit of a target on my back, but in general I stayed pretty relaxed and was confident in the training that I had done since Sydney.” Even with that pressure Findlay went on to win Madrid and Kitzbühel, demonstrating in each race the skill that makes her so impressive - her kick. It was already evident in 2010, despite only racing in three out of the six Dextro Energy Triathlon Series events in 2010, she beat Hewitt and Moffatt for the best runner’s title of 2010. In each of the three races this year, she has been racing with others for almost all of the 10km run. It’s just that when it comes to the crunch, she has those last legs so important in a close finish. In Kitzbuhel, Findlay posted on her blog afterwards, she wanted badly to let Helen Jenkins run ahead, but talked herself into holding on. Findlay won and is now leading this year’s series by almost 500 points. And now, every story doesn’t just mention her as a chance to win this year’s World Championship - but as the favourite for the London Olympics. She hasn’t just been a hit in the Canadian media, journalists around the world are latching onto the potential. Whitfield thinks she’s the real deal, her coach Patrick Kelly said she’s a ‘once in a million athlete’ who is ‘hard-wired to win.’ Yet after every race win so far, she’s expressed excitement just to be there, and shock at winning. After all, it’s only taken her 12 months (her London win was July 24, 2010) to become the best female triathlete in the world right now.

Therefore, it’s a nice symmetry that Findlay can now return to Hawrelak Park as the No.1 ranked female athlete, the place where she started her career. Back in those races, people would line the streets to watch now legendary ITU athletes like Whitfield, Moffatt, Snowsill, Hamish Carter and Bevan Docherty. This time, more than 10,000 fans are expected to line the Edmonton streets to cheer for Findlay. And the best part is? This is only the start. 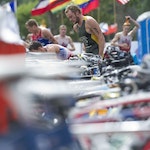 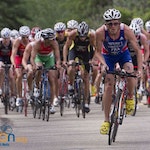 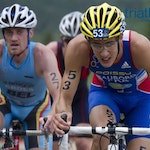 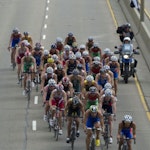 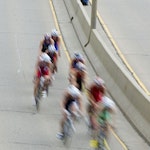 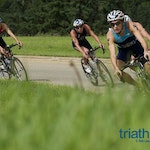 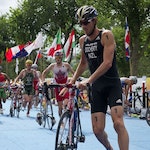 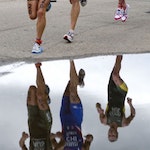 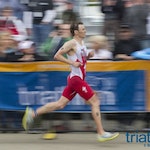 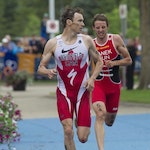 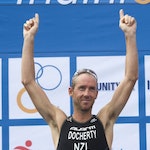 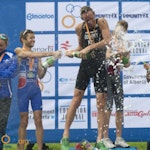