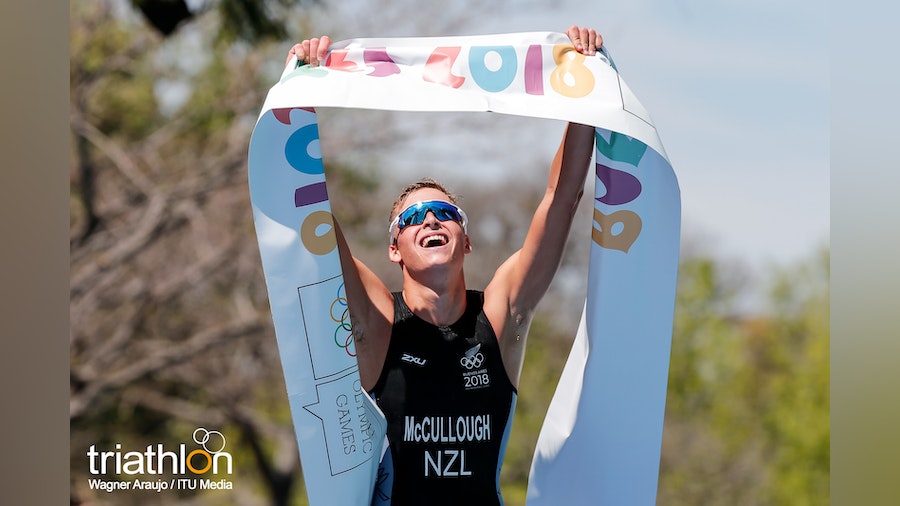 With a dominant performance from beginning to end, young Kiwi Dylan McCullough claimed victory in the 2018 Buenos Aires Youth Olympic Games, continuing New Zealand’s successful run in the Youth Olympics that has already seen gold for Aaron Barclay at Singapore 2010 and silver for Daniel Hoy at Nanjing 2014. Second over the finish line in the Green Park, Buenos Aires, was Portugal’s Alexandre Montez, while the bronze medal went to Alessio Crociani (ITA).

“Being the gold medallist here feels simply amazing”, said McCullough after the race. “I wanted to do well here but winning… I wasn’t sure about it. To get it done today is very special, I am really happy”, he explained.

McCullough, who had also delivered an impressive performance in the 2018 Junior World Championships a month ago on the Gold Coast, was one of the favourites for the race, and he duly delivered, leading the race from the first strokes of the swim. With the waters a touch warmer than for the Women’s race, and athletes not wearing wetsuits, it was the Kiwi who took control from the start, followed only by Alessio Crociani and American Andrew Shellenberger, who past the first buoys already a few metres ahead of the rest of the field.

By the end of the 750m swim, the gap had closed and there was a large pack entering the venue together, albeit with McCullough still leading.

He dragged the Italian with him to be the first ones out of T1, and the two pushed hard during the 20km bike ride to establish a sufficient distance behind them to tackle the last segment of the race knowing that it would be up to the rest of the field to try and catch them. With the Kiwi always leading and the Italian close behind, the difference increased by 20 seconds on each lap.

Behind the two leaders, a group of really strong bikers was led by Shellenberger, while Igor Bellido (ESP), Alexandre Montez (POR), Baptiste Passemard (FRA) and Andreas Carlsson (SWE) tried desperately to close the gap, but with a narrow course, and the two leaders pushing hard, the time difference simply kept increasing right up to the second transition.

When it all came down to the run, McCullough and Crociani had almost a minute over the chasers, and the Kiwi made it clear that he was going to be the man to beat today. He pushed one gear up to drop the Italian in the first kilometres of the run and never looked back until the finish line was in sight. All smiles, McCullough stopped the clock at 53 minutes and 27 seconds to claim the gold medal at the 2018 Buenos Aires Youth Olympics, the first major title of his career.

“I tried to keep calm in the run, never looking back, but obviously with such a big race as this one it’s quite hard, and I was quite nervous at the end. But I just knew that I had to stick to the plan and if I executed everything perfectly I could make it, so I did”, he said.

With an impressive run, Portugal’s Montez made his way passed his rivals one by one in the first lap to then force a final push that allowed him to chase down the Italian and cross the finish line in second place, with an impressive run split of 15 minutes and 33 seconds. The third place went to an exhausted Crociani, who managed to hold onto the bronze medal by finishing just 8 seconds ahead of Andreas Carlsson.

Baptiste Passemard, Igor Bellido and Shellenberger completed the top 8 finishers, an outstanding race for the Europeans, claiming six out of the top 8 places.