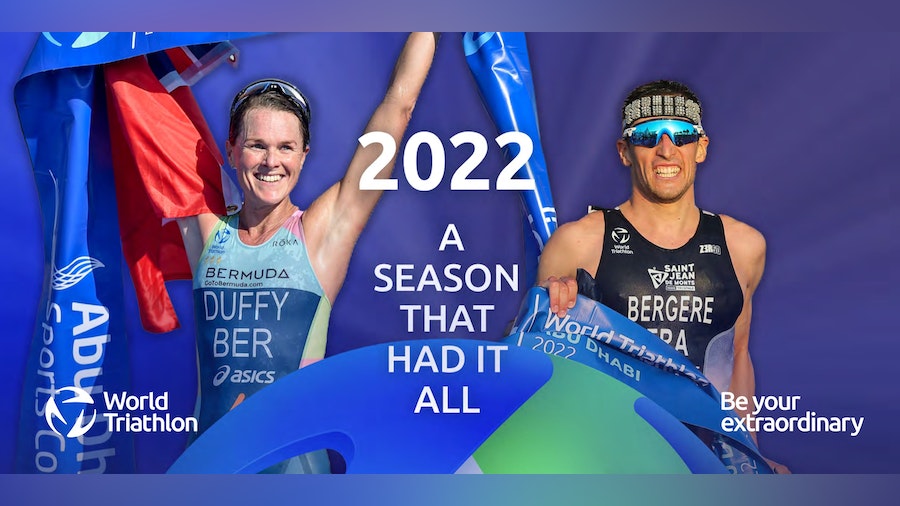 World Triathlon President and IOC Member Marisol Casado reflects on 2022, a season that had it all.
As we reach the end of a truly unique season for so many reasons, it is my great pleasure to introduce the World Triathlon Yearbook for 2022 and reflect on another memorable year in our sport.

Triathlon has emerged as strong as ever from the unprecedented upheaval that the world has faced over the past few years, diving headfirst into the excitement of a new Olympic Qualification period to Paris 2024. The dreams of athletes and teams of appearing on the biggest sporting stage of them all are once again ignited and World Triathlon has continued to do everything it can to help those dreams come closer to reality

Two outstanding World Champions were crowned in Abu Dhabi, with Flora Duffy making yet more history with a record fourth women’s title and Leo Bergere securing his first-ever Series gold at just the right moment to win the men’s title. I am delighted for them both, but want to recognise Georgia Taylor-Brown, Hayden Wilde and Alex Yee for the enormous parts they played in ensuring the battles for the sport’s biggest prizes this year went down to the wire and providing such incredible and inspiring entertainment to fans all over the world. As well as our champions, I know that those who fell just short of the titles will return in 2023 with renewed determination. The 2022 WTCS season began with two fantastic events last year in Hamburg and Abu Dhabi and continued with seven more races this year in Yokohama, Leeds, Montreal, Hamburg, Cagliari, Bermuda and the Championship Finals back in Abu Dhabi in late November, each venue bringing its own unique character to the Series.

The new Olympic cycle has also seen dozens of breakthrough talents appear on the WTCS podiums for the first time, staking their early claims on those precious 55 Paris 2024 men’s and women’s start places. These are athletes who have all cut their teeth on the World Triathlon Cup circuit, too, of which we saw nine superb events including Arzachena, Huatulco, Valencia, Karlovy Vary, Tongyeong and Miyazaki and brand new circuits unveiled as Bergen held Norway’s first World Cup, Pontevedra gave us a preview of the 2023 Championship Finals venue and Vina Del Mar hosted Chile’s first ever race at the level.

This year we welcomed WTPS Swansea to the Para Series calendar alongside Montreal and Yokohama and held four Para Cups in equally stunning locations. The Para season also ended in November when our twelve World Champions across six categories were crowned in Abu Dhabi, and the first-ever Para Mixed Relay event was held, the success of which gives us great hope for its inclusion in the programme for future Paralympic Games.

As well as the most prestigious medals and titles in the sport, we have been able to offer more prize money than ever before in 2022, with a total purse of USD3.4 million across the year, and the bonus prize pool hitting USD1 million for the first time, underlining our commitment to the athletes who dedicate themselves to their craft.

Throughout the year we have remained in constant dialogue with our NFs and Continental Confederations too, with Open Hours workshops on a range of subjects and our first in-person Congress since Lausanne 2019 took place in Abu Dhabi. It has been immensely satisfying to see the continued growth and innovation across all areas of the sport and across all five continents, and I hope that you enjoy this in-depth look back across a remarkable year.