Athletes back Team Triathlon for Olympics after record breaking 2011 titles 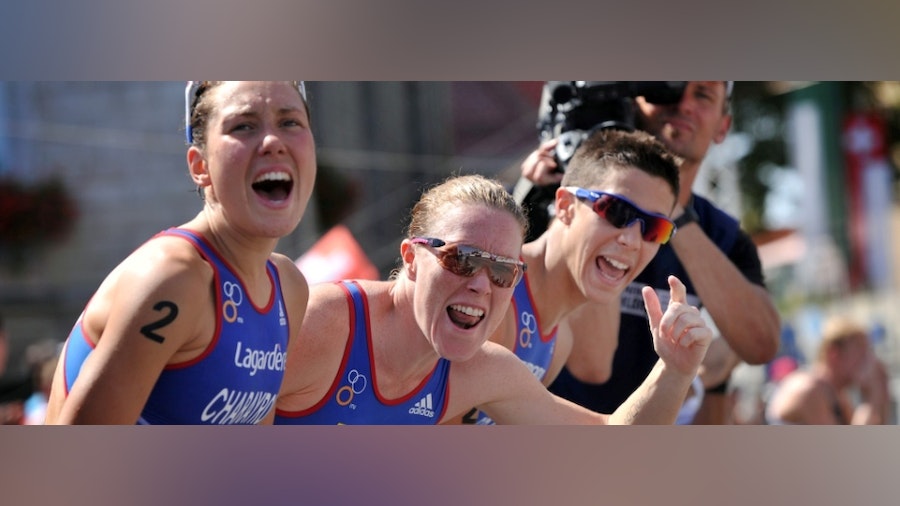 The 2011 ITU Team Triathlon World Championships in Lausanne were the most successful yet and according to the athletes that raced them, the fast and furious relay should be an Olympic sport.

In this format of woman-man-woman-man, that started with a 500m swim for the first athlete due to safety reasons, but then followed up with a 265m swim, 5km ride and 1.5km run, each athlete had to complete their races before tagging the next. It was all over in just one hour, nine minutes and 29 seconds as the British dream team of Jodie Stimpson, Jonathan Brownlee, Helen Jenkins and Alistair Brownlee won Great Britain’s first title, knocking Switzerland off the podium for the first time. It was easy to tell from watching, or looking at the pictures afterwards, that emotion was sky high as each athlete cheered on their teammates from the sidelines. Jonathan Brownlee, who played a race defining role when he went with Ruedi Wild on the bike along with Maik Petzold and Vincent Luis in the second leg, said he would love to see the format at the Olympic Games.

All a twitter on Team Triathlon: The best athlete Tweets
Wow that was hard but very exciting! Well done my team mates @jonny_brownlee
Just finished watching the Team Triathlon Championships on Triathlon.tv. much more exciting to watch than any other format @mattchrabot
If that isnt worthy of being in the OLYMPICS, I’ll eat my hat! how passionate did that look, men & women racing together 4 there country.POW @KrisGemmell_
had fun today thanks to the dream team on the same team as 3xworld champions was pretty awesome @jodiestimpson

“It’s real attractive racing, from the start the lead kept changing and I loved it, I was nervous watching it,” he said. “It should be in the Olympics I think, I’ve watched Olympics all my life and I haven’t seen anything like this, it’s something different, it’s fast it’s furious and there is lots so many elements with the swim, bike and run, and then teamwork as well, so yeah it should be there because it’s just so exciting, and it’s something different.”

Anja Dittmer also played a crucial role for bronze medallists Germany, when she sprinted through the pack at the end of the run to give Petzold a few seconds head start on the rest of the field in the first changeover. She’s also well qualified to talk about the Olympics, having competed in Sydney, Athens and Beijing. And after claiming a bronze medal in London last month, she met Germany’s criteria for London 2012, which means she is the first triathlete to qualify for four consecutive Games. Dittmer also threw her support behind the format.

“Of course, I would love to compete in the mixed team at the Olympics, I think it’s really exciting and really for the spectators and also for the teams and the nation and all the athletes,” Dittmer said. “It makes you stronger as a team and its more fun as a team. Of course, you don’t want to disappoint the team, but I think its a good feeling because you know you aren’t just doing it for yourself you have to push for the other athletes and I think it’s a good thing, it’s just makes you better probably.”

The ITU is bidding to have team triathlon included on the Olympic programme for the Rio 2016 Olympic Games. The format made its major games debut at the Singapore 2010 Youth Olympic Games, where continental teams were formed from athletes that competed in the individual races. Europe won the gold medal there with a team of young and up coming stars, like Alois Knabl (AUT), Eszter Dudas (HUN), Miguel Fernandes (POR) and Fanny Beisaron (ISR). Team Triathlon has also been accepted onto the programme for the Incheon 2014 Asian Games. This year’s edition in Lausanne was only the third edition of mixed relay format, which was revamped in 2009, not just in the name of excitement, but to help meet triathlon’s high equality standards. The ITU has had equal prize money for men’s and women’s races right from the first World Cup event in 1991. Therefore, a world championship that puts men and women on equal footing sums up the ITU’s equality message perfectly.  Previously installments featured separate women’s and men’s team world championships.