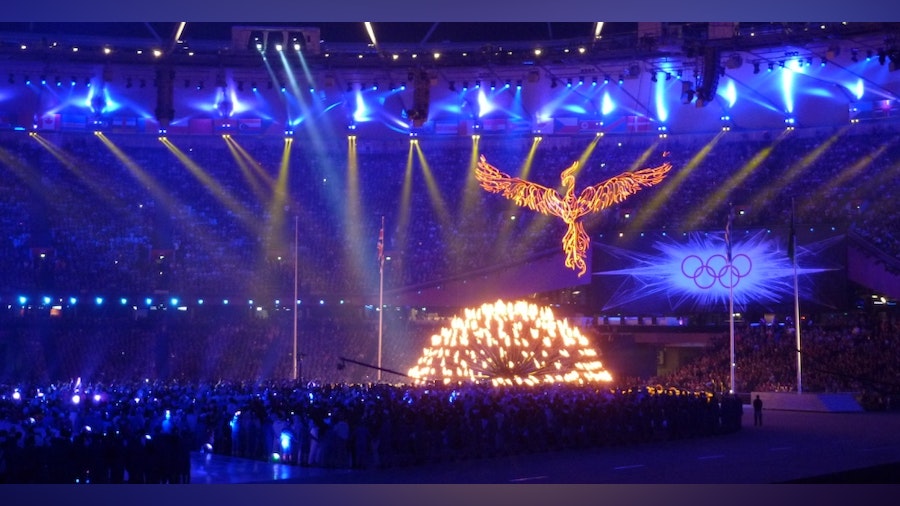 The London 2012 Olympic Games officially came to a close on Sunday night with a highly entertaining closing ceremony, a fitting end to a successful Olympic Games. Triathlon was represented by a number of athletes highlighted by gold medallist Nicola Spirig who had the honour of carrying the Swiss flag into Olympic stadium.

Kim Gavin, Artistic Director of the Olympic Closing Ceremony, brought together Britain’s biggest international stars and emerging talent to perform in an event that celebrated the achievements of the world’s greatest athletes during the London 2012 Olympic Games.

The Ceremony at the London 2012 Olympic Stadium paid tribute to UK music, fashion and culture.

Singers Jessie J, Taio Cruz and Tinie Tempah emerged from three limousines to sing their numbers. The Spice Girls entered the Stadium in five black cabs for renditions of ‘Spice Up Your Life’ and ‘Wannabe’, and Russell Brand performed ‘Pure Imagination’ and ‘I Am the Walrus’ atop a psychedelic bus.

Eric Idle led a singalong of ‘Always Look on the Bright Side of Life’, from the film Monty Python’s ‘Life of Brian’, the Kaiser Chiefs covered The Who’s ‘Pinball Wizard’ and The Who led a triumphant rendition of ‘My Generation’ to close the show.

Eric Idle said: ‘I’m delighted to be an Olympian, and proud to have been chosen to represent my country at Show Business. I’m hoping for a brass medal.’

Lord Sebastian Coe, Chair, London Organising Committee of the Olympic and Paralympic Games (LOCOG), said: ‘Kim Gavin has delivered a fitting celebration of the athletes, the volunteers, this City and the whole country, who have helped us stage a great Olympic Games.

‘We have shown the best of us throughout these Games and provided the platform for the world’s greatest athletes to shine. I would like to pay tribute to the volunteers, the performers and the country for making Games so memorable for the athletes and sports fans of the world.’

Artistic Director Kim Gavin said: ‘I was lucky because Seb Coe basically just asked me to put on a party, a celebration of London and the UK. To me the sport was always the main event, and I wanted to create a great after show party for the athletes, the volunteers, the spectators and people watching around the world. My approach, just like any party, was to start with the music. We wanted the Ceremony to reflect on UK music and how good and global British music is.’

A volunteer cast of 3,500 rehearsed on average for 60 hours each in a total of 135 rehearsals during evenings and weekends at two east London rehearsal sites. Some 350 child volunteers were drawn from 10 schools in the six east London Host Boroughs.

With files from LOCOG