Borghild Løvset held off the challenge of defending champion Helena Erbenova to secure her second European Winter Triathlon Championship title in Tartu. The Norwegian finished in 1:40:34 to pip Erbenova to the gold medal and avenge last year’s surprise loss to the Czech athlete in Valsesia.

On a difficult course, Løvset and Erbenova duelled constantly at the front of the pack before the Norwegian gained control on the third bike lap and from there she never looked like surrendering her lead. There was double joy for Norway as former U23 European Champion Elisabeth Sveum claimed the third podium position.

In the Women’s U23 race, Tatiana Bregeda claimed another title for Russia with a convincing victory. She finished ahead of compatriot Margarita Ovsyannikova with Italy’s Illaria Titone completing the podium.

Pavel Andreev retained the European Championship title in Tartu with a dynamic victory in a race dominated by the Russian athletes. The reigning World Champion, and 2011 European Champion, led home a Russian 1-2-3 to begin 2013 in the perfect fashion.

Andreev finished in 1:28:31 ahead of countrymen Maxim Kuzmin and Dmitiry Bregeda, who secured 2nd and 3rd places respectively. Such was the Russian dominance in Tartu that Evgeny Kirillov finished 4th with the evergreen Daniel Antonioli of Italy finally bucking the trend in 5th place.

Andreev said: “I finished the running course as third, on bike course I managed to come to second place and skiing took me finally to the first position. The track was great and I really enjoyed competing here.”

The highest ranked Estonian was Allan Oras who finished 20th in a time of 1:41:24. This might have been better had he not fallen off his bike but the Estonian was simply delighted to compete at this level, saying: “It was fun to compete here.”

In the Men’s U23 race, Russian dominance continued with victory for Viktor Kuznetsov. In a field largely made up of Russian athletes, Kuznetsov once again led home a 1-2-3 with podium places for Pavel Yakimov (2nd) and Dmitry Koltsov (3rd). Koltsov just did enough to hold off the threat of Estonian Sander Linnus, who finished 4th.

Juniors Review:
Roman Vasin and Stefania Shamshurina made it a double success for Russia’s junior athletes by claiming victory in Tartu.

In the Junior Women’s race, Shamshurina (pictured above) powered away on the bike after a tight opening run segment. Speaking after the race a delighted Shamshurina said: “For me, it was the perfect international championship. The track was perfect.”

Shamshurina’s dominace meant she finished almost three minutes ahead of Natalie Grabmullerova, who had to settle for second place.Kseniia Belkina of Russia completed the podium in third.

In the Junior Men’s race, Roman Vasin had a much closer battle with the field, crossing the line just ten seconds ahead of his nearest challenger. Once again it was Vasin’s power on the bike which propelled him into a winning position, despite the best efforts of runner up Zhorzh Basyuk.

Basyuk, from Russia, posted the fastest ski time of the day and although he closed the gap considerably on Vasin it wasn’t enough for victory. In another Russian 1-2-3, Nikita Mandrik completed the Junior Men’s podium in third place. 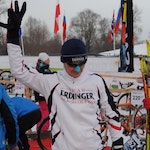 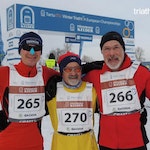 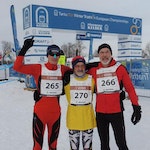 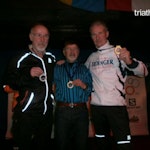