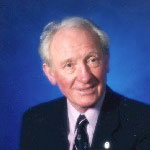 The son of coal miners, McDonald was born in Felling on Tyne near Newcastle in Britain. He too, worked in the pits after leaving school at 14. Like any young Geordie boy, soccer was a way of life, supporting Jackie Milburn and the beloved Magpies. As a young man, he became interested in mountain climbing, tackling major routes in the Alps and many first ascents in North America.

While a member of the Dunsdale Climbing and Skiing Club, he went on a ski trip to Austria that ended with a broken leg—a lucky break as it turned out. A French woman he’d met there sent a postcard suggesting he visit her daughter going to university in Yorkshire. McDonald, in the midst of his national service in the army, happened to be at an army camp two miles away. He called on her, inviting her climbing and skiing. Monique later became his wife.

They settled in Vancouver in 1954 where McDonald found work as an electrician. As a member of the Grouse Mountain Ski Club he helped organize many of the mountain’s earliest alpine events and coached the BC ski team including one Nancy Greene. Later, he was part of the group that founded Whistler, building its first ski lift, helping construct the first power line in from Squamish, even serving on the unsuccessful Vancouver-Garibaldi Olympic bid in the mid-1960s. The network of cross-country ski trails in the village are his work also, one trail’s jump bearing the name “Les’s Leap.”

McDonald began competing in marathons in the 1970s and to spice up training, he and some friends discovered triathlon, tried one in California, and brought the sport back to Vancouver. In 1981, the first triathlon ever held in Canada took place at UBC, swimming in the ocean, biking around Stanley Park and running on the Seawall. The successful race was remarkably informal; McDonald only realized an event permit was needed when an RCMP officer knocked on his door later that night.

The next decade McDonald worked tirelessly building the sport’s governing bodies from the ground up. In 1983, he led a committee that established the British Columbia Triathlon Association. A year later, he founded the Canadian Triathlon Federation (later Triathlon Canada), serving as its first president until 1996. All the while, McDonald was still competing, finishing as age group champion in many races and even moving up to the Ironman distance, where for five straight years beginning in 1983 he won the overfifty world championship setting world records in the process.

Then a phone call in the fall of 1988 changed the direction of his life—and the sport’s—forever. On the line was IOC President Juan Antonio Samaranch, who wanted McDonald’s help in bringing triathlon to the Olympic programme. McDonald co-chaired a “working group” to establish the sport’s international federation and in 1989 the International Triathlon Union (ITU) was formed with McDonald as its first president, a position he still occupies today.

The ITU’s location became the stuff of legend: 1154 West 24th Street, North Vancouver—McDonald’s home address. Money and resources were scarce running an international sports organization out of one’s own home. “The kids had all moved out,” McDonald chuckles today. “We had room.”

In 1994, the hard work and sacrifice paid off with IOC confirmation that triathlon would be included on the Olympic programme as a full-fledged medal sport for the first time at the 2000 Sydney Olympics.

Under his leadership, triathlon’s popularity has continued to grow upon the foundation laid by founding father Les McDonald, a man who knew that if one could not move mountains, by climbing them, great heights could be reached.

Written and researched by Jason Beck, Curator of the BC Sports Hall of Fame.

World Triathlon Sprint & Relay Championships will take place in Hamburg from 13 to 16 July 2023. The event includes… twitter.com/i/web/status/1…
1 hour ago