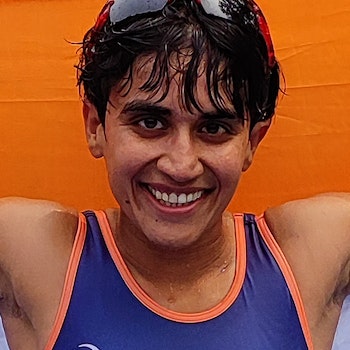 Pragnya Mohan is an Indian professional triathlete based out of Ahmedabad, Gujarat. Being a competitive swimmer since a young age, she was multiple times state champion. Taking up long distance running in middle school and cycling in her high school years, she won her first triathlon National Championship in 2014 and also in the same year won her first international medal, a silver medal at the South Asian Championship at Pokhara, Nepal.

After completing her Chartered Accountancy (CA) course in 2017, she plunged into triathlon training full time. She spends half a year training in Spain and Australia. She became the South Asian Champion in 2019 and became first triathlete to represent India at the Triathlon World Cup at Madrid, Spain in 2019. Later that year, she again clinched the national champion title. In 2022, she defended her South Asian Champion title.