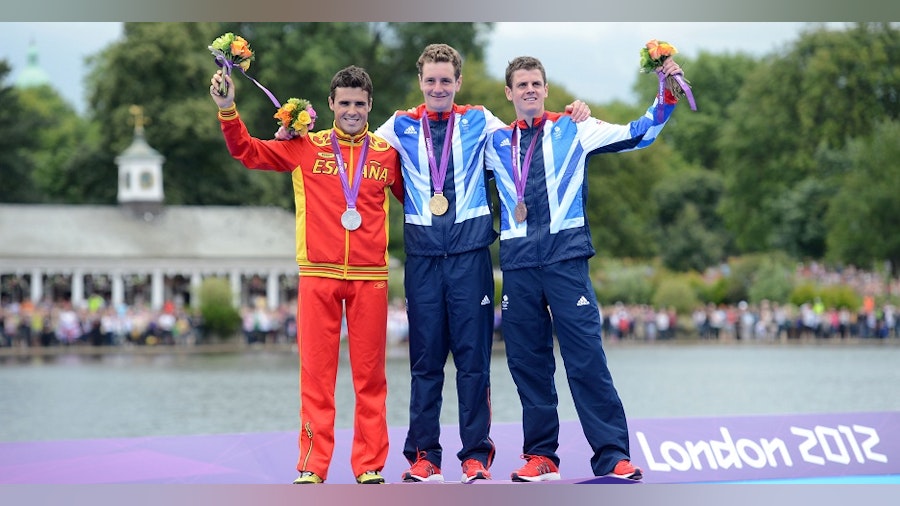 It’s impossible to talk about highlights from the 2012 triathlon season without talking about the biggest event of the year – the Olympics. It was, without a doubt, the central focus of the year with two of the most mind-boggling races we have ever seen.

According to Olympic triathlon history, pre-race favourites have struggled to perform on the Olympic stage. This year’s race saw a monumental shift from this paradigm when several of the pre-race heavyweights made the podium. A small pack broke away on the swim, but it did not foreshadow the would-be winners, as a lead group of 22 women entered the second transition together. Fueled by Olympic dreams, 10 competitors pumped out a furious pace to separate themselves from the field.

By the second lap, the group whittled down to just five – Norden, Spirig, Hewitt, Jenkins and Erin Densham (AUS). While the crew first dropped Hewitt followed by Jenkins on the third lap, Groff worked her way back up to the leaders.

Though Densham controlled the pace from the helm, it was Spirig who went sprinting past her on the final straight away. Norden responded to the challenge, and the pair gutted out a photo finish for first and second, with Spirig taking the gold. Behind them, Densham stayed ahead of Groff for third.

Men’s Race:
The men’s competition also featured a deep field of contenders with all-star Russian, German and British teams, in addition to tough Olympic veterans like Simon Whitfield (CAN) and Javier Gomez (ESP). However, with the Brownlee brothers and Gomez in the lineup, the men’s podium appeared more predictable. Under grey skies and wet conditions, the men’s race got underway with sensational swimmer Richard Varga (SVK) setting a ferocious pace in the Serpentine Lake. Both Brownlee brothers followed, as did Gomez and Alessandro Fabian (ITA).

The small group of five flew off for the bike course, but it wasn’t long before a strong field of 15 men caught up. Joao Silva (POR) ran out of Transition 2 first, trailed hotly by Alistair, Jonny and Gomez. The trio then pounded out an unimaginable pace, clearly announcing themselves as the eventual medallists.

Alistair made his move on the third lap, dropping his brother and forging ahead of Gomez. The Spaniard also quickened his stride, leaving Jonny behind. But Alistair’s blistering speed was too much to chase down. The Brit earned Team GB its first ever triathlon gold with a smoking 29:07 run split. Gomez took silver, while Jonny brought it home for bronze despite having a 15-second penalty.