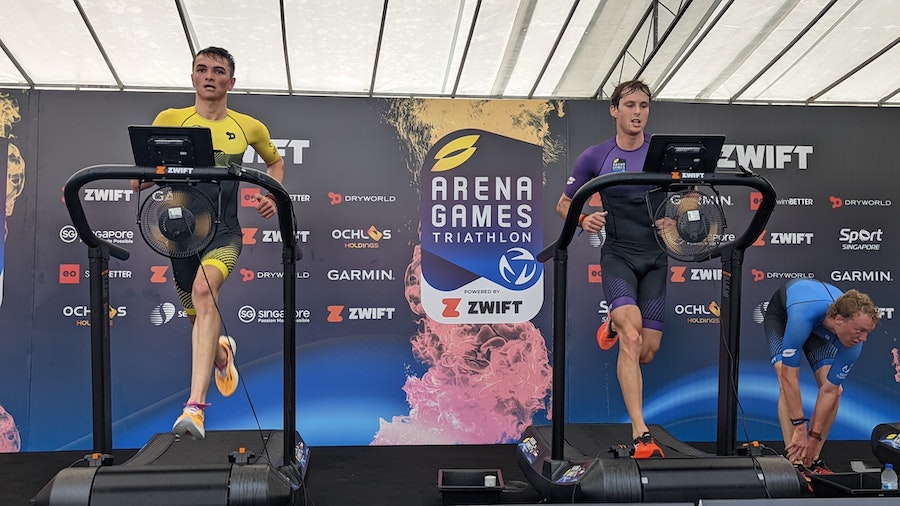 Two women’s heats and three men’s heats, each featuring two race stages, opened the racing in Marina Bay in Singapore, all part of the Arena Games Triathlon Series. For the athletes, it was the first taste of racing Arena Games Triathlon outdoors, in the searing heat of Singapore and they learned valuable lessons ahead of the final, which has the World Championship titles on the line.

Women’s Heats
Sian Rainsley (GBR) produced a stunning display to be the fastest qualifier for the finals of Arena Games Triathlon Singapore powered by Zwift. The British triathlete was in total control in Heat 2 with her time of 28:33 the quickest in the women’s field on the day. Great Britain’s Beth Potter also made it through from Heat 2. Potter finished almost a minute behind Rainsley, but was still comfortable with a 42-second advantage over third-place Anabel Knoll of Germany.

The first heat went with form and was dominated by Jess Learmonth and Georgia Taylor-Brown. The gold medal-winning duo, representing Great Britain, had the chance to ease up in Stage 2 and conserve energy. Learmonth’s time of 28:36 was easily enough to win with Taylor-Brown 17 seconds back.

All the remaining athletes go into tomorrow morning’s repechage with six qualifying for the final later in the day.

“It was really hard but I was able to ease up towards the end which was nice because it was so hot. It was job done and get ready for tomorrow,” said Learmonth.

“The aim was to do the bare minimum to get through. I didn’t feel like I was trying hard but it was so hot. I went a bit harder for the first race and then it was more comfortable with your own space for the second one. We did what we needed to do and now we can chill out until 4pm tomorrow,” added Taylor-Brown.

Rainsley was understandably delighted with her performance and to be part of the four-strong British contingent to qualify automatically for the finals.

“I think it’s quite obvious who the three main contenders are: Georgia Taylor-Brown, Beth Potter and Jess Learmonth. I train with those girls so I know what shape they are in as well. It’s amazing to be part of such a strong British team,” said Rainsley.

Raphael had the fastest time in the men’s heats with a 25:25 in which he again underlined his swimming prowess, this time in the open water of Marina Bay Reservoir. Yee showed his frustration as he was given a time penalty for having his towel out of his box, but composed himself to cruise through in 25:42.

Heat 1 saw a storming performance from Japan’s Kenji Nener who went hard throughout as Belgian’s Marten Van Riel came home in second to ensure he also qualified automatically for the final.

New Zealand’s Hayden Wilde made his Arena Games Triathlon debut in Heat 2 and showed he has what it takes to shake up the established order. While he is unlikely to win the title, his presence could have a big impact on who does.

Wilde blasted through his heat, clocking a time of 25:35, the second-fastest men’s time of the day, while Justus Nieschlag, who heads the points table alongside Raphael after his win in London, also made it directly through to tomorrow’s final.

The athletes placed 3-7 and the five fastest losers have made it through to the two repechages tomorrow morning. The top two in each qualify for the final in the afternoon.

“It was absolutely awesome. I think we are the first people in the freshwater here and I had to get a gap on the first stage and played it easy in the second stage on the water and played my cards right and took it easy for the last 400m of the run,” said Wilde.

“I love the heat and guys like Kenji and Marten will make it very intense so I look forward to that.”

The Finals will take place in Singapore on Saturday 7th May from 4pm (local time). Review the full start lists here.