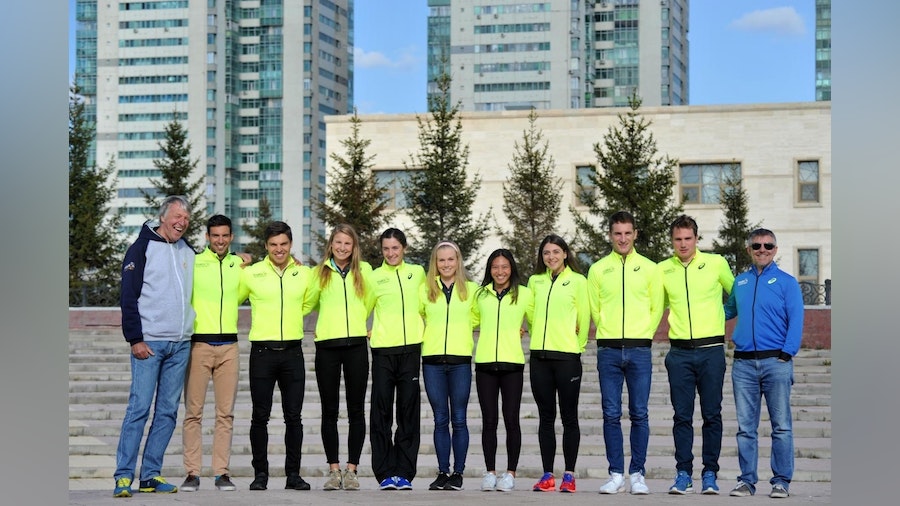 The 2018 ITU Astana World Cup became the first outing for the new-look ASICS World Triathlon Team, with nine of the team’s athletes competing in the first World Cup race in which points were available for Olympic qualification. Signed in January and part of the ITU Strategic Plan 2018-2021, the partnership with the global sports brand provides precious support to the ITU Development programme as it seeks to further extend the opportunities it offers to developing triathlon nations, their athletes and coaches.

Rolf Ebeling and Mick Delamotte led the team in Astana, the first of five World Cups earmarked for the athletes, and one which included a first World Cup outing for Philippines’ Marion Kim Mangrobang.

“Each one of these races, while they are valuable in terms of earning points for Olympic selection, is a development opportunity for these guys. They’ll be able to come away from here with some new skills and new experiences that they can take home to their own training environment and become better athletes as a result,” said Mick Delamotte ahead of the athlete’s briefing in Astana.

“The programme itself has developed and morphed over the years but we’ve had some wonderful athletes have come through, from Flora Duffy to Lisa Norden and Barbara Riveros. There has been more than a dozen of our athletes at each of the Olympic Games since the programme began and I think that is testament to the quality of the programme itself that its providing those opportunities.”

For Rolf Ebeling, the agreement with ASICS and subsequent renaming of Team ITU is another important step on the road to elevating performances from countries with less of a tradition in the sport to compete on the biggest stages with the best athletes in the world.

“The ASICS World Triathlon Team is a perfect step for the development team and for ITU. For our programme to have a partner of that stature is important, and from the provision of equipment to the profile of the brand, it’s a perfect fit. We have quality athletes and they are proud to be associated with ASICS. Now, one of the new elements we will be bringing in is having the coaches, those from the athletes’ own countries, come and take part in the programme in the future too.”

For Estonia’s Kaidi Kivioja, the support she has received through being a part of the development team since 2012 is something that she could never have expected due to a lack of funding for the sport at home, where triathlon is pushing for recognition and profile.

“In Estonia the sport is growing, but I am the only elite athlete from my country, so the team brings me a huge amount of support and it’s amazing to be a part of it,” said the 25-year-old. Being in this team with people from all around the world is so interesting. I am a bit of a ‘veteran’ now, so I would like to use that experience to try ensure qualification for Tokyo 2020 a little earlier than before; Rio 2016 was a learning experience and now I need two years of good health and consistency and with this team it will be possible.”

Chile’s Felipe Barraza has been part of the ITU Development Programme since 2008 and has also seen first-hand the impact that it has had on many of his peers as he has progressed alongside them.

“I have been part of the programme since 2008 and have developed with ITU, been through many years of camps with the team. Having the opportunity to train, learn from these coaches and athletes from all over the world over the years has made me the athlete I am today. Just being with the team in races rather than alone is a huge help, the knowledge and the meetings we have makes everything more professional. It’s a unique atmosphere here in Astana, but it’s always a great learning experience when you have the opportunity to race.”

The ASICS World Triathlon Team will reconvene in Cagliari in just a few weeks’ time as they continue their collective and individual journeys, setting and reaching goals and looking for the ultimate prize of a place at the Olympic Games.