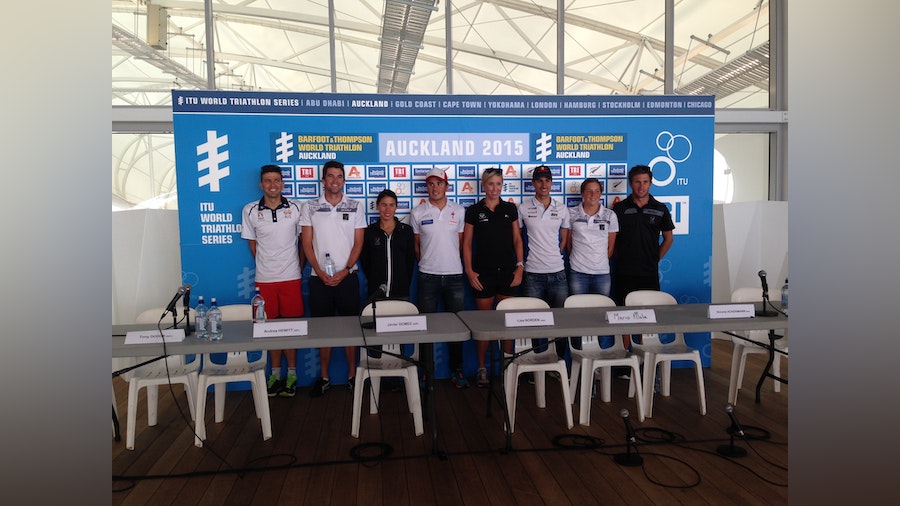 Ahead of the second race of the 2015 World Triathlon Series and first Olympic distance race, some of the sport’s top athletes met the press at the Cloud in Auckland on Friday afternoon. Here are some of the highlights of what Javier Gomez, Mario Mola, Tony Dodds, Ryan Sissons, Lisa Norden and Andrea Hewitt had to say.

Mario Mola (ESP)
On the early season racing
It’s only at the beginning, so if we want to keep things moving in a good way, being fit and healthy and training as good as possible. That’s what I’ve been trying to do so hopefully we can put on a good race here on Sunday.

Javier Gomez (ESP)
On his success in Auckland
“Auckland is probably my favourite race on the circuit I’ve been doing pretty well here, I’ve won three times, it’s a course I like and that suits me well. I always feel good (in Auckland), so that’s a good memory to have but it’s a totally new race going to the start line again, anything can happen.”

“I’m feeling quite well after a pretty average start in Abu Dhabi, it’s long year so hopefully I can have a better one here and keep building towards the rest of the season.”

Lisa Norden (SWE)
Re-emergence back into ITU racing after some time out.
“It’s very good to be back in the top 20 again, it’s been a while, I’ve had some fantastic training here in NZ I’ve been staying her for a month in January in Cambridge. I’m slowly working my way back into the series and into the sport again. There’s all these challenges coming back in, it’s has been a smooth trip but I’m glad to be back here.”

Andrea Hewitt (NZL)
On the course – a strength based one?
“It’s certainly tough there are no free rides on this course. There’s three hills each lap and especially with the forecast on Sunday with the rain, it’s going to be even more challenging. It’s going to be good for the New Zealanders who like the hills and I guess the strong athletes.”

“I started in Abu Dhabi, it was good going over there and doing the first race in a hot country, although a long trip it’s good to have a ranking going into this one.”

Tony Dodds (NZL)
After some struggles last year.
“I’m ‘fizzing’ to race actually. I haven’t been here for a few years so it’s good to come back. I’m surprising well, I’m trying to build myself into the year and looking forward to Chicago, things are going quite well.”

“One day you feel like Muhammad Ali and the next like a five year old in a paddling pool. On the day you wake up and see how you feel but I’m very excited to race here again.”

“No definitely not it was just bad luck it happens. I’m stoked to be back here in Auckland, I’ve had some pretty good races over the years, just good to back fit and racing.”

Aaron Royle (AUS)
Made a guest appearance for a bit of a showdown with Ryan Sissons on the impending World Cup Cricket final between Australia and New Zealand on Sunday.

How to watch
The women’s race will start at 12:50pm local time on Sunday, March 29, while the men open their WTS season later in the day at 3:40pm local time. Find international start times for women here and men here. If you haven’t already, buy your season pass to watch the races live at triathlonlive.tv. You can also follow along live on twitter @worldtriathlon.

Meeting in Abu Dhabi on 22 November, the World Triathlon Executive Board has…
World Triathlon’s member National Federations came together in person for the…
World Triathlon established the Women’s Committee Award of Excellence to identify…
more news →