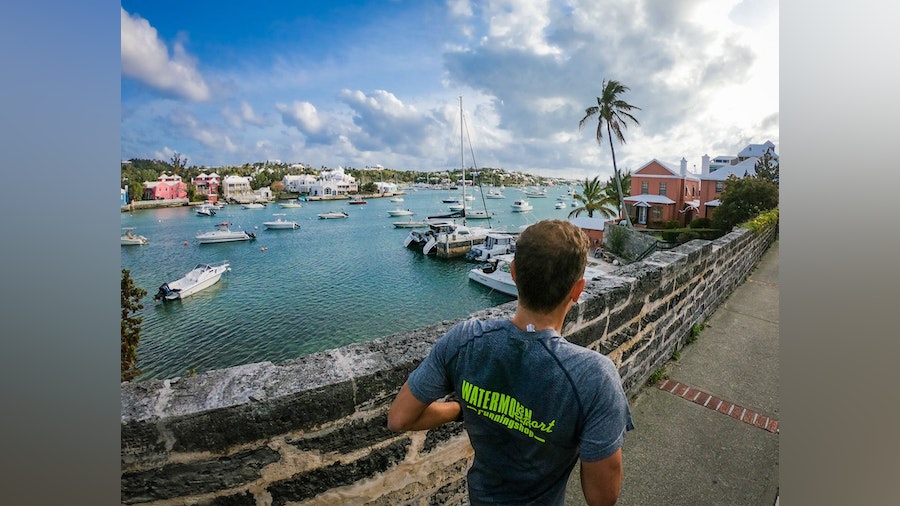 The World Triathlon Series will stop for the first time in Bermuda for the second race of the 2018 season. Home of World Champion Flora Duffy, the iconic island will welcome amateurs and elite athletes this weekend for four days of triathlon races for all ages and categories, and with the Elite ones going for the first Olympic distance race of the season. Welcome to the 2018 MS Amlin World Triathlon Bermuda.

52 men will be toeing the start line in Hamilton, for a swim in the crystal clear turquoise Atlantic, followed by a bike leg over steep hills and along beautiful stretches of picturesque coastline. The Elite athletes will face a 1500m swim the calm and transparent waters of Hamilton’s Harbour to then get ready for what is most likely to be the most brutal bike ride of the season: 10 trips up the infamous “Corkscrew Hill” followed by a technical descent, nice technical turns and corners with the magic background of the picturesque buildings of the islands.

After 40km on their bikes the athletes will head to the final 10km fast and furious run through downtown Hamilton, on Front Street, which will guarantee to have thousands of spectators. They will indeed cheer the athletes until they cross the finish line in the Stadium, all covered in blue carpet.

And one of the ones to watch this Saturday will be indeed Henri Schoeman. The South African, who will be wearing the golden number 1, is on fire this season, after claiming the victory in the Commonwealth Games in Gold Coast only three weeks ago, and claiming also the first WTS of the season, with a solid win in Abu Dhabi. “I’m excited to race in a new country and on a new course”, he told ITU a few days before the race. “I believe it’s going to be a difficult bike and run course which I think is great! I’ve had a great start to the season and I don’t want to put any pressure on myself, I’m just going to enjoy it and give it my best”.

Schoeman showed both in Abu Dhabi and in Gold Coast that his biking skills, especially when raining, are impressive, and might be of great use also in Bermuda, where the weather forecast at the moment show high possibilities of rain during race day.

Spaniard Mario Mola, current double World Champion, is also “really looking forward this race, on a new venue and on a place where I’ve never been before”. “I am very happy with my training those last weeks, I had some solid blocks of training after Abu Dhabi, and I’m confident that I can perform as I want and execute a great race in Bermuda”, he explained from the airport hours before landing in the tiny island. Mola finished in second place in Abu Dhabi, but haven’t raced since then, beginning of March, focus on training.

Mola will be once more the Captain of the Spanish squad, with Fernando Alarza and Uxio Abuin Ares toeing the start line with him after Vicente Hernandez had to pull out last minute due to an injury.

Abuin, along with Richard Varga and Schoeman, are among the stronger swimmers of the field, so they will probably try to break away from the first strokes in the clear waters of Bermuda.

The entry list also suffered the last minute withdrawal of Jonathan Brownlee, who missed a block of training in January due to a stress response, and even though he was able to compete in WTS Abu Dhabi and the Commonwealth Games -where he grabbed the silver medal on the Mixed Relay- it wasn’t quite enough to get the performance that he wanted so he decided to focus on training a bit more to improve with each race.

Along with Schoeman and Mola, another South African is most likely to make it to the front pack on the bike and run courses: Richard Murray. Even though he started the season in great shape claiming the World Cup on his hometown, Cape Town, he could only finish in 10th in the first WTS of the season, and 6th in the Commonwealth Games, so he is really looking forward being back on the podium in Bermuda.

Also aiming for the podium will be Vincent Luis (FRA), who has started this season the same way he finished last one: in the podium. The French grabbed the bronze medal in the tricky course of WTS Abu Dhabi, and will try to team up with another French, Leo Bergere and Pierre Le Corre, as they’ve been successfully doing in the last few races.

Other ones to watch will be the Norwegian Kristian Blummenfelt, accompanied in Bermuda by the young teammate Gustav Iden, or the Canadian Tyler Mislawchuk. Ben Kanute (USA), Jonas Schomburg (GER) or Alessandro Fabian (ITA) will likely be in the front pack as well.

Also on Friday and Saturday, 600 athletes from 33 different countries will be enjoying the multiple races planned for all ages and conditions. The vibrant city, with the picturesque buildings and shops, will be not only the perfect set up for the street festivals and parades planned during four days, but also a great show for all the spectators, who can enjoy the cafes, bars and restaurants lining the course to watch the action from street and balcony levels.

The elite men will kick off the 2018 MS Amlin World Triathlon Bermuda event on Saturday, April 28 at 13:00 local time. The women will follow shortly after at 16:00. You can catch both races LIVE and on-demand on TriathlonLIVE.tv and follow along with play-by-play updates on our Twitter @TriathlonLIVE as well as Instagram and Facebook. You can also join in on the conversation using #WTSBermuda.