Blummenfelt, Stornes and Iden: Raising the flag for Norway at Tokyo 2020 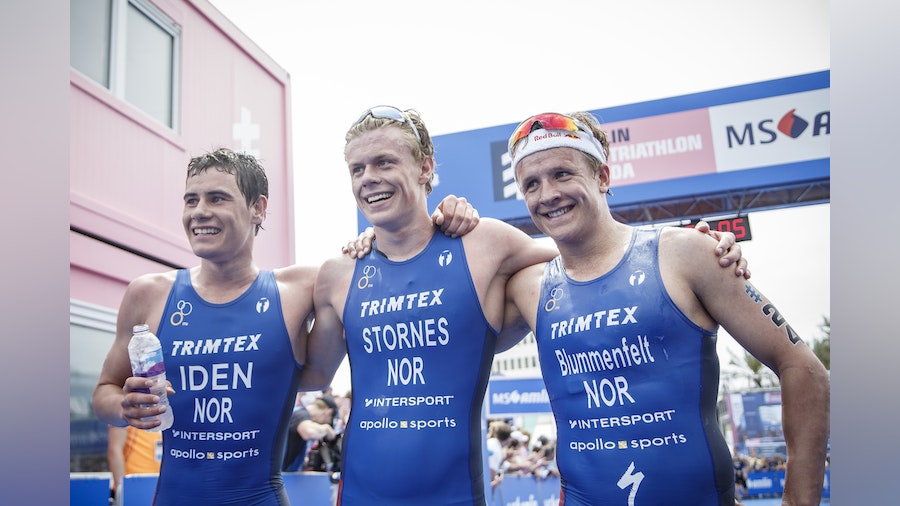 Something special happened on 28 April 2018 as Bermuda made its debut as a host of the World Triathlon Championship Series, a subtle shift in the balance of triathlon power towards Scandinavia courtesy of three men. Casper Stornes blew apart the field for most of the 40km bike and held on for a debut Series gold while behind him, Kristian Blummenfelt and Gustav Iden had put in incredible runs off the back of their own break to land silver and bronze.

All three were wearing the signature deep blue of Norway, all three celebrated like they had won. It was the first time any nation had swept the podium at the top level of men’s racing, and it heralded a new era of Norwegian triathlon. The mastermind was Arild Tveiten, and it was the clearest evidence that the country’s high performance coach was right to have his sights set on a historic first Olympic Triathlon medal for the country at Tokyo 2020.

“I don’t think many people would have thought we could do that four years ago,” said Iden in his post-race interview that day before adding ominously - “Now we’re ready to take on the world.” Stornes and Blummenfelt went on to credit their coach as the man behind the transformation, as well as the bond and team spirit between the three of them.

Since that day, the trio’s success has continued but in varied forms. Stornes took silver in the Tokyo Test Event, Iden became the youngest Ironman 70.3 World Champion in Nice and Blummenfelt won a brilliant 2019 season closer in Lausanne. More recently, Blummenfelt has powered home at 2021 WTCS Yokohama and the World Triathlon Cup Lisbon to underline his big-race credentials once more. With no Norwegian Mixed Relay team qualified for Tokyo, all three will know they still have a great shot at bringing home at least one individual Olympic medal between them.

“This has been on the radar for ten years,” said 27-year-old Blummenfelt from training camp in Girona. “When we came together in 2009, we had 2020 on the schedule as the big goal and the ambition was to win a gold medal. This is something we have been working on for more than ten years and it is going to be very special.”

Reaching the Olympic Triathlon Mixed Relay start list may have been a stretch too far, albeit by the tightest of margins, as the team finished just off the podium in fourth after the Lisbon Qualification event, but the unique set up of the Olympic triathlon race looks like playing to the strengths of a men’s squad that has trained and raced so well together for so long.

“(In Tokyo) all three of us can race as we normally do, while the bigger teams will have their numbers limited to just three athletes maximum. The bike is more likely to have an impact and there are fewer people to hide behind, but we will still have that strength. The harder the race goes from the gun, the better for all three of us.”

The three train hard and race hard, relishing tough courses, loving throwing down challenges to their rivals, asking questions and pushing buttons from the start horn to the finish chute. For Iden, that meant finishing a disappointing 2020 strongly was a massive boost just at the right time.

“For me, 2020 had some ups and downs and I didn’t really perform. My biggest race I missed out on with a stomach bug, but I had a really good race in Daytona so was happy how it finished. The biggest goal now is of course Tokyo and we have done all we can to prepare for it. It is hard to follow the plan you’d like because of the travel restrictions and I wont have been home since January after the Olympics, but we have become accustomed to this and have a good plan to perform in Tokyo.”

Blummenfelt will hit his second Olympic start line after the ‘bonus’ of qualifying for Rio 2016, a race where his expectations were realistic but the learnings priceless. For the debutants Stornes and Iden, the Tokyo Test Event was the best preparation they could have had, finishing second and fourth respectively. Now 25 years-old, Iden does, however, have major Games experience of a different kind; the first ever European Games in Baku 2015.

“I think I was the first DNF in the history of those Games and that was the worst experience of my life, so I hope Tokyo will be a different race and I will have some learnings from Baku.”

So is it time to back the trio for at least one Olympic medal on 26 July? The Norwegians would.