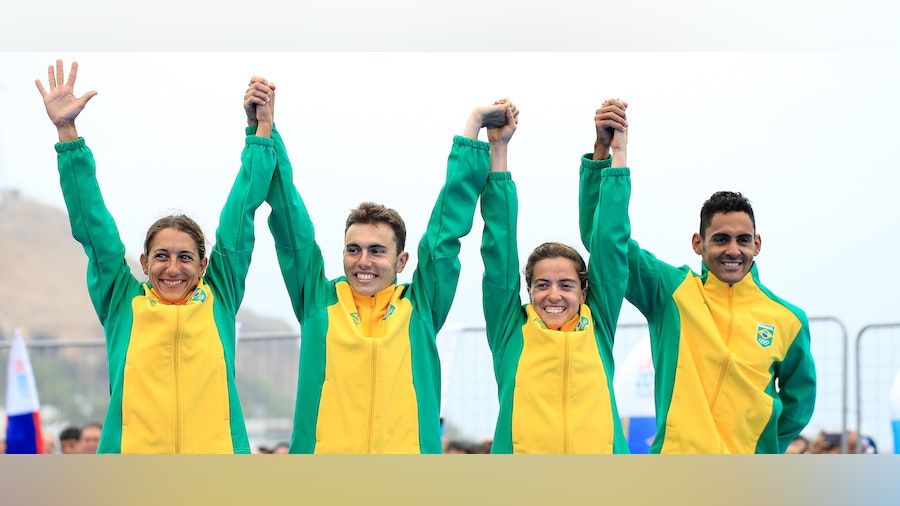 The teams, made up of 4 team Members, lined up to race the super-sprint format. It was Cecilia Perez from Mexico, Desirae Ridenour from Canada, Elizabeth Bravo from Equador and Baptista from Brazil who were the first into transition and out onto the bike.

By stage 2 of the relay Brazil had taken charge of the race and Baptista who would tag off with Kaue Willy. Team Canada made up some time and Charles Paquet was the next man off followed by Juan Jose Andrade of Equador.

Out of the second swim of the day there was a battle at play between Canada’s Paquet and Brazil’s Willy. A few seconds back and on the chase was Irving Perez from Mexico and Andrade.

The fight for lead position continued between Brazil and Canada while drama unfolded with Equador, Mexico, USA and Columbia as they formed a tight chase group.

By the third stage Canada made a quick move to takeover Brazil. Throughout this stage Canada and Brazil extended their lead out on the bike. USA’s Sophie Chase, Claudia Rivas from Mexico and Diana Costillo from Columbia were on the charge, searching for podium placement. Brazil’s Vittoria Lopes, silver medallist in the elite women’s individual event, made a break and rode away from the field to lead the race and pass the baton to Messias, for the final exchange of the day.

Chase tagged USA’s Austin Hindman, Hannah Henry flew in to tag Alexis Lepage and the pressure was on elite men’s individual triathlon champion Crisanto Grajales charged out for the final stage of the day. The medals were yet to be decided.

In the early portion of this stage, Grajales made up significant time to put himself in contention of a medal. Brazil’s Messias was flying across the course with Lepage producing an impressive super-sprint race combination in second.

In a thrilling race finish Messias was the first athlete across the line and team Brazil were crowned Triathlon Mixed Relay champions at the 2019 Lima Pan American Games.

“We did it as a good team, we are the best friends ever. But we are not just friends, we raced as a family. I am really happy. This is new to Brazil, nobody expected that. It was all teamwork,” said Baptista.

“I wanted to define the race on the bike ride and it worked very well. I opened a distance on the hill that I knew was hard for my opponents to reduce. It’s very important not only for Brazil but for our sport. In our country the sport is not that big and maybe now our victory will attract people to start practicing it,” Messias said.

Canada produced a remarkable team combination which saw them earn the silver medal and Grajales stormed across the finish line in third place and the Mexican collective were presented with deserving bronze medals, all athletes producing sensational performances across the fierce level of racing.

The Canadian quartet, made up of Ridenour, Paquet, Henry and Lepage, gave their all to take the medal just 17-seconds behind champions Brazil after an epic 1-hour-20 minute swim-bike-run tag-team battle.

“Cohesion is really important when it comes to the relay as we’ve seen the past few races with these guys,” Christia said.

“When the team cohesion goes up, the results go up and it just forces the team to give everything they have for the whole collective,” added the Canadian coach.

“The goal was to come to Lima to win a medal and we knew the best chance was the relay. I could have had a really good race on the individual side, but for me the most important thing is the team. In a sport where solo efforts traditionally grab most attention, Lepage sees career advancement through being part of something bigger,” said Lepage.

“I am looking forward now to Tokyo 2020 Olympic Games qualification event (August 2019) and I think I can be a really good team-mate in a team like this,” Lepage added.

“We are so happy with this result, we have worked so hard with our team and coach for the Pan American Games and to make it on the podium in the individual and relay events is an amazing result. We are so proud and honoured to represent Mexico,” Grajales said.

USA were the fourth team across the finish line with a mighty performance while Ecuador finished in a commendable fifth place.