But much of the post-race discussion surrounded around 2-time World Cup winner Kirsten Sweetland who was disqualified after unknowingly cutting a corner on the run course.  Entering the competition as the pre-race favourite, the Canadian was in excellent position to take the title before being disqualified by race officials.

Moreno posted the second-fastest run split of the day, catapulting her to her first ever Pan American Championship.  She broke the tape at 2:04:52, more than 30 seconds ahead of silver medallist Jorgensen.

In the men’s field, American Matt Chrabot used a typically strong biking performance to cruise to the Pan American Championship with a time of 1:54:58.  Coming off a bronze medal performance at the Huatulco World Cup last weekend, Chrabot capped off a successful few weeks of racing in Mexico with his second career PATCO title.

The races were contested on the same course that will be used for next year’s Pan Am Games. 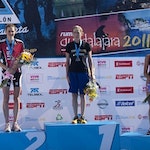 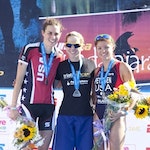