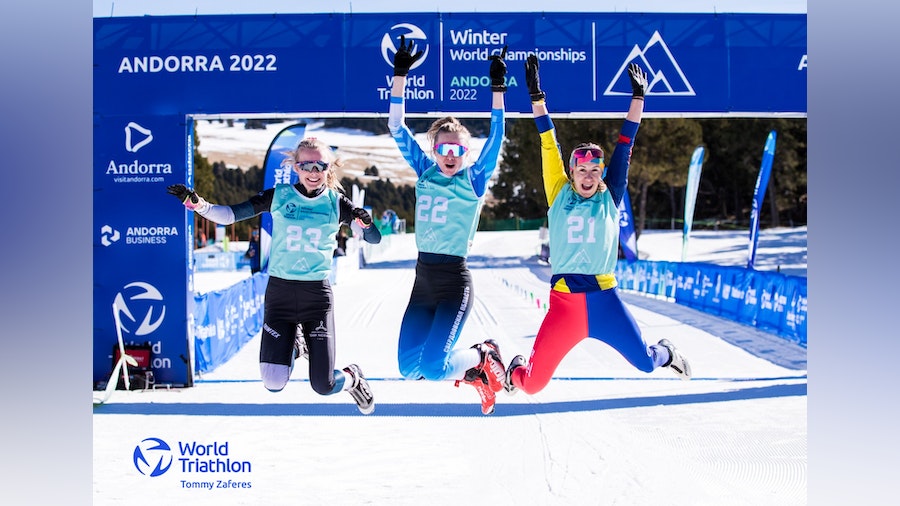 In his second year competing in the Elite category, Italy’s Franco Pesavento stormed the field of the inaugural World Triathlon Winter Duathlon Championships to claim the title, crossing the finish line more than two minutes ahead of Viorel Palici (ROU) and Hans Christian Tungesvik (NOR). The sunny morning in Andorra ended up with the athlete representing the Russian Federation Anna Medvedeva claiming the gold medal, with Norway’s Ine Skejellum crossing the finish line in second and Maria Luisa Rasina (ROU) in third place.

The run-ski format of the duathlon may remove the biking element, but the new format -three laps of 1,35km each on the run, two laps of 3,1km each on skis, and the whole block repeated three times- meant there were multiple transitions to negotiate and also multiple opportunitties for spectators to cheer on the athletes every time they passed through transition: a total of 5 times.

Men’s race
The Elite and U23 men were the ones opening the day, with temperatures slightly over 6ºC and the sun heating the slopes of the beautiful mountain resort of Naturlandia, home of the 24th edition of the World Triathlon Winter Triathlon and Winter Duathlon World Championships. And it was a young Italian, Franco Pesavento, only 25 years of age, who decided to go full gas from the gun, taking the lead the second the athletes touched the snow, making it clear from the beginning that he was going to be the man to beat.

The first time the athletes headed the first uphill on the run, he had already a sizeable gap, only Benjamin Cayroche (FRA) able to follow him. And by the time the athletes had to put on the skis for the first time, Pesavento was clearly giong solo. With the cross country ski slope fresh and hard, it was not easy for the chasers to get hold of the Italian, who was building his confidence and showing great skiing skills. He knew that he had some strong skiers behind, like the current Winter Triathlon World Champion Hans Christian Tungesvik, and didn’t want to leave any chances.

Behind Pesavento, it was a Roumanian, Viorel Palici, who led the chasers all day long, opening also a significant gap with the athletes fighting for the third place: Tungesvink and Mikhail Antipin (RTF). The first one showing his skills on skis on every segment, and the second one taking the lead every time they passed by transition, with quick and systematic moves that made him arrive always to transition in fourth place, leaving in third.

Pesavento executed his race plan to perfection to cross the finish line with a comfortable lead, stopping the clock on 1h46min12sec to claim the first ever Winter Duathlon World Championship. “I am really happy, was not expecting this. I planned this race today as a training session for the winter triathlon world championships this Saturday, to get used to the venue and the course, and it played out well. The course is really hard, and being by myself almost all race didn’t make it easier. I now need to recover for Saturday”, he said.

Behind him, it was Palici who finished in the second place, the best result of his career for the veteran Romanian triathlete, who will also be competing in the winter triathlon race on Saturday. The thirs place was for the current Winter Triathlon world champion, Tungesvink, who managed to leave Antipin behind in the last 3km on the skis, the segmen that also gave him the winter triathlon title last year.

In the U23 category, another fantastic performance of the Italian squad gave Mattia Tanara the world title, to add to the winter triathlon U23 crown that he got last year also in Andorra. he was followed on the finish line by Marin Gautier, from France, and Ian Pennekamp (NED), who completed the hard circuit in less than two hours.

The Junior Men Winter Duathlon world title was for the Spaniard Alvaro Lopez Lucia, who competed on the sprint version of the circuit, half of the distance of the older athletes.

Women’s race
The U23 and Elite women athlete decided to use the Duathlon World Championships to not only have a feeling of the course before the Winter Triathlon world champs this Saturday, but also as a hard trainin session. But the duathlete from the Russian Federation Anna Medvedeva made it look easy, managing to lead the race from start to finish, to claim the victory with more than five minutes of a difference with her rivals.

Looking determinated from the start, she made the icy run on the hilly course of Naturlandia look easy, negociating every ramp with ease and was all smiles when crossing the finish line all by herself. Behind her, it was Norway’s Ine Skejellum trying to prove that the dominance of her country in the winter races last year was not by accident. Skejellum, a former cross country skier, managed to reduce a bit the gap with Medvedeva on each ski segment, but it was not enough to be on a position of fighting for the gold. The Norwegian finished the day claiming the silver medal, the first of her triathlon career, which put her on a great position to fight for the podium this Saturday.

The third spot on the podium was a hard battle between Romania’s Maria Luisa Rasina and Norway’s Julie Meinicke, with Rasina showing her credentials in the last segment on skis to claim the bronze medal, the Norwegian being the U23 World Champion. 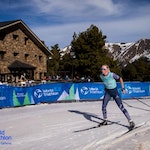 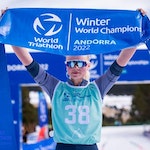 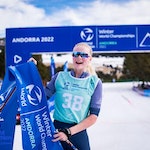 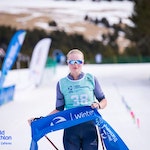 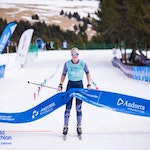 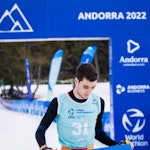 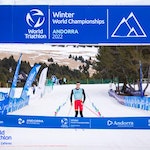 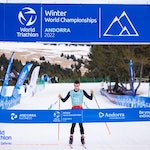 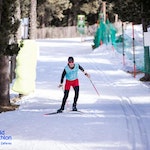 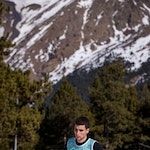 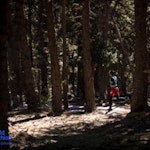 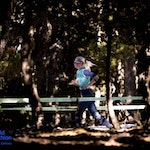