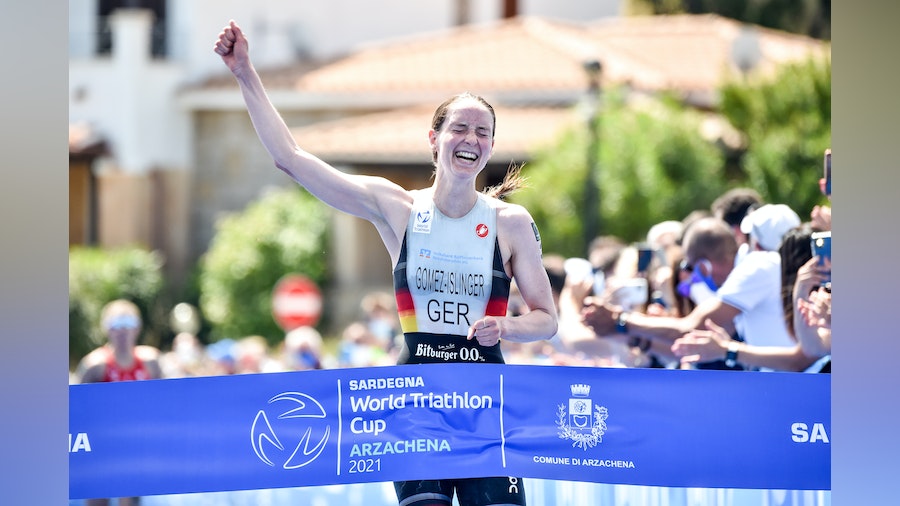 A sun-baked World Triathlon Cup Arzachena saw 57 elite women line up for one of the toughest sprint-distance courses ever seen on the circuit, and it was to be Marlene Gomez-Islinger’s day as the German timed her final-lap push perfectly to earn a career-first World Triathlon Cup gold.

Switzerland’s Julie Derron had looked in total control out of second transition and onto the run, but was caught and passed with just a few hundred metres to go, while behind her Verena Steinhauser had moved her way into the medals and a second successive bronze on this course.

“I tried to run very conservatively and had enough energy towards the end to do a good sprint finish,” said a thrilled Gomez-Islinger. “The girls gave me a hard time on the hill but I’m proud of myself for what I did today and I put together a perfect race.”

—
There were familiar faces leading the way in the water as the swimmers reached the first buoy, Vittoria Lopes (BRA) slicing through the water with Zsanett Bragmayer (HUN) and Helena Carvalho (POR) in close company.

As they came back onto the beach and swung round onto the sand and up into transition, Lotte Miller (NOR) and Lena Meissner (GER) were right in check with that lead group, Gomez-Islinger with Therese Feursinger (AUT) and Lizeth Rueda Santos (MEX) 20 seconds back, the likes of Barbara Riveros (CHI), Kaidi Kivioja (EST) and Lisa Tertsch (GER) with more ground to make up.

Steinhauser, Carvalho and Audrey Merle (FRA) were the first to attack the hill, but they were quickly caught and a 12-strong pack formed and then strung out on the first descent.

Miller was going well on the second climb but then losing precious ground on the descent, and Steinhauser looked the most comfortable negotiating her way back through transition at the bell. Riveros had moved up to the leaders by now, also including Derron, Lopes and World Cup debutant Emma Lombardi (FRA) in the now nine-deep group.

That was how things stayed for lap three but it was Derron moving into pole and emerging from transition and onto the run still looking fresh despite the heat. Bragmayer was still in check at this stage too, Merle right on the Swiss shoulder.

Ten seconds back, though, it was Gomez-Islinger who started to move into position on the first 2.5km lap. Derron was composed and barely glanced back until the bell sounded. Then at the 4km mark, the gap that had hardly changed for most of the run started to close. Fresh from the German team trials in midweek, 28-year-old Gomez-Islinger was clearly in the flow once again and as the grandstand came into view, Derron was caught.

From that point on there could be no doubt of the winner, taking the long turn towards the chute with daylight behind and finally the tape with 10 seconds over the Swiss and relief and delight across her face. It was a first ever podium at this level for the German, and another important step towards Tokyo for Derron, while Steinhauser held on for a second successive bronze.

Having looked almost like losing touch at one point on the bike, Audrey Merle hung on for fourth place, Bragmayer fifth, with a brilliant debut sixth place for Lombardi. Riveros, Tertsch, Carlotta Missaglia (ITA) and Alberte Kjaer Pedersen (DEN) completed the top ten.

“I had a quick transition, went for it and then never looked back. I knew the girls from behind were coming strong so I just kept pushing and never looked back,” said Julie Derron. “It will be a dream of mine (to be selected for the Tokyo team). Most of my training squad will be there as well. I hope today is a big step for being selected for Tokyo.”

“This race is always hard, even harder than last year,” said Steinhauser. “There was a little bit of wind on the bike and the girls were so good. I kept pushing and pushing on the hill. I had some difficulties in T2 and I lost some time, but I am so happy. To perform so well in Arzachena gives me confidence for Leeds next week.” 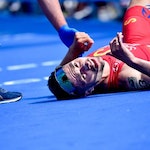 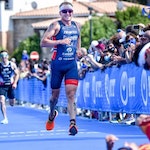 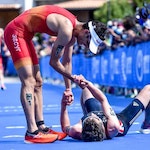 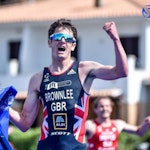 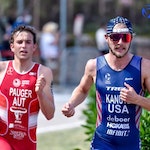 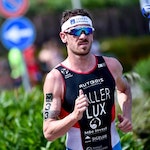 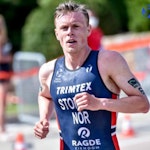 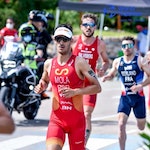 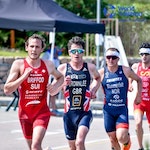 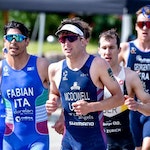 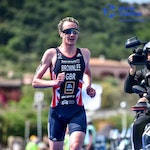 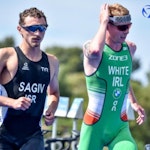