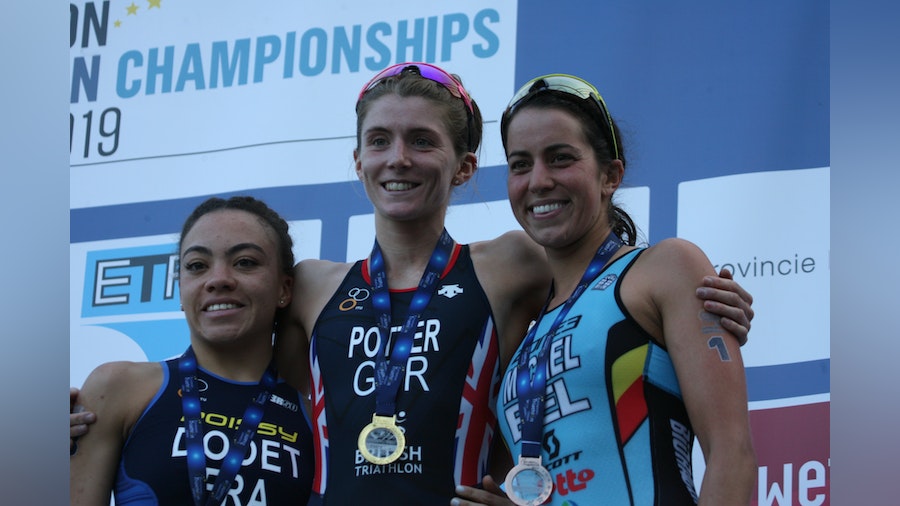 With 57 women from 25 different countries, but with the defending title-holder not present this weekend in Weert, the Elite Women’s race of the 2019 Olympic Distance European Championships was more open than ever. And after a consistent performance from beginning to end, it was Great Britains excellent runner Beth Potter taking the crown for the first time of her career, with France’s Sandra Dodet crossing the finish line in second place and Belgium’s Claire Michel in third.

Coming out of the water on the first lap, it was Spain’s Sara Perez Sala who led the women out of the water after the first lap. On her heels were Russia’s Diana Isakova, Theresa Feuersinger (AUT), Sandra Dodet (FRA) and GB’s Olivia Matthias. This would be a powerful combination out on the bike course. A massive swim from Beth Potter placed her in the leading group and she held this position for the second lap, to exit the water in an incredible 9th place.

The breakaway had not taken place and once out on the bike, a strong peloton of 18 athletes started to work hard to close down any threat from the chase group. The lead grew until it was over 90 seconds and at this stage, with Potter well-placed in that group, it was more or less a certainty that she would claim the title.

No spills or crashes meant that this group of 18 would come as one into T2. Potter soon established a lead, with Dodet and Claire Michel chasing. Three laps on the run and Potter’s style was so easy. Every pace seemed to propel her forwards but Dodet dug deep and kept the Brit in her sights. Michel did her best to keep both in view on the twisting and technical course and the three were able to pull away from the next threat, Emilie Morier (FRA), who only 5 years back had qualified for the Youth Olympics on this very course.

The final lap saw the run power of Potter settle the score and with a 33:23 10k, she smiled all the way down the blue carpet, to the delighted cheers of the many British Age Group athletes and supporters who had lined the street and especially the finish area. Behind her were Dodet and Michel, with Morier finishing in fourth place and Vendula Frintoza (CZE) in 5th.

In the Women’s Junior race, disputed over a sprint distance as per usual in this category, the victory was for the race favourite, Beatrice Mallozzi (ITA), dominating from the beginning of the bike course. The technical course proved safe enough for the athletes and coming into T2, the Italian was pretty much assured of a clear run, with her supreme pace. By the end of the first lap she had made her mark on the race and behind her, the race for silver and bronze was underway. The biggest threat to her seemed to be Austria’s Magdalena Früh but her silver medal position was snatched in the final stages of the race by Switzerland’s Nora Gmür who ran so well to claim that runner-up medal.