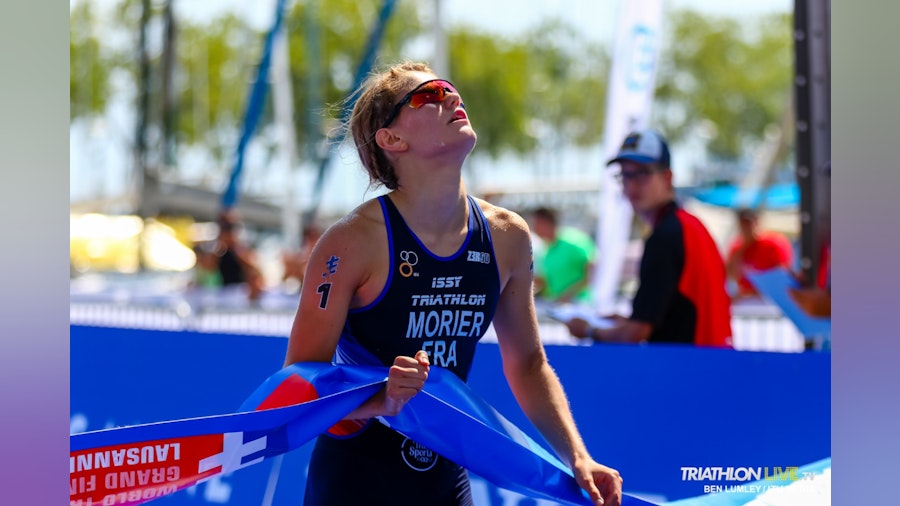 It was across a blistering first three laps of the 10km run at the 2019 U23 World Championships that Emilie Morier was able to write the records in Lausanne, digging into her reserves to summon an almighty effort for the gold. Pulling away from the likes of Olivia Mathias (GBR) and Kira Hedgeland (AUS) straight out of T2, the French star never looked back, only tiring over the final kilometre, by which time the title was already hers.

“It’s an amazing day for me and I worked very hard during the race. I had a very good performance in Tokyo and today I am World Champion. All my family are here and I am really emotional. I stayed focussed but it was a tough race, that last lap was so difficult but now I am World Champion.”

—
The U23 women took to the pontoon at midday, a 1.5km swim ahead of them as they dived into Lake Geneva. Sweden’s Emma Varga was the first to find her rhythm, threatening to pull away after a great start, only for Hungary’s Dorka Putnoczki and Sophie Alden (GBR) to find their groove and lead the field out at the halfway stage and back into the water.

Morrier and Erika Ackerlund were also going well, before Hedgeland found her stroke and put herself out front as they finally put the swim behind them and flew into T1.

Hedgeland wasted no time stepping on the gas and after an excellent transition, while Ackerlund’s was the last name able to tag onto the front pack of eleven riders that also included Therese Feuersinger (AUT) and Raz Poradosi (ISR).

First it was Alden who fell away as the hill took its toll, while homing in but still some way back were Kate Waugh (GBR) and German duo Lisa Tertsch and Lena Meissner, Feuersinger just in their sights. With Mathias driving things forward ahead, the gap grew from 35 seconds to 50 and at the bell would be just over a minute, with Putnoczki the next to drop back.

Fully aware of the strong runners behind, Morier knew that even a 65-second lead may not be enough over a hot and hilly 10km run so she immediately laid down the gauntlet to those around her as they came out of T2, stretching away for a first lap that was over 20 seconds quicker than that of next-best Mathias.

Tertsch and Waugh could match the leader’s pace on lap two, and as Ackerlund’s challenge drifted away, it was Mathias who found herself all alone in second place, Hedgeland 18 seconds back, Feuersinger 45 seconds.

While Morier slowly ground down to a jog over an exhausted final kilometre, the lead was such that no serious challenge could be mounted, even as Mathias closed in to just six seconds behind at the line. Tertsch and Waugh passed Hedgeland before Tertsch was able to stride away and secure herself the bronze, Waugh finishing in fourth, Hedgeland fifth, Poland’s Alicja Ulatowska holding off Meissner for sixth.

“I knew we just needed to get a gap in the second pack because I knew how good the leaders were,” said Olivia Mathias. “Me and Emily were just trying to work together and it worked. I went in for my life. I knew I just had to get through the third lap. I just went as fast as I could to get to the line.”

“That was amazing,” added Lisa Tertsch. “I tried to be conservative in the beginning and push it at the end and it worked out super well. It was great to run with Kate (Waugh), we worked together and try to get as far ahead as possible. In the beginning I didn’t think I was able to get a medal and suddenly we were I third and fourth. I really wanted that medal.