Battling through the elements of the Mexican sun and the infamous hill climb, Jolanda Annen (SUI) captured her first-ever career World Cup victory on Saturday at the 2016 Huatulco ITU Triathlon World Cup.

After leading out of the swim and then working as one of the top contenders on the bike, Annen built up enough of a lead to carry her onto the run and charge through to the finish line to also secure her second consecutive Huatulco podium after earning the silver medal in 2015.

“I am really excited; I cannot believe it. I was so disappointed after my last race in Cape Town, it was a really bad race and then I come here to Huatulco and I just can’t believe it! The hill for me is really good because in Switzerland we have mountains so I think it is very good for me.” said Annen of her victory.

Another first-timer was silver medallist Agnieszka Jerzyk (POL), who scored her first career World Cup podium after today. And the bronze medal went to Yuliya Yelistratova (UKR), who put forth one of the more impressive performances of the day after needing to make up time on the bike after having a flat tire in the cycle.

Jerzyk said of her silver, “I am very happy because it was a very important race for me because I find out if I get my ticket to Rio. The last five months were very stressful and this is a small souvenir for me. It is my first podium in my career, I am just so so happy!”

Under evening skies that still carried the heat of the day, the women took the line with earning Olympic points on the mind. After a beach start, Mari Rabie (RSA) and Annen created a small gap after the first lap of 750 metres. They were able to hang on to their lead throughout the swim and exited first out of the water with an advantage of 12 seconds.

While Rabie and Annen were able to start on the bike with a small lead, it only managed to stick for one lap. On the second cycle, two smaller chase packs lead by Canada’s Paula Findlay and also included Kirsten Sweetland (CAN), Yelistratova, Miriam Casillas Garcia (ESP), Mateja Simic (SLO) and Cecilia Gabriela Perez (MEX) merged together and then caught the leaders, so the front pack entered the transition zone tallying 18 after enduring the hard-hitting eight-lap standard distance course.

On the sixth lap, Yelistratova suffered a bike puncture that resulted in her needing to stop and change her tire and cause a gap of 36 seconds. But after a powering bell lap, it was as if the flat tire never happened and she was able to enter the second transition with the remaining 17 leading ladies.

With legs drained after the grueling cycle course, the run immediately spaced out. Rabie, Annen and Jerzyk took to the test and were the frontrunners through the first lap. However Rabie started to feel the heat of the day and slowly desended off the top. It was Yelistratova then who positioned herself into the final podium position.

Annen seized the final lap as her own and proved that the conditions were no match as she emotionally crossed the finish line and landed her first-time gold at 2:14:06.

Jeryzk followed a short 13 seconds later, while Yelistratova finalized the podium by coming in third.

“It was a tough race for me, but it is my favourite race course. I came here aiming for podium, maybe wearing number one put some pressure on me but I wanted to do well,” said Yelistratova. 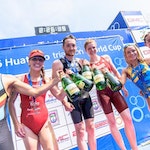 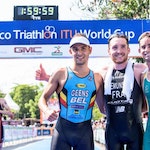 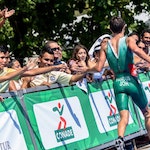 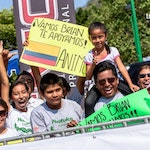 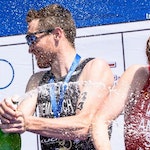 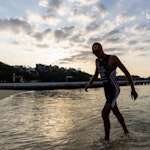 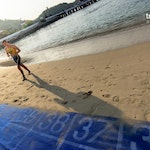 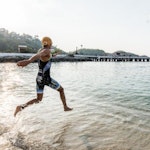 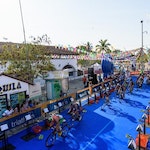 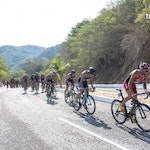 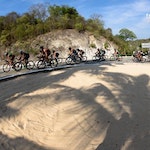 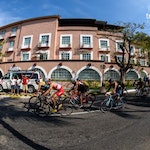