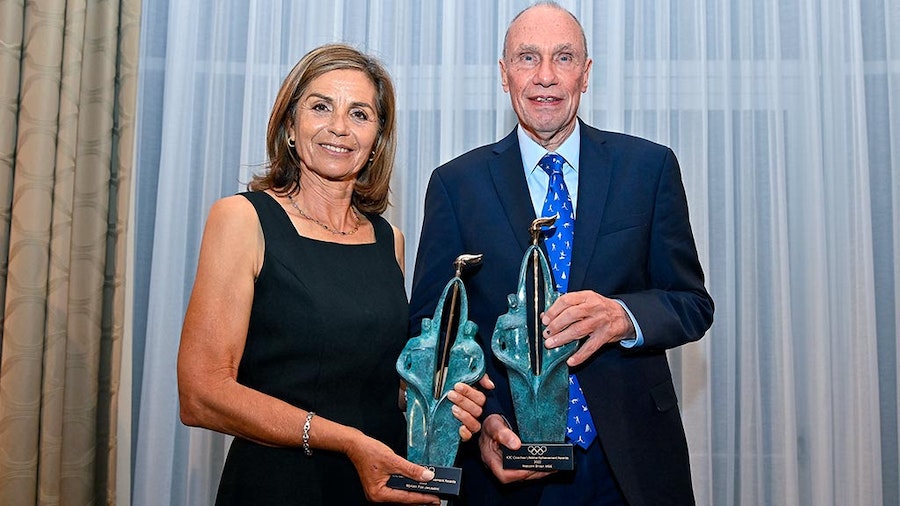 Malcolm Brown has coached athletes to five Olympic medals in triathlon and has dedicated his life to coaching and bettering the lives of others.

IOC President Thomas Bach, a gold medallist in fencing at the Olympic Games Montreal 1976, said: “The IOC Coaches Lifetime Achievement Award is a celebration of the incredible dedication and contribution that the recipients have made to the athletes they have coached, both on the field of play and beyond sport. I know from my own experience how important coaches are in an athlete’s career. Myriam Fox-Jerusalmi and Malcolm Brown have left a major mark on their sports and have helped their athletes to become real champions in sport and in life.”

Sergii Bubka, Chair of the IOC Athletes’ Entourage Commission (AEC) and member of the expert panel that selected the winners commented: “Coaches are pivotal in helping athletes fulfil their potential and be at their best. Not only are they experts in their sporting fields, but they are also pillars of support and guidance throughout an athlete’s career, both on and off the field of play. The relationship between athlete and coach is fundamental to performance and fulfilment, and we are delighted to be able to celebrate it with these awards.”

An instrumental figure in GB triathlon

Malcolm Brown has coached athletes to five Olympic medals in triathlon, including Alistair Brownlee, the only athlete to hold two Olympic titles in the triathlon event, as well as fellow Great Britain team-mates and Olympic medallists Jonathan Brownlee and Vicky Holland.

A physical education teacher by trade, Malcolm has always showed his passion and dedication to improve athletes’ life. He initially coached in his spare time, mostly on a volunteer basis, and then coached professionally, first in athletics and then in triathlon.

“It is a fantastic honour to receive the IOC Lifetime Achievement Coaches Award,” said Malcolm. “My sincere thanks go to the IOC for the Award, to Jonny Brownlee for the nomination, to my family for the many years of unswerving support, to numerous individuals and organisations who facilitated my coaching and finally, to all the athletes who entrusted me with their sporting careers.”

“Achieving Olympic success requires more than training, skill, science and technique. It requires belief and trust. It has been a privilege to receive that trust. I am pleased to report that the sport of triathlon in the UK continues to develop and remains in great shape as it prepares to meet with our competitors and colleagues in Paris 2024.”

Formerly the Head Endurance Coach for UK Athletics, Brown’s influence was crucial in establishing and revolutionising the Leeds Triathlon Centre in Great Britain. It was the place where the Brownlee brothers trained and where Non Stanford has taken up a coaching role following her retirement after the 2022 European Triathlon Championships. With Brown at the helm, the centre expanded from just three athletes to almost 100.

“I nominated Malc because he has been the biggest influence on my career, and I think there will be a lot of people that would say the same,” revealed Jonathan Brownlee, who won Olympic gold, silver and bronze medals under Brown’s tuition.

“I started turning up at the track at 14 and Malcolm was ever present through to 2016 (when I was 26). I grew up and changed through that period; and the best thing about Malcolm was that he adapted with me; his style changed through the years, as did his understanding of the ever-changing requirements of triathlon.”

“I will never forget those early years when Malc coached from the side of the track still wearing his suit from work. Stopwatch in one hand and umbrella in the other. Malc was always there to give me words of wisdom whenever I needed it. After spending half an hour with him I believed I could win any race! I am delighted he is being recognised with this award – he deserves it!”

Building a new pathway for female athletes and coaches

Myriam Fox-Jerusalmi represented France at two Olympic Games in the canoe slalom K1 event – Barcelona 1992 and Atlanta 1996 – winning bronze at the latter. Since then, she has gone on to establish a successful coaching career in canoe slalom spanning over 25 years.

“I was very surprised first, and very honoured, to have been recognised internationally for my career as a coach,” Fox said. “As a coach, I am passionate about our sport and wanting to help our athletes reach their potential. This award is very special as it acknowledges my contribution in high level sport as a female coach for so many years, but it also puts canoeing and Australia in the international Olympic spotlight.”

“I’d like to thank all who have supported me in my career as a coach; this award is the pinnacle of sport achievement for coaches and I’m extremely proud,” she said.

Among the Australian athletes she has coached to international success is her daughter Jessica Fox, who won gold at the Olympic Games Tokyo 2020 in the first-ever women’s canoe slalom C1 event. This made her the greatest canoe slalom athlete of all time, with nine world titles, one Olympic silver, two Olympic bronze and one Olympic gold medal to her name, along with a gold medal at the Youth Olympic Games Singapore 2010.

“Myriam is one of the few female coaches practising in Australia and around the world in canoe slalom, and she has always been a strong advocate for female athletes, gender equality, and the importance of developing good humans before athletes,” said Jessica Fox. “She was also part of the lobbying to achieve gender equality in canoe slalom, with the inclusion of the women’s canoe event at the Olympic Games. It’s one of the reasons Tokyo was so special, achieving that first ever women’s canoe Olympic gold medal was an incredible moment to share together. I’ve been lucky to have her as a coach, her passion and vision in the sport is inspiring, and there’s no slowing her down! As one of her athletes (and as her daughter too!), I’m so proud to see her receive this award and be recognised in this way”.

Launched for the first time in 2017, previous winners have included:

Despite the achievements and influence of such female coaches as Fox-Jerusalmi, only 10 per cent of accredited coaches at the Olympic Summer and Winter Games over the past decade have been women. While there was some slight progress at Tokyo 2020 – rising to 13 per cent – figures remain very low.

The IOC has recognised a need to increase the opportunities for female coaches and launched an initiative called the Women in Sport High Performance Pathway (WISH). The WISH Programme has been developed with a team of specialists based at the University of Hertfordshire in Great Britain to support female coaches who have already demonstrated potential and ambition in gaining key roles at the highest level of their sport.

Olympic Solidarity is investing USD 1 million in the WISH Programme and will run four cohorts during the current quadrennium. This will benefit more than 100 female coaches, providing them with the platform to kickstart a successful career as a coach in elite sport.