Jarrod Shoemaker, the 2008 Olympic triathlete from the United States, claimed the elite men’s title at the 2009 ITU Duathlon World Championship on home soil in Concord, North Carolina, USA.  Shoemaker utilized a strong finishing kick to edge out Damien Derobert of France and Jurgen Dereere of Belgium.  Shoemaker finished the 10km run - 40km bike - 5km run course in a time of 1 hour 49 minutes and 2 seconds.  This is Shoemaker’s second world title, after winning under 23 gold at the 2005 ITU Triathlon World Championship in Gamagori, Japan.

The 60 competitors went out strong and remained closely packed throughout the opening 10 kilometre run, with Portugal’s Sergio Silva along with Shoemaker ushing the pace. Out onto the bike, the lead group was 14 for half of the six laps, but grew to as many as 18 as four chasers bridged up over the course at Lowe’s Motorspeedway.

“These guys are great athletes. I knew Derobet would do a sprint. I saw him right next to me and I said ‘this is it’.”
Jarrod Shoemaker

A crash on lap five nearly ended Shoemaker’s day, but he was able to join a chase group and worked his way back to within sight of the leaders. Starting the second run Derobert, Dereere and Silva were side by side and headed for the podium, with Shoemaker out of the top ten, close to twenty seconds back. But the American was able to pull to fourth after the first 2.5k and continued to pick off competitors until he entered the speedway complex with Dereere and Derobert and the finish line in sight.

After Shoemaker pulled slightly ahead and Dereere fell off the pace, Derobert started a kick that looked like it would take him to the top of the podium. Shoemaker, however, had other ideas and one final burst moved him past the Frenchman at the tape.

Coming into the event, Shoemaker was a darkhorse. He had a strong running resume, but having never raced a duathlon before, the jury was still out on whether he could hang with the duathlon specialists over the fast and technical course. He proved the doubters wrong.

“On the first run we decided to keep the tempo up high. I wanted to feel good. I didn’t want to push it too hard because I’ve never done this before,” said Shoemaker. “Then on the bike it was really technical, really tough. I crashed and thought my race was over then, but luckily a pack was right there and Paul Amey helped to pull me back up. I came off the bike and that’s it; you have to go as hard as you can go. These guys are great athletes. I knew Derobet would do a sprint. I saw him right next to me and I said ‘this is it’.”

Alessandro Fabian of Italy won the U23 men’s title, followed by Antoine Duvivier of Belgium and Tiago Silva of Portugal. 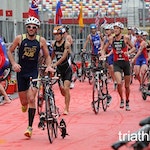 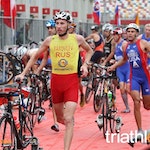 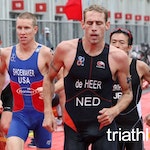 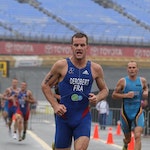 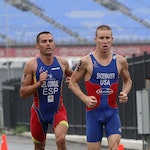 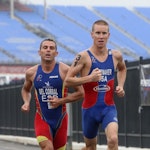 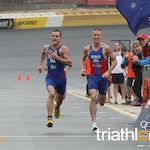 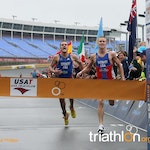 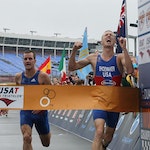 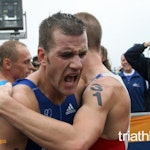 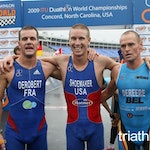 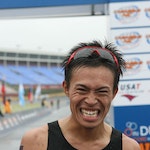