Japan scored big at the Asian Games at the Songdo Central Park Triathlon Venue in Incheon, South Korea on Thursday going 1-2 in both the men’s and women’s events for the second consecutive Asiad. China rounded out the top three in each race, marking the first time a Chinese man has made the Asian Games podium.

Women’s Review
Korea’s own A Reum Jo got the crowd riled up when she led the women’s race out of the two-lap swim with a 32-second gap over China’s Yuting Huang and Lianyuan Wang. The Japanese hung with the Chinese pair, as did four additional women for a chase group of eight.

The pack dwindled down to six on the 40km bike, meaning half the women would receive a medal while the other half would be left without any hardware. Jo kept the crowd cheering as one of the half dozen women riding out front, but her medal hopes ended on the 10km run.

A proven tough competitor in hot and humid conditions, Ai Ueda was too fast on two feet for the women. She quickly opened up an advantage that eventually grew to a 1:20 lead for the win in 2:01:47. Behind her a fierce four-way battle for two remaining medals was being fought out between Juri Ide (JPN), Wang, Huang and Long Hoi (MAC).

Despite a late surge from Wang that surpassed teammate Huang, the more experienced Ide was just able to hold of the approaching Chinese athlete off for silver in 2:03:07. Wang took bronze in 2:03:13, while Huang was fourth five seconds later and Hoi took fifth in 2:03:20.

Men’s Review
Yuichi Hosoda (JPN) doubled his Asiad gold medal count on Thursday when he won the men’s race, just as he did in 2010 in Guangzhou, China. A top swimmer, Hosoda headed up his hunt for another win in the swim tucked tightly into the lead pack of eight men.

With nobody willing to make a break on the six-lap bike, the group stuck together until the final four run laps. It was then Hosoda and teammate Hirokatsu Tayama took off and left the field with the exception of China’s Faquan Bai.

Hosoda had just a sliver more left in his legs over the pair to collect his second title in 1:49:11. In a last ditch effort, Tayama cemented his spot on the podium just 13 seconds later ahead of Bai. In one of his most impressive run and overall triathlon performances, Bai kept pace until the final laps, but it was enough to take third.

Triathlon action continues tomorrow in Incheon with the Mixed Relay. 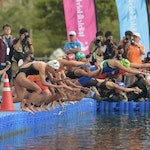 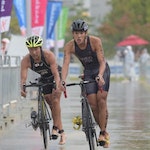 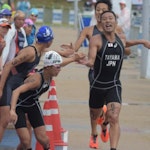 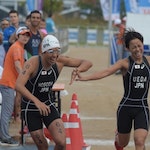 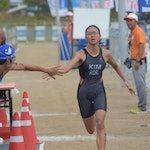 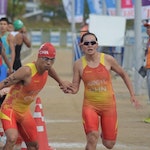 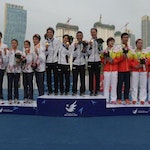 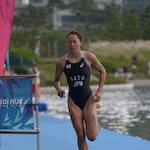 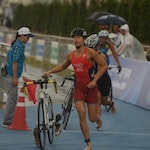 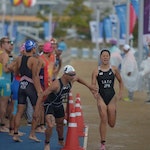 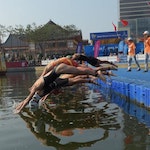 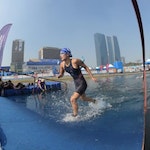