Jonathan Brownlee set the tone for Saturday’s TriathlonLIVE replay of his epic 2013 World Championship showdown with Javier Gomez at the World Triathlon Grand Final London, with the two legends of the sport sharing fascinating exchanges and honest reflections for the duration of one of the greatest battles the sport has seen.

Brownlee admitted to having never watched a full race back before, and that he knew that brother Alistair’s injury would almost certainly keep him out of challenging for the podium - and the World Championship he was leading going in - by the final stages of the run.

“Everyone thought it was a battle between me, Al and Javier,” Johnny began. “I knew Al wouldn’t feature. He had a sore calf and shouldn’t have really raced. He did a test run in a local park a couple of days before and he was still sore. I felt for him but also knew it was a chance for me to win.”

“So many great memories!” added Gomez. “Ask questions and i’ll try to give you some insight of what’s happening… If i still remember it!”

It was the same course as the London 2012 Olympic Games a year before, and the rain was coming down as they took to the start on the Serpentine Lake. This was how the two relived it all:

JB: “We had raced in London three times before this race. I had tried both sides (of the pontoon) but preferred the left because felt it was shorted. I like a side to avoid fighting other swimmers.”

The Brownlees’ training partner Richard Varga was as quick as ever in the water.

JB: “He is the fastest swimmer I have ever swum with,” said Johnny. “I never liked the swim in London because the first buoy is quite close (only 200 metres). So it can get quite rough.”

JG: It wasn’t my best swim, I had just come back from the US from Hy-Vee and didn’t feel that good at the beginning of the race.

JB: It is really hard to get information about time splits out the swim. I didn’t know Javi was a bit back until know. I always expect him to have a very good swim

JG: (It’s a) great bike course. Not as packed as the year before at the Olympics, but still awesome.

JG: I remember that Ali was leading the series before the Final, we all three were pretty close and I though it was going to be a battle of three of us for the title. 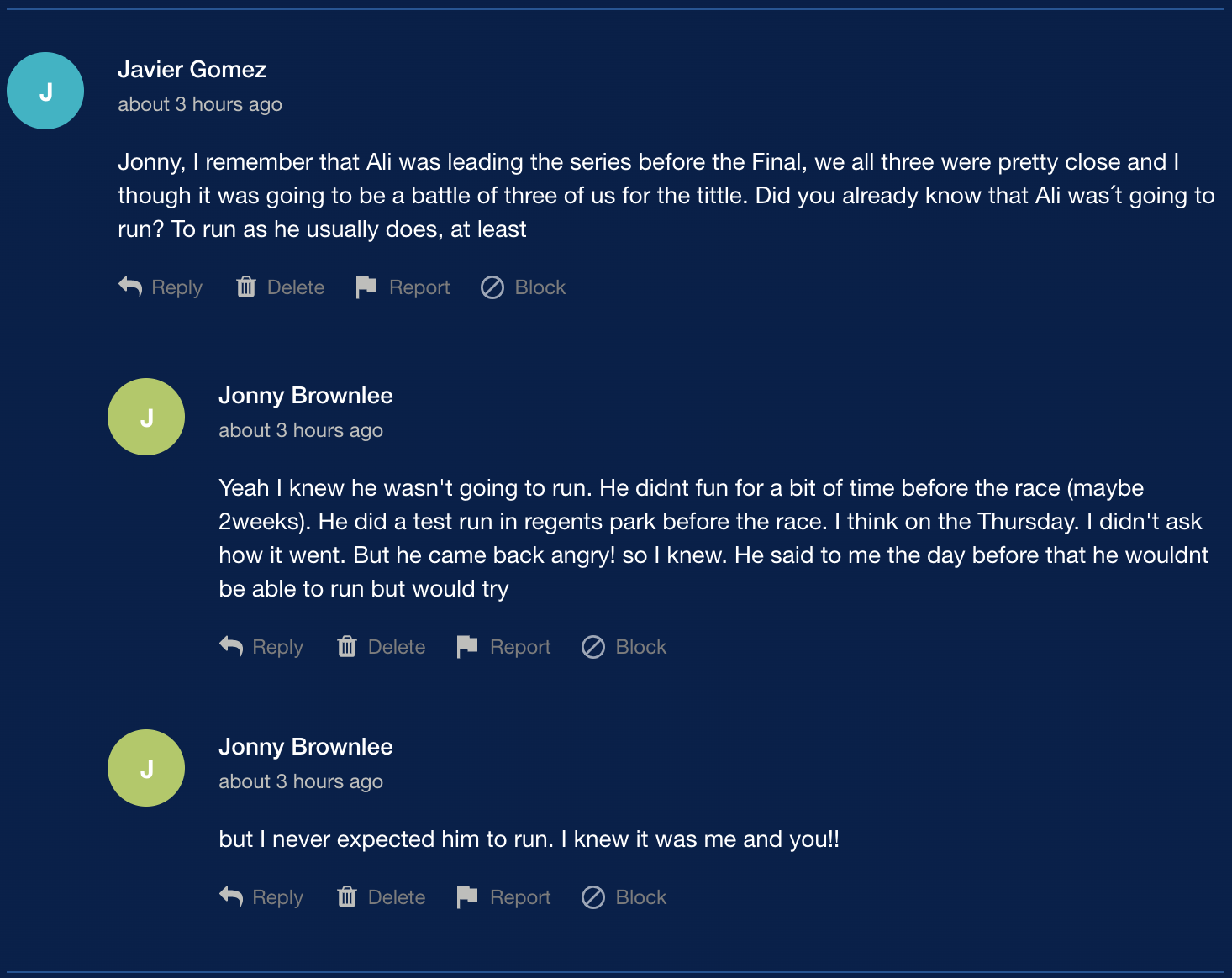 JB: Yeah I knew he wasn’t going to run. He did a test run in Regents Park before the race. I think on the Thursday. I didn’t ask how it went. But he came back angry! So I knew. He said to me the day before that he wouldn’t be able to run but would try. I knew Al wouldn’t run. So we were trying to make it hard for Javi!

JG: I was confident on my run and we were close to T2… I wasn’t going to burn all my energy chasing there.

JB: Al trying to make Javi chase again! Also he probably believed that he could still run well if he had a small gap. He is always so brave.

JB: I felt quite good. I had a good swim, a bike that was quite smooth and not too many sprints. So I was ready to run fast. I had been at altitude in St Moritz about 1 month ago.

JG: It’s a pretty easy T2, the last 800m on the bike are straight and wide so not so stressful and easier to get a better position. Although everyone still wants to be in a good position

As brother Alistair got off the bike into T2, the pain was clear and his challenge quickly faded.

JB: Al is in trouble now. I remember running past him and knowing he wouldn’t run. A bit of me hoped he would. But now I knew very quickly this came down to me and Javi. I took a deep breath and said here we go!!

JG: There is where i realised Alistair was out of the race, so the maths became way more simple. The winner between Jonny and I would be the World Champion

JB: I was confident of my form in this race. Probably too confident. I have been tactically stupid so far. Letting Javi just sit behind me on the run.

JG: Man, my diesel engine needs some time to warm up, don’t start that fast!

JB: I made a big mistake.  I was. going to say why later but I blame it on Bekele. The morning before the race I had watched the great North Run sprint between Bekele and Mo Farah. Bekele went early and won I thought I could do the same.

JB: I needed to commit more instead of just running on the front. Javi is the hardest competitor I have ever raced. He doesn’t have a weakness and is so tough. He is always hard to beat

JG: Thanks mate. I’ve always said you two have always been the toughest rivals I’ve ever had. Those 2009-2016 years were epic!

At the halfway point of the run, the splits showed Mario Mola was the only possible threat, and even he had too much ground to make up to cause too much trouble to the leaders.

JB: I think by this point I knew that it would come to a sprint between us two. I could just feel it. We were too close in fitness. Javi covered everything that I tried

JG: At that point I was´t feeling that good anymore, i tried to change the pace a couple of times as i didn’t want a sprint finish, but I just couldn’t drop Jonnny off. And I started to think of the sprint and analyze those last few hundred meters. I remember we had head wind so the sprint it was going to feel very long.

That was when Jonny Brownlee started to think about one last roll of the dice, only for Javier Gomez to dig in again as they hit the blue carpet.

JG: There I wanted Jonny to start the sprint as it was going to feel long. So hopefully I could shelter from the wind a bit and then try to pass him closer to the line.

JB: I was in the right position now. I should have stayed there  Why did I go now!!???

JG: I thought I had the sprint on the blue carpet

Over the final 50m Javier hung tough right to the line, taking the 2013 World title in the most dramatic fashion. Gomez and Brownlee had one last exchange before wrapping up a brilliant reLIVE

JB: My first thought was ‘Al is going to kill me’. Well done Javi!! Hope we can have another one again soon!

JG: That was intense! I don’t win many sprint finishes so I really enjoyed it. Jonny is tough as nails and he was the world champion of 2012. So it was incredible to win that race and the title.

JG: Thanks everyone for watching, it’s been great to relive that one.

And there it was. Two of the absolute greats, one in Leeds, one in Galicia, showcasing the very best of the triathlon and watching and chatting along with several thousand fans as they reminisced over a magnificent London 2013 Grand Final.

—
Next up… Vicky Holland and Ashleigh Gentle reLIVE the thrills and spills of the 2018 World Triathlon Grand Final Gold Coast, along with a few special guests! Tune in from 12 noon CEST Sunday 26 April .