It was a day of firsts at the 2016 Salinas ITU World Cup as USA’s Kirsten Kasper and Spaniard David Castro Fajardo captured their very first World Cup titles in the debut event in Ecuador on Sunday.

Kasper said of her win, “Words can’t describe how excited I am. I know Summer well from college, she ran for Villanova and I ran for Georgetown so we were big rivals. So I knew that if we just worked together and work off of each other we would do well. To get away from her I was just trying to listen to my body and know where I was. I obviously can’t control what she was doing, so I just try and focus on myself. I was feeling strong in the final lap, so I thought I would take over and push through to the finish.”

Taking the silver medal, Kasper was joined by Cook, grabbing her second World Cup podium of the year, while the bronze was earned by South Africa’s Gillian Sanders, who also recorded a career first by stepping onto her first World Cup podium.

Charging out of the ocean, Mari Rabie (RSA) with Canadian Dominika Jamnicky and Aussie Emma Jackson managed to get the slight edge from the swim and led into the first transition, but the gap was only slightly as the rest of the field were only seconds behind.

While the sprint only offering up four short laps, a small pack of women found their moment to get ahead of the others and ride as the leaders. Training partners Rabie and Lisa Norden (SWE) were the frontrunners, creating the split after every lap. But while the group of nine women were not threatened by the trailing chase pack led by Ecuador’s Elizabeth Bravo because they were over a minute down, the strength of runners that were included in the leading nine did mean that someone was going to have to make a breakaway. Kasper, Cook, Sanders, Jamnicky, Jackson, Michelle Filpo (FRA) and Vanessa De La Torre (MEX) followed Rabie and Norden into the second transition looking forward to the two-lap five kilometre run.

It took no time for Kasper and Cook to separate themselves as the front two women. Gaining space from the rest of the women they cycled with, after one lap they had secured their spots as the gold and silver.

The battle for bronze then came down to a small bunch who had formed in the first 2.5km. Sanders, Rabie, Norden and De La Torre became a foursome, running side by side until the finish.

Cook then followed just seven seconds behind to claim the silver and snag her second World Cup podium of the year.

Sanders then was awarded with the bronze, after broke away from her pack in the final lap, a move that would grant her a first-time World Cup podium for her career.

Men’s Review
The men’s race was a battle of surviving the masses as Spain’s Castro won the very first Salinas World Cup crown in a sprint finish, securing his second World Cup podium of the year and his first career gold.

“I am very happy. I can’t believe this, it really is unbelievable. This was a sprint distance and in the last kilometres myself and Cristanto (Grajales) attacked the field and I just am very happy with gold,” said Castro of his first victory.

The silver then went to another first-timer – USA’s Matthew Mcelroy, who took second in the sprint battle just ahead of Mexico’s Crisanto Grajales who claimed bronze.

Starting the day out with a beach start, the men entered the ocean water to close out the debut World Cup race for Ecuador.

Despite the possibility of the beach start causing some separations in the water, the short distance took away any advantages as the men exited the swim.

Germany’s Maximillian Schwetz was the swim leader, but the role was short-lived as he was followed by the entire men’s field into the first transition.

The busyness on the course did not let down. With only four laps on the bike, no one attempted a breakaway and for 20 kilometres, a string of over 30 men rode as a train, looping around the streets of Salinas.

The only hope for distinction would be on the run. Almost the whole field once again entered the transition zone together and those who got out of the madness first were the ones who put up some space on the pavement.

After the first lap, eight men came out on top. Igor Polyanskiy (RUS), Dmitry Polyanskiy (RUS), Grajales, Mcelroy, Castro, Antonio Serrat Seoane (ESP), Leo Bergere (FRA) and Feliz Duchampt (FRA) created the lead group and had no contest of any chasers behind them.

It wasn’t until the final kilometres where the men started to realize there would only be three spots on the podium. Castro, Grajales, Mcelroy and Duchampt pulled ahead at the end, but it was Castro who had the legs and pushed his way to a sprint finish to claim the crown. 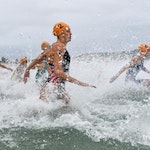 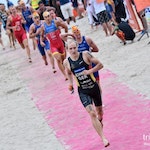 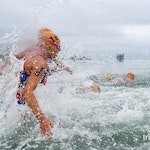 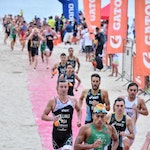 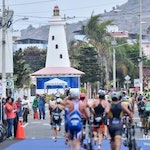 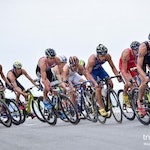 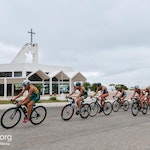 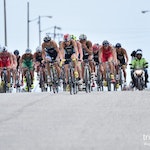 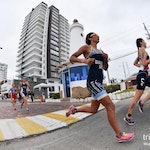 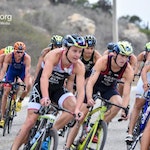 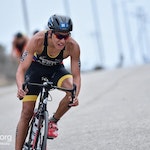 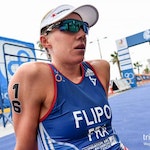