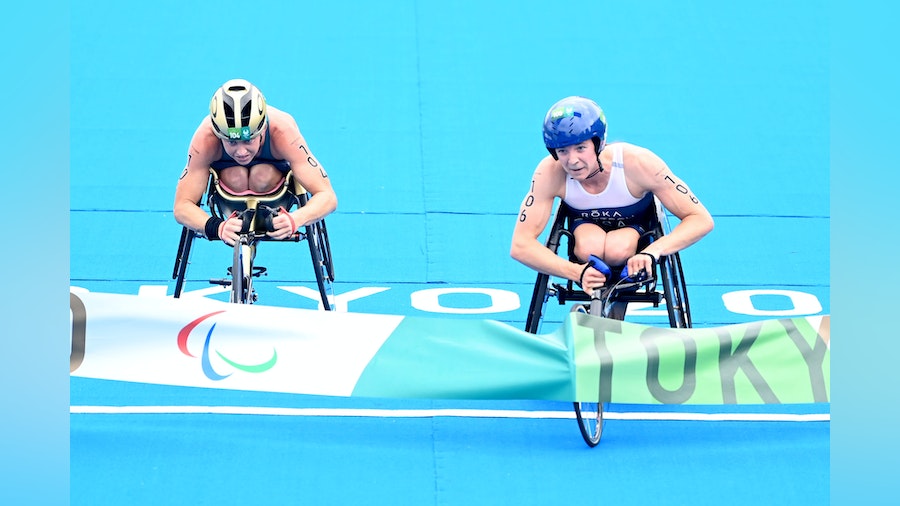 Less than a second. That is the difference, the blink of an eye, between gold and silver in the Paralympic debut of the Women’s PTWC class. American Kendall Gretsch timed her move to perfection to steal gold from Australian Lauren Parker, who led the race from the start to less than two seconds to finish, right at the finish line. Spaniard Eva Maria Moral Pedrero crossed the line in third place to grab a precious Paralympic bronze medal.

If the sprint finish that gave Swiss triathlete Nicola Spirig the gold medal in London 2012 Olympics was a boost for female triathlon around the world, what Gretsch did in the blue carpet on a hot and humid morning in Odaiba Bay will do more for the visibility of para triathlon that nothing has ever done before. But the morning started quite differently.

In fact, the morning started with Lauren Parker taking the lead of the 10 women field from the first strokes of the swim. A lead that she maintained in the 750m swim in the warm waters of Odaiba Parker to enter the first transition with over 40 seconds with the chasers, and leave in style with an impressively fast transition.

Behind her, Margret Ijdema (NED) and Eva Maria Moral Pedrero mounted their handbikes almost together, while Gretsch was still almost two minutes behind. Over the 20km of the bike circuit, Parker showed magnificent skills and opened a bridge that looked impossible to close, while the American did an impressive first lap on the handbike to move to second place, with Idjema, Moral and Mona Francis (FRA) right on her heels.

When it came to the second transition, Parker showed the first signs of weakness, losing almost one minute on a slow transition that proved to be vital. Behind her, Gretsch flew while moving from her handbike to the racing wheelchair and left T2 only a minute and a half behind the Aussie. Behind the two leaders, Ijdema, Moral and Mona Francis were fighting for the remaining spot on the podium. And it was the Spaniard who, with two laps to go, did a final move to leave the others behind, never looking back.

Parker managed to stay in the lead, seeing the American closer and closer after each lap, but still the young Aussie managed to enter the blue carpet for the fourth and last time in the lead, but with the American right on her heels. And in front of the almost empty grandstands, with just 100 meters to go, it was when Gretsch made her final and decisive move, and found one extra gear to just pass Paker a meter before the finish tape. Eva Moral, all smiles, finished more than eight minutes behind the two leaders but her powerful run was worth a bronze medal.

“I knew it was going to be such a close race, so that finish is something I have been training for with my coach and my team this entire extra year”, said a delighted Gretsch, World Champion in 2018. “I couldn’t see Lauren in front of me until the very last lap of the run. Even halfway through that (last) lap I couldn’t see her. But as soon as I saw her, I was like, ‘hey, you just have to do it’. You have to give everything you can. On that final stretch I just put my head down and that was all I could do”, said the American, who won also two gold medals in Nordic skiing at the PyeongChang 2018 Paralympic Winter Games.

Parker, current World Champion and dominant all season, said: “I had a great swim, the best swim I have ever had. I felt awesome in the water. I got on to the bike, which is my strongest event. It’s actually a tough bike course with some hills which really hurt the arms (on the hand bike). But I just went hard from start to finish on that bike to get as big a lead as I could for the run (wheelchair race). I knew I had to pull my head down on that finish line. It wasn’t to be for the gold but I am proud of my silver. The competition today was amazing. Every woman out there went through her own obstacles over the last year. I am so proud to be able to race them. To get a Paralympic Games silver medal out here in Tokyo makes me proud.”

“I still don’t believe it.I dreamt about this moment a lot of times, and now it happened. It’s incredible. I don’t have words for it. I knew the American and Australian girls were really strong, but I knew I could do well and achieve the bronze and that is a reality now. The medal gives me the opportunity to try and continue (for Paris 2024). I will keep on training a lot, will live for the sport. It’s my passion” said bronze medallist, Moral.