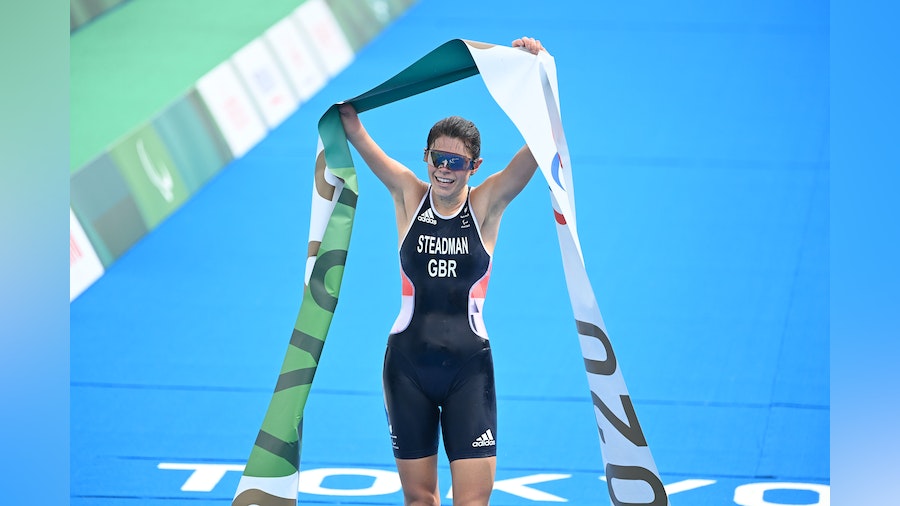 British para triathlon super star Lauren Steadman nailed it in Odaiba Bay on Paralympic Super Sunday to claim the victory in the Women’s PTS5 race, an event that saw American Grace Norman finishing in the silver medal position, while another Brit, Claire Chasmore, managed to maintain the third place after a complicated race in which she had to serve various penalties.

In Tokyo Bay ten of the best para triathletes in the women’s PTS5 class got officially underway with their race at the Paralympic Games. Paralympic champion Grace Norman of the USA had a superb swim to lead the women out into the first transition of the day. Renowned swim specialist Claire Cashmore of Great Britain was next through transition, closely followed by Lauren Steadman and Canada’s Kamylle Frenette.

The sprint distance race, consisting of a single 750m lap of the Bay was followed by four 5km laps of a flat and technical bike course towards Ariake Tennis Park then heading north over Fujimi Bridge and doubling back towards Odaiba. The final run segment featured 4 laps of 1.25km, finishing in front of the grandstands on Odaiba Bay.

In the early stage of the bike segment, Norman of the USA had established an 11-second lead on the PTS5 women but there was no surprises that Steadman, who had earned the silver medal in Rio 2016, would be up for a battle and by lap three had taken the lead.

The two women have raced on the para triathlon circuit for years and familiar with each others strategies out on course and the familiar battle for medals, especially on the Paralympic stage after Rio 2016.

During the bike, experienced para triathlete Cashmore made an unfortunate error on course and was penalised on course, forcing her to lose 1-minute in the penalty box.

Steadman and Norman entered the final transition of the day within seconds of each other but it was Steadman who produced a quick change to move onto the run course as race leader.

The British Paralympian Steadman was a force to be reckoned with on the run, showing the audience that she was highly motivated to achieve one better than in Rio, and make that step onto the top step of the Paralympic podium.

Norman ran exceptionally across the entire 5-kilometre course with Cashmore chasing, but didn’t quite have the power of the front runners today.

“I went in and I really had no idea how it was going to go.The standard in my category is fantastic. Grace Norman could have taken it, Claire Cashmore could have. The cards were going to fall one way or the other. Today they fell my way. After Rio (2016) I was devastated, and I really withdrew from sport. It was a horrible experience for me (back then). I don’t think it has quite sunk in yet, I feel quite teary. I can’t believe I did it. I am over the moon.”

Grace Norman crossed the finish line with the silver medal and graciously congratulated Steadman on her gold medal performance. Norman led the field with a remarkable swim and for a portion of the bike segment but honoured that the gold was for the taking today.

“Throughout the race it was just a phenomenal experience. I felt good warming up. I took the swim by storm, had an amazing lead. I did all I could on the run. It was hot, but all in all I am very proud of this second place.”

“It’s incredible. Rio was surreal, Tokyo proved nonetheless. It was five long years to get here. We went through a lot of hard work, blood, sweat and tears. I just can’t explain it right now, I am just very happy.”

Cashmore, despite serving time for a penalty, had a brilliant run to claim Paralympic bronze in Tokyo.

“It is huge, but I think there was more in me, more in the tank. But a bronze medal at the Paralympic Games is something to be definitely proud of. I’ve got to take that. Lauren Steadman fully deserves that gold, she has done an incredible year of training. And Grace Norman as well. Both came back from Rio 2016 and they are massive role models to me. It was incredible to see those two with me on the podium.”

The women’s PTS5 event closed the extraordinary Para Triathlon competition, at the Paralympic Games at Tokyo 2020.