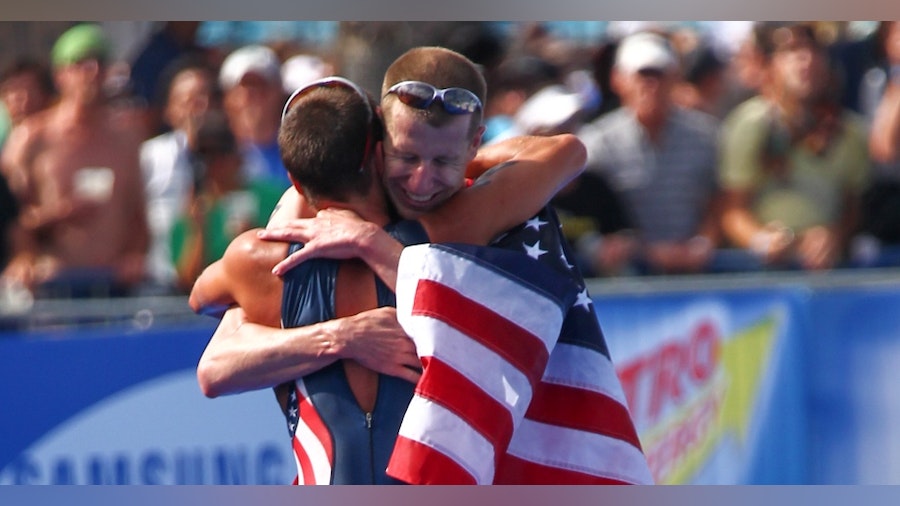 The two-year ITU Olympic Qualification Period is almost at an end after the penultimate race in the city where triathlon was invented. The ITU World Triathlon San Diego held plenty of hopes and dreams, some were realised, some were not. Here is the updated Olympic simulation, which is a guide to what the London field what look like if qualification finished tomorrow, and an early look at the Madrid round of the ITU World Triathlon Series. As the final automatic qualification event for USA Triathlon, a key focus was on who would join Gwen Jorgensen and Sarah Groff in London. The top contenders were Laura Bennett and Sarah Haskins, who both represented the USA in Beijing and that battle was on right from the start. Both are strong swimmers and both emerged within a lead group of eight that included Helen Jenkins and Erin Densham. While Haskins tried a few times to break off the front in the bike, she didn’t, and they came in T2 together. Bennett flew through in 20 seconds, while Haskins took 28, and that ended-up being a defining moment. While Haskins did almost catch Bennett in the run, the 37-year-old pulled away and went on to bronze – her first series medal and her second Olympic team.

In other individual selection news, Netherlands’ Rachel Klamer met her national federation’s qualification criteria with a 12th place finish. This acted as a confirmation result for her early pre-selection in 2011. Maaike Caelers also put herself into contention with 11th, enough to move herself onto the Olympic simulation. Lisa Mensink had held down a second place for the Netherlands, but her day finished early with a crash leaving T1. That crash also ended her own hopes of competing in London, she sustained a fractured shoulder, however Caelers result was enough to keep the Netherlands with two spots for now.

In other important results, Lydia Waldmuller moved Austria into the picture, taking over the European new flag spot from Finland’s Kaisa Lehtonen, while Hungary moved from two places to one. A week after collapsing before the finish line in Huatulco, Vendula Frintova recovered and put the Czech Rebublic back in with a chance to send two women. So far Frintova and Radka Vodickova hold down those two places. Claudia Rivas also met the Mexican Triathlon Federation’s qualification criteria to confirm her place in London. The competition to see who can field the maximum three athletes in London didn’t change after San Diego, except for Marina Damlaimcourt gaining more points on New Zealand’s third athlete Debbie Tanner – who was one of three athletes who pulled out from the early crash. That sees Spain now 100 points clear of New Zealand in seventh. The final NOC who can send three athletes is still Germany, even though Kathrin Muller - it’s third ranked athlete – did not race. As Switzerland’s Daniela Ryf did not finish, she didn’t make up any ground which means Switzerland still have just two places. Speaking of Germany, Anne Haug‘s seventh place - including the second-fastest run split - did her own ambitions no harm. So far, only Anja Dittmer has been selected for the German team, but Haug is now in the mix alongside Muller and Bazlen.

Elite Men’s Olympic Qualification
While the New Zealand men’s team looked fairly certain to send three men to London before San Diego, their newly named three-man Olympic team all finished in the top-10, which has pretty much secured it. Ryan Sissons claimed sixth, his best series result, Bevan Docherty eighth and Kris Gemmell 10th to move New Zealand from sixth place to third, only behind Great Britain and Germany. They are followed by France, Spain and Russia, and now Australia and Canada sitting in places seven and eight, as Portugal dropped down to just two men’s spots.

Before San Diego, Joao Pereira had Portugal sitting in seventh place, ahead of Australia in eighth and Canada in ninth respectively. Given Australia’s third athlete Courtney Atkinson and Canada’s third athlete Simon Whitfield were separated by just 64 points, it set up a tussell between two of the sports veterans. That ensued in the race, as Whitfield just pipped Atkinson in 11th place to 13th, but what happened behind them actually had more impact on the results. Pereira finished 47th, which meant Whitfield and Atkinson moved ahead for the time being, while Brent McMahon finished in 29th place. That means it’s now McMahon as Canada’s third athlete, and while he has more points than Pereira, 149 to be exact, and that moved Canada to eighth place, it now means it’s likely to come down to a battle between McMahon and Pereira as to which NOC can send three men to London 2012. However, Atkinson and Australia’s three chances are still not safe either, Atkinson is just 10 points ahead of Whitfield and 140 poins ahead of McMahon. It’s all going to come down to the wire in Madrid, as Australia, Canada and Portugal fight for the chance to send three men to the Olympic Games. Just as in the women’s race, the USA Olympic men’s qualification race within a race was captivating. On paper, the main contenders were Jarrod Shoemaker and Matt Chrabot, whose results over the past two years meant they were the two top-ranked USA men, but there was also three-time Olympian Hunter Kemper and Pan Am Games silver medallist Manuel Huerta. After Chrabot was part of an initial break that came back to the chase in three laps, it was clear this would also be decided on the run. There, Kemper and Huerta shone. At one stage, Huerta was in fifth and Kemper in 12th, before an incredible last lap surge saw Kemper run into fifth – and his fourth Olympic team – and Huerta claim ninth and his first Olympic berth..

In the other individual results, Peter Croes just held onto two places for Belgium by finishing ahead of Argentina’s Gonzalo Raul Tellechea. However, Tellechea still holds onto his Americas new flag position. Crisanto Grajales also met the Mexican Triathlon Federation’s qualification criteria to confirm his place in London.

The ITU’s two-year Olympic Qualification period comes to an end on May 31st, which means that the 2012 Madrid World Triathlon is the final race that will count towards shaping the London 2012 women’s and men’s fields.