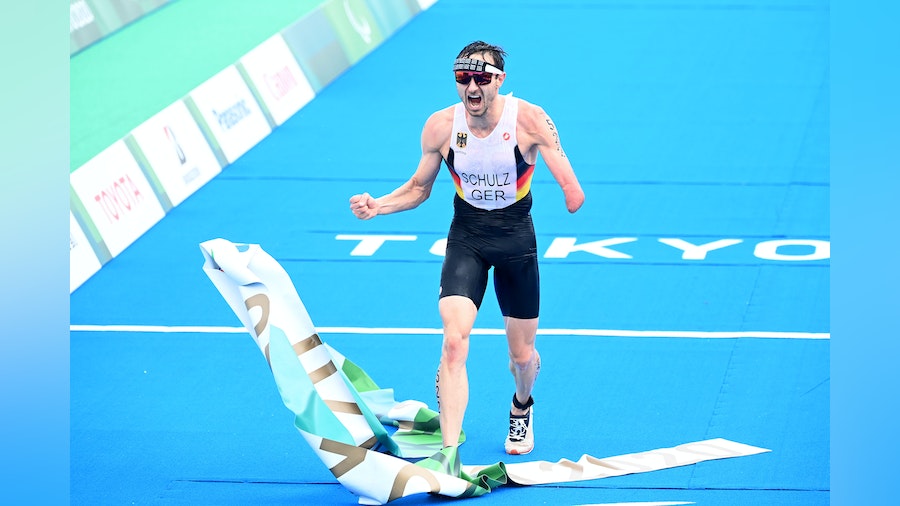 German Paralympian Martin Schulz produced the run of his life to earn the victory in the Men’s PTS5 race at the Tokyo 2020 Paralympic Games, the same medal that he got five years ago in Rio 2016. Along with him on the podium was British para triathlete George Peasgood, and Rio silver medallist Stefan Daniel.

The sprint distance race, consisting of a single 750m lap of the Bay was followed by four 5km laps of a flat and technical bike course towards Ariake Tennis Park then heading north over Fujimi Bridge and doubling back towards Odaiba. The final run segment featured 4 laps of 1.25km, finishing in front of the grandstands on Odaiba Bay.

After the first lap of the bike segment, Peasgood was powering ahead, with a 34-second lead to Schulz, who was sitting in second. Stefan Daniel of Canada chasing in 3rd.

Great Britain’s Peasgood headed out of the final transition of the day in top position and out onto the 5km run segment but there was no doubt that he was well aware that the force of Schulz was within striking distance. Stefan was showing a mighty performance, on the hunt in third on course. Chris Hammer of the USA and Brazil’s Ronan Cordeiro jostled for positions in fourth and fifth place.

2016 Paralympic champion Shulz made his move on the second lap of the run to take charge of the men’s race in Tokyo. The German para triathlete is renowned for his striking run segment and he was making an impact on the field and there was no looking back.

Peasgood, who had led majority of the race dropped back into second but still looked strong and in control of his position. At the this final stage of the race, Canada’s Daniel, who secured the silver medal at the 2016 Rio Paralympic Games, was bronze medal at Tokyo 2020 but didn’t quite have the legs to chase down the front men, despite displaying incredible form out on the run course.

On the final lap of the run, there was no backing down for Shulz and just as he did in Rio 2016, he came flying down the finish chute, completely immersed in the moment, as he earned the Tokyo 2020 Paralympic Para Triathlon champion title, in the men’s PTS5 event.

“It feels amazing. After Rio, not everything worked well. But this was my goal. I worked every day for this. This is what I expected from myself and what others expected from me. After the second lap in the run I knew I could do this again.”

“I pushed for it from the very first metres in the swim. I was very happy I could compete with the first group in the swim, since I have been struggling with swimming previously. Thanks to my swimming coach I have improved over the last two years. That has helped me a lot today.

“My bike was really good as well. The first lap in the run wasn’t that great, but then I managed to get better. It was a bit of a runner’s high, I think.”

A brilliant performance saw Great Britain’s George Peasgood crossed the Paralympic Games to earn a remarkable silver medal, elated with the result at the highest level of para triathlon.

“I am absolutely over the moon. Getting here was a medal in its own ride. Over the last couple of months I have had proper low moments and times. To get here was an absolute privilege. And it’s the Paralympics, I mean it’s the best of the best.”

“To come away with a medal has not sunk in, and it probably won’t for a while. It’s just absolutely amazing. I was coming to this in good form.”

“It was just all about holding on to the run, and he came past me. I tried to just give it everything, and it was just a matter of holding it to the finish line and get that silver.”

Canada’s Daniel put on a great show to cap the men’s Paralympic podium with a brave bronze.

“Overall I probably had a much better race than in Rio and I came away with a worse result. It just shows the sport and the athletes grows every year. I am gutted right now, as I wanted more. But I gave everything I had today, so I have to be proud.”

“I think I can grow from this. I know it wasn’t the result that I wanted, maybe it wasn’t my best race, but I fought as hard as I could.

“Right now it hurts, it’s tough, but I will be proud of it eventually. This will definitely keep motivating me. I know exactly where I can improve. Paris (2024 Paralympic Games) will be coming quick, so I will prepare and reset for that. I really tried to stay within myself, tried to manage the heat. The heat is the real deal here. That was definitely a factor, and everyone was definitely suffering out there.”

The women’s PTS5 race followed on the schedule, to close the Para Triathlon competition at the Tokyo 2020 Paralympic Games.