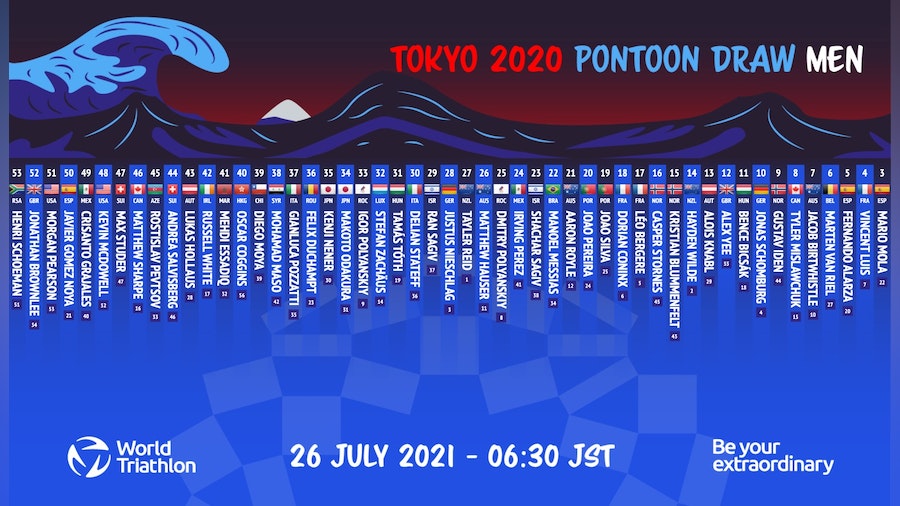 Following the second day of training and familiarisations ahead of Monday’s men’s Olympic Triathlon (06:30am local time), the draw was made for their pontoon positions on the start line. The possibility of choosing the straightest line to the first buoy, or starting alongside some of the strongest swimmers in the field, is the first strategic moment ahead of the race, and revealed some interesting preliminary stories before the hunt to emerge from the water in the front pack.

Positions were chosen in order of the athletes’ current Olympic ranking, only the first ten choosing their position anonymously, the rest of the field’s slots being updated live for the briefing room to see. Once all the athletes had chosen, the first ten were then revealed.

The two top-ranked athletes and training partners Mario Mola (ESP) and Vincent Luis (FRA) chose the two spots furthest into the bay, while renowned swimmer Henri Schoeman (RSA), Jonathan Brownlee (GBR), Morgan Pearson (USA) and Javier Gomez Noya (ESP) will occupy the first four positions nearest the transition. Along with the Polyanskiy brothers, who put themselves in the middle of the pontoon, Brownlee and Schoeman were two of the fastest over the 1.5km swim at Rio 2016.

For information on how to watch the race, click here.