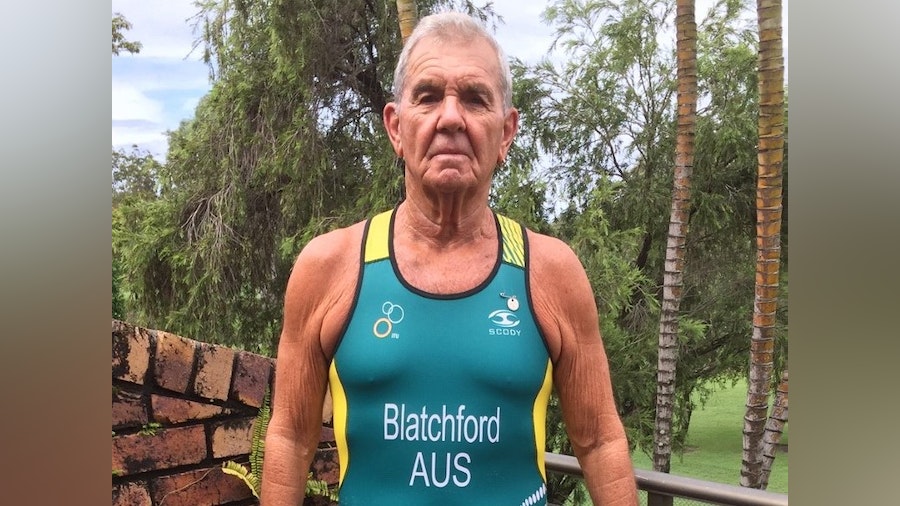 At 78, Loch Blatchford, from Tweed Heads, Queensland, Australia, is an unconventional triathlon legend and an inspiration to everyone getting along in years that is struggling for motivation to keep the joints moving.

A multiple Australian Champion over the standard distance and a Long Course champion as well, Loch has been putting in the hard yards in preparation for this latest assault on the Mooloolaba Triathlon, ultimately representing Australia in Townsville at the 2021 ITU World Triathlon Multisport Championships and fulfilling his desire to one day be the oldest triathlete in the world.

“I’ve won a few Australian age group titles at Mooloolaba and the Australian Long Course at Goondiwindi and while others are faster and fitter, they don’t always turn up,’ he laughed. “I try to fit marathons and ocean swims into my triathlon program. I have done six marathons and won my age group in the Pan Pacs 5km Open Water Swim a couple of years ago.”

“I train myself and by myself. I enjoy the freedom and have found specialist swim and run clubs unsuitable. I assume tri clubs are different, but oldies needs are also different, so I train when and how it suits me. I never ride on the road and only race on closed courses. Currently I do a three-hour hilly, walk/run on Sunday, 45 minutes of weights on Monday and I have the day off Tuesday. I do a three-hour stationary bike ride Wednesday, which includes two bike classes, take the day off Thursday, three kilometre morning swim Friday and 45 minutes of weights in the afternoon. Then Saturday is off.”

“My times are getting slower and recovery takes longer and I no longer push through training sessions. If I feel mentally or physically too tired to continue, I stop. I train less. I do weight training every week and stretch the whole body every morning. I train for one week and halve the volume the following week. I could train hard for two weeks but I would then need an extended recovery so it is better to have a one hard/one easy approach.”

“Although Mooloolaba is nearly upon me, I am currently training for the 2021 World Long Course, which is three times the length of Mooloolaba. Consequently, my times may suffer but that is the sacrifice I need to make to be ready for the Worlds in 2021.”

“I can’t afford to race overseas and my GIANT bike was built late last century. So what? Suck it up sunshine, you play the hand you are dealt. My bike shop says to forget the new bike keep working on the engine,” he declared.

Loch wasn’t always the current lean mean racing machine, 27 years ago as a youngster of 51, he fronted up for his first triathlon weighing in at 110kgs.

“My first race was a sprint race and it was memorable for a number of reasons. I weighed 110kg, owned a rusty, 3-speed Raleigh bike and had not exercised for many years. My hobby was drinking and I was good at it,” he said.

“I arrived late and everyone had already walked to the swim start. I didn’t know where to put my gear and no one was around to advise me. I spied some flashy bikes and pointy helmets off to the side and so I decided to join them.”

“This was the early days of triathlon and bike racks weren’t as sophisticated as today. These bikes dangled off one-inch water pipes wired to star pickets. OK for anorexic tri-bikes but unsuited to my sturdy Raleigh. The wire broke, one end of the pipe hit the ground and the bikes slid downhill to rest in an untidy heap at my feet. Water bottles, sunglasses and pointy helmets tried to escape but many were trapped in the debris. I wish I could have hung around to watch the pros sort that lot out, but I had to get to the swim start.”

“I had no problems with the swim but I wasted some time in transition cleaning the sand from between my toes and pulling my socks over wet feet. The bike course was hilly and too much for a Sumo on a three-speed. I dismounted and trudged uphill acknowledging the commiserations of those who thought I’d had a mechanical breakdown. It wasn’t the bike. It was the engine that was stuffed,” Loch laughed.

It was a very direct medical check up that inspired Loch’s change of lifestyle and kick started an amazing sporting journey.

“Things started to improve once my liver gave up,” Loch declared. “I have high cholesterol and after my annual blood test the Doc called me in and said I had a fatty liver. No big deal, the rest of me was fatty so why not the liver. I was told no grog for two years and then no more than two glasses of low alcohol a day. I haven’t had a drink since that day – 25 years ago.”

Apparently, the competition in Loch’s 75 plus age-group can occasionally be ruthless and unethical but he refuses to lower his standards.

“I have no time for cheats – drugs or otherwise. I can understand the temptation when money is at stake but cheats are flawed people. I have been targeted by a cheat and although my results were affected, I feel sad for the misfit who felt so insecure that he had to cheat at age 75+. It was a national race and when I completed the bike leg my run shoes were missing. I eventually located one shoe five metres away in the same row. The other was three metres in the other direction in a different row. Hope the bastard tripped and face planted into a pile of doggy-do,” he smiled.