by Lisa Pringle on 21 Mar, 2015 10:02 • Español
A World Cup win has always eluded South Africa's Richard Murray, but a perfectly executed performance at the ITU World Cup in New Plymouth delivered that for him. It's been a good start...

A World Cup win has always eluded South Africa’s Richard Murray, but a perfectly executed performance at the ITU World Cup in New Plymouth delivered that for him.

It’s been a good start to the year for Murray after a third place at the WTS Abu Dhabi event and now a convincing win over a credentialed field in a dramatic finish.

In a race that was at full throttle speed from the gun Murray made sure he remained at the front of the lead group on the bike to avoid trouble in the slippery conditions. Not even a 10sec transition penalty he served impeded his win in a slick time of 52:38.

“It was quite an interesting event today I came in and had a few wetsuit issues beforehand. One of the wildest first buoys I’ve been around.

“I was a bit under pressure running out of transition – I forgot my helmet then I realised they said I had ten second penalty,” said Murray.

In a sprint finish for second it was Russia’s Alexander Bryukhankov who got the better of 21-year-old Kristian Blummenfelt (NOR).

The rain had cleared but cool and windy conditions threw up a choppy swim, which suited Tommy Zaferes (USA) who took full advantage of a small shore break wave to led out the 75-strong field.

Caution was required on this tight and slippery course today and the 37 strong lead group stayed attentive the entire 20km. For the most part it was Philip Graves (GBR) driving the group each time they came through transition. Graves comes into ITU racing after a background in distance events and certainly dictated terms at the front.

Murray and Bryukhankov remained vigilant and in touch to put themselves in a good position coming into the last transition.

It was Murray to led the charge but in his haste dropped his helmet and incurred a 10 second penalty. Realising his mistake he laid down the pace and cleared out immediately to make up the time.

“I knew I needed to be near the front of the bike to get as much of a margin as I could going out,” said Murray.

On the final lap he had built the buffer he needed – served the penalty and had plenty of time to still celebrate his first World Cup win down the finish line.

“I thought on the first lap maybe depending on the gap I’d stop but to me it’s more difficult then. I gave it the gas and on the last lap I thought it wouldn’t be as stressful as I was getting the splits,” said Murray

After a two-year hiatus from the podium Alexander Bryukhankov (RUS) made sure he was at the head of the field all day, putting himself in contention and producing the form we know he is capable of to grab silver.

“I am very happy, this is my first podium after two years. This race was very hard for me to fly 30 hours. Maybe next race in Auckland will be good for me.

“I felt very strong on the run,” said Bryukhankov.

An impressive performance from the Norwegian Sprint National Champion, Kristian Blummenfelt to claim bronze in a close finish with Bryukhankov after a disappointing outing in Mooloolaba last weekend when he finished 18th.

“It was great, much better than last weekend. It was great to finally get a podium.

“Then on the bike on the first lap I tried to make a break happen and I worked really hard but didn’t happen. So I just saved my legs for the run,” said Blummenfelt. 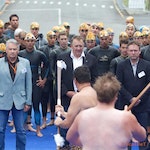 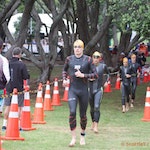 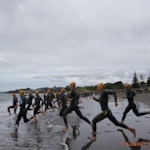 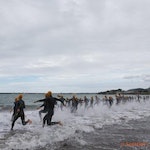 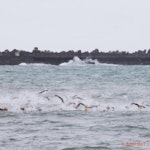 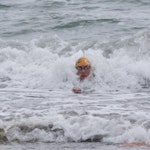 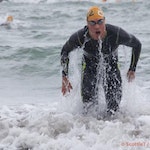 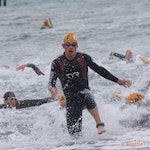 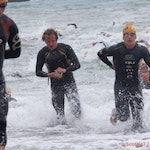 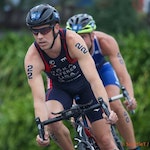 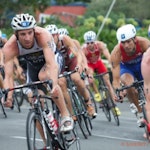 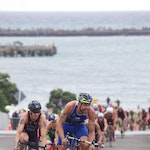