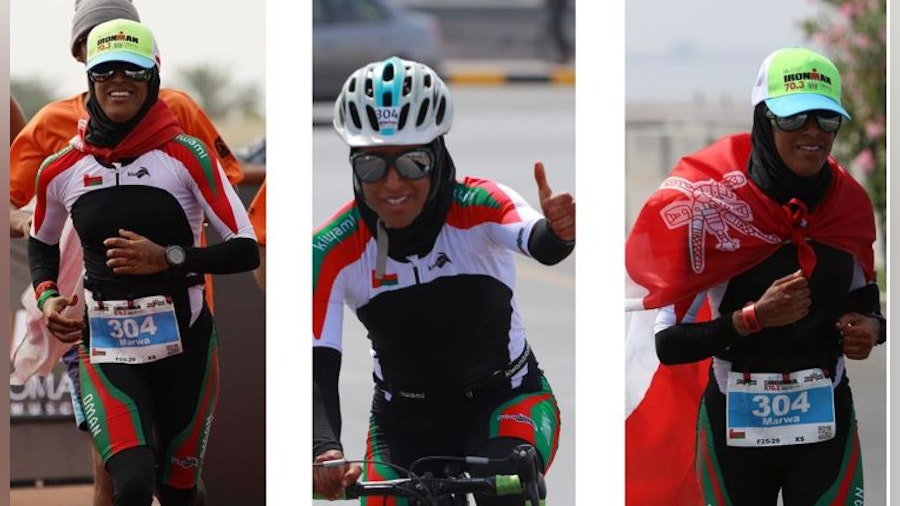 On getting involved in sport development in Oman
My interest started at a young age as I played basketball, volleyball and handball during my school years and was in the first ever Oman Female basketball team representing Oman abroad. I was introduced to Triathlon in 2018 while I was preparing to walk the 760 km across the Oman Empty Quarter as part of the first female only walking team crossing the Oman Empty Quarter.  A friend suggested that I join a triathlon race and I thought of it at the time as an opportunity for an all-rounder activity to help me prepare for the expedition. I am also known in my community to always be ready for a new challenge or adventure. Thereafter, I was involved with the organising IRONMAN OMAN races which immersed me in the World of Triathlon. Finally in 2019, Oman Triathlon Committee was formed by the Ministry of Sports, and I was accepted as a founding member. I volunteered with World Triathlon as a mentor in governance as I had served on several NGO boards in the past. Finally, a very exciting opportunity in nomination for Women’s Committee arose and I was really keen to be part of the Committee especially seeing the very low numbers of women participants in the region. I wanted to be part of the bigger picture of affecting the change.

What is the duathlon/Triathlon landscape like in Oman?
We are at a very early stage of developing the sport. A few years ago, a local sport company, TRI ME, launched the IRONMAN races in Oman and this really had a big impact and shift for the landscape of the sport as many people were introduced to the sport. The number of local athletes has also started increasing with the numbers rising in Oman Triathlon Committee’s first event in 2020 to 50 local athletes. The female numbers are still very low at 3 athletes who have competed in different events in the last few years.

How did the Duathlon concept develop in Oman?
As Oman Triathlon Committee is truly committed to developing more female athletes in the sport and considering the conservative culture where swimming may be a challenge as well as mixed events, the board members suggested that a new event is created. The event is dedicated to women and will be organised by women for women. The purpose to is to break the barriers of participation by allowing a more accessible race for many women both in Oman and across the region. The race distances will start at very short distances and will build up throughout the season.

Who makes up the local organising committee?
Oman Triathlon Committee. I am taking the lead on this supported by the committee member, the committee Chairperson Mohammed Al Obeidani and a group of female volunteers.

How much interest have the new events generated in Oman?
The initial social media posts received a lot of positive feedback and interest in participation.

What expectations do the organising committee have on making an impact on sport and particularly increasing participation with women in sport in Oman?
The impact is that we want the society to understand that sports is for all and that we can enable the participation of all in our communities. For women, we truly believed from the outset that implementing initiatives such as the women’s duathlon can be a steppingstone to introduce many to the sport. This is giving the opportunity to many who may have felt that there were barriers to participate with confidence.

Women in Oman are hardworking, resilient, dedicated, and passionate so I have no doubt that this is the first step to outstanding success for Omani women in Triathlon. So, come and join the event and experience the joy of multisport events where you push yourself outside your own limits and be the best version of yourself.

For more information on World Triathlon Development and Education, including the Women’s Committee initiatives, visit the website.