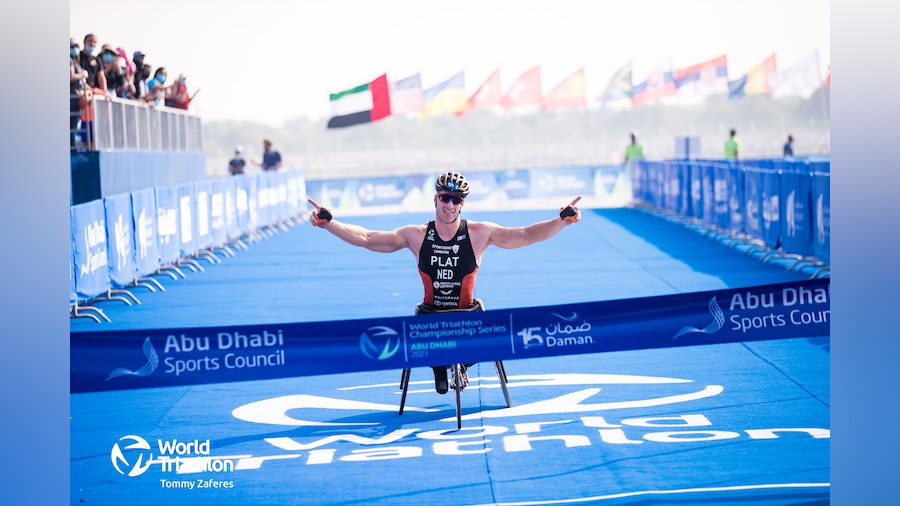 On a great day for the sport in Abu Dhabi, some of the world’s best para triathletes delivered magnificent performances to add a world title to their already impressive season. Jetze Plat (NED, PTWC), Susana Rodriguez (ESP, PTVI) and Alexis Hanquinquant (FRA, PTS4) finished the season in style, adding a World Title to their respective Paralympic golds. USA was the most successful country overall at the 2021 World Triathlon Para Championships in Abu Dhabi, claiming in total three gold medals out of the 12 medal events, while France, Spain and UK won two golds each.

PTVI
The Men PTVI class was the first one to take the stage in Abu Dhabi for the 2021 World Triathlon Para Championships, and it was clear from the beginning that the race will be a battle of two: Dave Ellis -and guide Luke Pollard - and Hector Catala Navarro -and guide Angel Salamanca-. For Ellis, Abu Dhabi was the perfect opportunity to cap a season that didn’t go as planned, missing the Tokyo Paralympic podium after an unfortunate crash. But the British was decided not to repeat the mistake, and he went full gas from the beginning, with Catalá Laparra, silver in Tokyo and two times World Champion, was not able to follow. A magnificent run was enough to grant Ellis his third World title, while the Spaniard crossed the finish line in second place, followed by American Kyle Coon, who took home a bronze on his debut in the World Championships.

On the women’s race, current Paralympic and World champion Susana Rodriguez gave no chances to her rivals, and claimed her third World title in a row, with a magnificent run under the Abu Dhabi heat. The Tokyo heat preparation came in handy for the Spaniard, who showed that she is used to bike and run with temperatures well above 30 degrees. Italian Anna Barbaro tried to keep up with Rodriguez, but a penalty for leaving equipment outside the box made things even more complicated for the Tokyo 2020 Paralympic silver medallist, who just was left to fight for second place. Great Britain’s Alison Peasgood claimed bronze, finishing the season with a high after also missing the Tokyo 2020 podium.

PTWC
If there’s someone unbeatable in the para triathlon scene that is Jetze Plat (NED). Double Paralympic champion, he has not lost a race since 2015 and it was clear that Abu Dhabi was not going to be a different one. The Dutch was the first one on the PTWC class getting out of the water and on that position he stayed the whole race, to cross the finish line and claim the 5th World crown of his career. Behind him, his teammate Geert Schipper (NED) crossed the finish line in second place, while Austrian Florian Brungraber finished a few seconds behind him in third place.

For Lauren Parker (AUS), Abu Dhabi was the perfect set up to finish the season with a high, after the disappointing for her sprint that ended up with her finishing in the second place at the Tokyo 2020 Paralympics. The young Aussie repeated the title she got for the first time in Lausanne 2019, while the upcoming star of the class Jessica Ferreira (BRA) finished in the second place. Spaniard Eva Maria Moral Pedrero crossed the finish line in third, the same medal she got at the Paralympics on the debut of the class at the Paralympics.

PTS2
The season couldn’t have finished better for Frenchman Jules Ribstein, the new PTS2 World Champion, a title that comes just a week after winning the Alhandra Para Cup and less than a month after claiming the European title. The Frenchman, winner also in 2019, crossed the finish line almost one minute ahead of Spaniard Lionel Morales. The bronze medal was for an impressive Wim De Paepe (BEL) on the second race of his career.

It was the American Hailey Danz who claimed the World title in the PTS2 female category, on a race that had to deal with the worst weather conditions of all, athletes starting at the peak of the Abu Dhabi heat. An impressive bike by British Fran Brown was enough to grant her the silver place, while Liisa Lilja (FIN) returned to the competition after the injury that left her out of the Tokyo Games to capture a bronze medal in Abu Dhabi.

PTS3
Another impressive bike segment was the one that granted the athlete representing the Russian Federation, Victor Chebotarev, to cross the finish line in the first place of the Men’s PTS3 class, just ahead of multiple times world champion Daniel Molina, only able to claim silver in Abu Dhabi. Nico Van Der Burgt marked the fastest bike split of the morning, enough to grant him the final spot on the podium.

In the women’s field, with only three athletes lining up, it was the clear favourite, Spaniard Andrea Miguelez Ranz, the one who delivered a flawless performance to grab the world title in the third race of her career, finishing almost five minutes ahead of Elise Marc (FRA), wh finished in the second place. The bronze medal was for Evgeniya Koroleva, representing the Russian Triathlon Federation.

PTS4
In the PTS4 Men’s race, another flawless race for the class leader Alexis Hanquinquant (FRA), who once more didn’t give any chances to his rivals. The Frenchman made the difference with another fantastic swim and powerful bike segments. by the time he went on for the run, it was clear that the rest of the field will have to fight for the other two spots on the podium. Hanquinquant rounded a fantastic year, claiming the Paralympic, World and European titles in just three months. Behind him on the finish line was Japanese Hideki Uda, while rounding up the podium was Alejandro Sanchez Palomero (ESP), a podium that was an exact replica of the one at the Tokyo 2020 Paralympics.

Kelly Elmlinger (USA) is the 2021 World Para Champion in the PTS4 women’s race in Abu Dhabi, finishing over three minutes ahead of Spaniard Marta Frances Gomez, whose impairment are severely impacted by the heat and struggled to make it through the race. The bronze medallist was Elke Van Elgelem (GER).

PTS5
A sprint finish granted USA’s Chris Hammer an unexpected medal at the Men’s PTS5 class, after an impressive run that was almost 40 seconds faster than anyone else, enough to outsprint two-times Paralympic champion Martin Shuzl in the last meters before entering the blue carpet. Second on the finish one was Aleksandr Konyshev (RTF), while Brazil’s Ronan Cordeiro, another member of the new generation of para triathletes, finished in the thrid place.

On the women’s field, it was Great Britain Claire Cashmore who claimed the world title, after beating Grace Norman (USA) in the last kilometer of the run. The two of them were accompanied on the podium by Alisa Kolpakchy (UKR) in third place.

World Triathlon Development and Education has launched its Mentee Recruitment,…
In March, just half a year on from winning PTWC Paralympic triathlon gold in the…
World Triathlon is pleased to announce that it has signed an agreement with the…
more news →