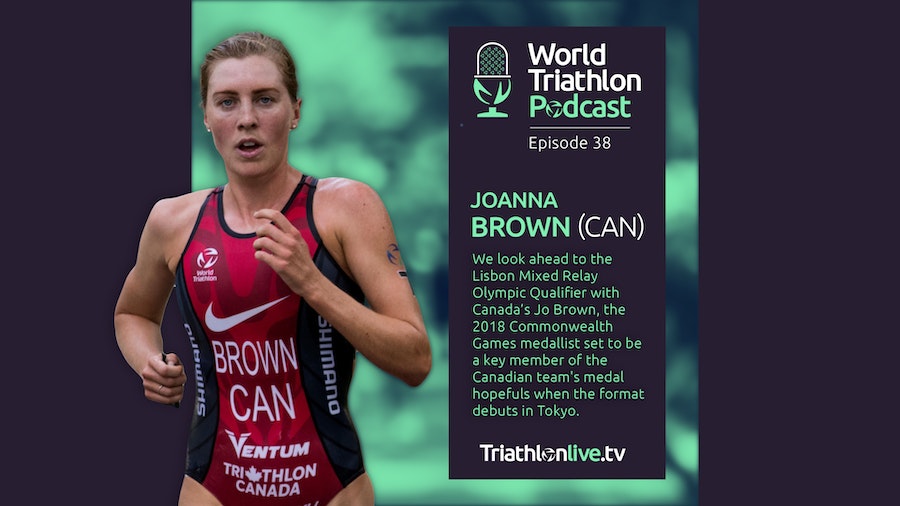 Dialling in from Lisbon ahead of the first World Triathlon Cup of the new season and the Mixed Relay Olympic Qualifier, we had Joanna Brown on the podcast for a brilliant chat covering everything from breaking her nose in the warm up for WTCS Yokohama to Cold War bunkers in her home town of Carp, Ontario.

An infection may have taken her out of the Canadian relay squad in Lisbon, but not before she delivered an entertaining look over her year out from triathlon in 2020 and how the people she has met during her career have enhanced her love of the sport. You can listen to the whole episode on Apple, Spotify and Google platforms.
—

“I was doing some starts with Kirsten Kasper, and I dove in and went way too close to her and it was my own fault, her elbow came straight back, hit me right in the bridge of the nose… I heard the crack,” says Brown, who clearly didn’t let it affect her too much as she tackled Yokohama to finish a fearless13th in her first race back since the Lausanne Grand Final.

“I took 19 months off racing. I lived in Bend, Oregon with my best friend in an RV for about eight weeks and we were just mountain biking, did some running but I think like a lot of athletes when the delay to the Olympics was announced I was pretty lost.”

That friend was USA triathlete Chelsea Burns and rather than dwelling on the Olympic delay, the pair took to the open road.

“I was living in the UK, I was in Bath, and Chelsea called and said ‘what do we do now, let’s go on an adventure.’ After chasing the Olympics for so long I just left my apartment (with British triathlete India Lee), left my car, left my whole life, thinking like everyone it would all be over in a few months. We drove the entire coast from Seattle to California and we just kind of hung out, didn’t really think about triathlon.”

“One thing that throughout my career I’ve learned so much, is that as much as I love triathlon and I love competing and I love representing my country, it’s the people, one hundred percent. And not even from the same country as you. I have some amazing Canadian teammates that I’ll love for the rest of my life, but some of the people that I’ve met on the circuit that you’d be able to live it and to share things with, and who understand the experience and the training and what you go through, it’s unreal. It’s just like this bond that I think, um, has made all the difference and it has made me love what I do.”

Heading straight back to racing with a first World Triathlon Championship Series event and all the added paperwork and life in the bubble could have been daunting, but Brown seemed to take it all in her stride.

“I was just so grateful and impressed that the Japanese LOC was able to host, they did an incredible job and everyone was in good spirits and got it done. Actually it was a really fun week. I mean, I forgot how to build my bike, but had some pretty good snacks to help mix it up a bit.”

You can hear the full interview with Jo on episode 38 of the World Triathlon Podcast.